Since the pool was closed from 5-6, my plan was to be there just before 6 ready to hop in the minute it was open. The ultimate goal was to get back on the bridge to home before the working hoards blocked it up with morning rush hour. It was weird getting to the gym after it was open. Every other day, I'm in the First In The Door crowd. Someone had taken my parking spot (it was another early regular so at least the parking spot was appreciated).

I was pool side ready to play 20 minutes of games on my phone at 5:20 when the pool maintenance guy said "You can go in now!" Nice. I did have a nice swim but I spent much of it talking myself down off the impending traffic ledge. "big deal, you sit in traffic, it won't be forever, you haven't got anything you have to get home immediately for, it's only one day, chill you fool."

I did end up quitting just before the mile - 1,700 yards. I took the world's fastest shower, I didn't even stop to lotion up. In the car, on the road...

The traffic was identical to what it usually is at my regular time. No Big Deal. At all. Now I know. Starting later is not a killer. Totally doable. Nice.

Not nice is my Roku speakers. FedEx changed its tune. Not coming today. Coming Monday. Oh well. Disappointing but not fatal.

I just got the email from USPS about the mail I have coming today.

5 identical envelopes from Humana with "Important Information" promised. And I have some giant $$ to lay on a bet that the information contained within is not only not important, it's totally useless. At least their clearly working on their goal of keeping the US Postal Service in business.

(I just posted that image on Twitter. I wonder how long it will be until the first person (likely male) will be in contact to tell me I should NEVER publish my home address.)

In Mariner news, they are shredding last Summer's team. Shredding. Selling off everyone - in return for kids who aren't ready for the major's yet. This Summer is going to be interesting, indeed. I'll miss some of last year's guys but I think it's going to be fun to see these young kids get their first chance. It's not like we're going to have our first ever losing season. The Mariners have now, for a couple of years, had the longest playoff drought of any professional sports team in the country. Why fuck that up now? Plus, two of my favorite players (Kyle Seager and Dee Gordon) are most likely going nowhere so at least there will be two friendly familiar faces

The ceiling people will be here in a bit to start the fix on this hole they cut in my terrace ceiling about a year ago. 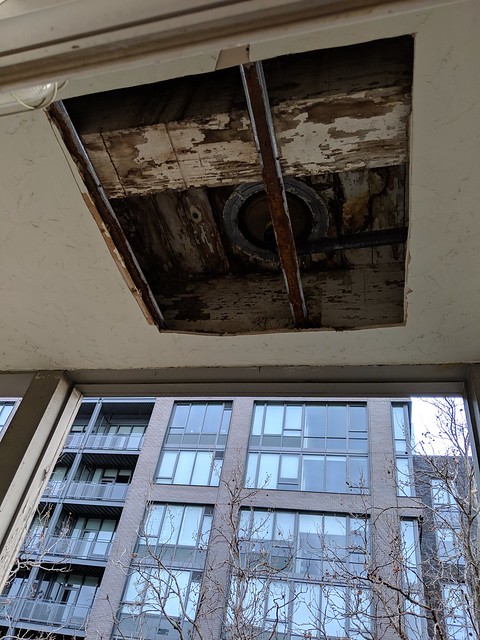 I have some sewing to do while they are here. My condo is kind of a shot gun affair. The door to the hallway - my 'front' door - leads into a long hallway. The guest room/sewing room is the first room off the hallway and then there's my bedroom and then the hallway ends in the kitchen/living room which leads to the terrace. So, my sewing action is as far away from the construction action as possible. Plus, I can't get the workers to just let themselves in. They insist on knocking and making me go answer the door. Much easier if I'm right there.

Ok, they just came in to suss out the deal. I'd better get to my station. 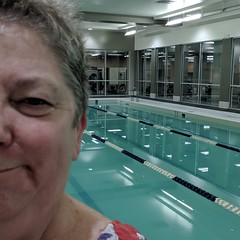 hopefulspirit that she and her new house are fine and did not get earthquaked. That's a lotta shakin' to go through.

My ceiling is hole-less!! 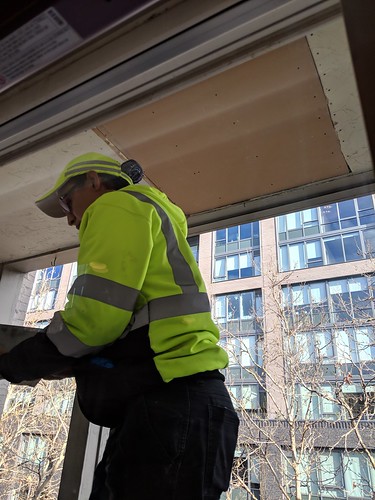 They are a long way from being done but this is enormous progress. So, yeah!!!

The 5 letters from Humana? They were each telling me I had recently changed my password. Of course the reason I had to change my password was that their website sucks to badly and then their system was down. And... that was a month ago. So, yeah, getting a letter about it today - or 5 - was very valuable indeed. Oh and this was not for their main site. It was for the site where they give me Amazon $$ for going to the gym.

Yesterday when I went to Google Movies to cast Book Club I discovered I had movies there I had totally forgotten about - movies that I got for free along the way but also one I bought - Paul. My second most favorite movie of all time and maybe, really, my first. I'm going to have to watch that again soon. So glad I found it.

Ok the guys are now cleaning up and will be out of here soon, Maybe I'll watch Paul this afternoon!
Collapse