This morning I was greeted at they gym by a note that the pool will be closed tomorrow from 5-6. Buggers. I have options but I don't really like any of them. I spent my swim going over each one and voting.

The closest city pool open for early morning laps is closed for maintenance.
The next closest one is just too much trouble to get to.
The next closest LA Fitness isn't really close and is usually crowded.
I could go later in the day but I hate day swimming.
I could skip a day.

So I may change my mind but I think I'm going to just go in a little later and try to get in before 6 or at 6. This means sitting in traffic on the way home since it will be at the height of rush hour. Maybe everyone will take Friday off.

I did cancel my doctor's appointment. Not because of the pool but because ever since I wrote him that note last Sunday, my ear has been fine. Go figure.

After my swim today, I had an interesting conversation with a woman in the locker room.

Last year I joined a gym that had a bigger, deeper pool. It was expensive but the maintenance on my regular pool had gone to shit. The water was slimy green. This new gym was easier to get to and had really nice people and I was delighted. I swam in it every day in November and half of December until I got sick. I was having a really bad COPD month. Really bad. Finally I could no longer swim. And that's when I discovered that it was the pool that was making me sick. My lung doctor said it was likely the chemical make up of the pool's treatment system that was causing my pneumonia like symptoms. All I know was that after a week of not swimming I felt way better and when I went back to my regular pool which, by then, had been cleaned up, it took only a couple of times before I was back to my old form.

I contacted the gym to ask for a refund and they declined and also assured me that my issues were a one off.

Then, a month ago, an RV ran into the pool building and they had to close the pool while they fixed/renovated it.

The woman in the locker room this morning had been in there a few weeks ago and had said that she taught at that other pool. So this morning I asked her when the fixes would be done. She said they had reopened this week. She also said that the fixes were not spectacular and that some of the tweaks made (like to lighting) were annoying.

I told her that I had always liked the pool but that the treatment chemicals did not like my lungs.

That's when she said 'Oh, I've heard that from a lot of people. We had an aqua fitness instructor who had to quit because of it.'

WTF???? One off????? Those buggers. I'd be a lot more pissed but it's been a year and I don't care but still. I am comforted in knowing it wasn't just me.

Oh my Roku speakers are being delivered by FedEx tomorrow! I had to buy them from Roku (rather than Amazon) and their website had language that kind of implied they would not be sending them soon. So I was impressed and delighted to get the tracking number email yesterday. I do hope they are wonderful.

Also tomorrow, they are going to do phase 1 (or I have no idea how many) of the repairs from water damage. First up, close the 3 foot square hole in the ceiling.

So big day tomorrow but not so much today. Today is a day of small todo's. 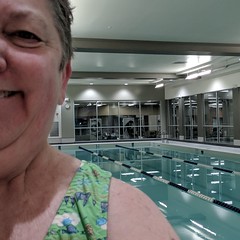 I spent the day making the house tidy. It wasn't in horrible shape but there were just little bits here and there that needed doing. So I started at one end and went to the other, picking up and putting away and fixing this and that.

A random person on the street could have been in here this morning and in here now and not see the difference but I do and I'm the one that counts in this house!

Then I sat down to watch Book Club. I was underwhelmed. It kept my interest but I didn't love it. I liked it $1.99 worth so that worked out fine.

I had the rest of last night's beef stroganoff for dinner. Yummy.

Tomorrow is a late swim, workers on the terrace, new speaker arrival... All good.
Collapse