A few months ago, a really sweet Asian woman came in to swim one morning. It was clear that she was not at all comfortable swimming but she gave it a good try. And then she came back again and again - pretty much every Monday, Wednesday and Friday. She said to me early on that she didn't know how to swim well and was so impressed that I could just go and go for so long. She said she had been looking at videos on the internet for how to. Then she started coming in on weekends and some Tuesdays, Thursdays. Yesterday she brought her iphone to the pool and propped it up to check her stroke against the video. Today she swam solidly for 45 minutes. I told her after that I thought maybe she just forgot to stop.

And in the locker room there was another woman who was on her second day. She said she was a teacher and had been practicing since school started ... practicing getting up early. So she swim before school. She 'also said she couldn't believe how long I could swim. I pointed to the Asian woman and told her to follow her lead and in a few months...

Later, in the car, I thought hmmm in a few months, there won't be room for me in the pool!!

Coming home from the pool, I hit a traffic jam at 6:30 in the morning. A six car pileup on the bridge. Imagine, getting up early and getting ready to head out and get a jump on the day and ending up with a broken car being your good fortune and an ambulance being second place? Just slogging through it tripled my drive time home but at least I got home in tact with an unscathed car.

Turns out the new neighbors do get up and out before I get home from the pool. And they didn't show up again until 6:45 pm last night AND then left again. Hey, boys! What fun is it going to be having you as neighbors if you are never home????

I got a text last night that Goodwill was having a 30% off sale on linens. So I guess I'll pop over and check their stock this morning. People with jersey sheets have not been giving them up lately. My stash of practise fabric is getting perilously low.

Then I'll come back and work on my second stab at the new pattern.

I have three movies on my list that I want to see. I bought and watched Crazy Rich Asians last weekend. Last night I happened into the Google Play store and a little message popped up asking if I wanted a $1.99 video rental. Sure thing! So I got The Book Club. I might save it for the weekend but I might not. That will leave The Post which is on HBO which I don't have OR I can buy it which annoys me so I might just leave it for another year. There is plenty of stuff I have free or already paid for access to that I haven't seen yet.

But now, I need to get off this giant ass and get moving. 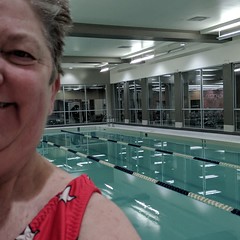 I finally had a very successful sewing day. I feel like all my trial and errors lately have been heavy on the errors. But, today, was a success. I got this new pattern down pat and I really do like it. Then I made a second pattern with a variation from the first so now I have two good ones with set in sleeves. I already have a perfect raglan sleeve pattern.

I want a couple more fleece tops but I have no more fun fleece - only boring solids. I keep putting off going to JoAnne's for more because I know I'll spend more money than I want to. So I looked online and found a nice site that has fleece at about half the price of JoAnne's. Bingo. Fleece ordered.

Of course, since making the doctor's appointment, my ear has been totally fine.

Tonight's dinner will be steak and one of those hasselback potatoes and maybe some corn or snap peas.