I got a cryptic note last week from the building manager that someone would be here today to work on the plumbing lines out on the terrace. It also included a note that I was to clear everything off to make a 5 foot working space around the drain. Since my terrace, like the rest in this building, is only 4 feet wide, I assumed the jackass was cutting and pasting from some memo he found on the street. So 1. I have moved nothing and 2. I'm not laying any money on the likelihood of anyone showing up to do any work at all today. And, of course, no mention of fixing/closing the hole in the ceiling out there or the damage to the drywall in here. But, silly me, it's only been a fucking year since they created the problem. And 3 years since I first reported the leak. So I should just chill.

The HOA president, I believe, is done at the end of this year and a new one will take over. No telling what problems that will cause. My plan is to mind my own business and be grateful the inside damage is actually minimal and whine only here.

The new neighbor boys are either late sleepers OR they got up and out while I was swimming. Dark dark dark over there.

I have a top cut out and ready to sew up. I need to decide on how to do the neckline. I spent some time thinking about it this morning while I was swimming and failed to come up with a great idea. Hopefully one will strike me once I get into it. 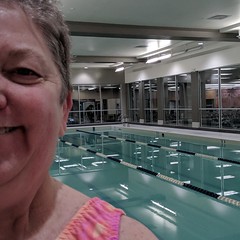 No sign of the new neighbors which is an indication that they got up and got gone while I was at the pool. Hopefully, that means they will be home (and entertaining me) early.

I spent my morning in the sewing room. The serger and I had a fight over threading. I won but the victory came with scars - emotional ones but still. I got the new top mostly built to discover that 1. I love the pattern and 2. this version of it turns out to be a failed test. Not a biggie. I used leftovers and the cheapo fleece. I'm fine with donating it to the scrap heap. I printed out a new version of the pattern and made the needed changes. This go-around will be way better.

I did forget to mention that my Trader Joe's crappy bagels as substitute for stale bread in my latest breakfast casserole worked perfectly!!! Here's what I did.

Two bagels cut up into squares like very large croutons. They were layer one in my square cake pan. Then I added a bunch of mushrooms - probably only about a half to 3/4ths of a cup. They were getting old. Then I cut up 4 cooked slices of spam that were also nearly their End Of Life and sprinkled them over the breadcrumbs and mushrooms.

Then 8 eggs beat up with a bunch of heavy cream and probably a cup of grated cheddar cheese and poured it over everything else and spread it around so that everything had a bit of everything. Then I stuck it in a cold oven and set it for 350 degrees. An hour later I took it out and let it cool.

Then I cut it into squares. I nuked one of the squares this morning and it was perfectly delicious. I have 5 more to go. YEAH!!

Next time probably I will use sausage instead of spam and maybe more cheese. I tucked the rest of the TJ bagels in the freezer so they will be ready.

But the big news is that the drain guy did come. With the guy in charge of making the fixes. Both guys were really really nice. The in charge guy told me that the hole in my terrace ceiling will be fixed 'likely by the end of this week' and the interior sheet rock fix will happen shortly after that. He volunteered this info without my even asking. Impressive. I'm hopeful.

I got a note from my doctor this morning about my ear. He said to come in and let him look even if the appointment lands on a day when my ear doesn't hurt. Friday morning was the earliest he had so Friday morning it is. I feel better with his know that there may be nothing to see. It would be nice to get this fixed. This morning it was too sore to use my earbud while I swam but now feel nearly fine. Friday? who knows.

Today starts Ellen's 12 Days of Christmas. I have watched her show since it first aired and I used to love it. Now I fast forward through anything kardasian, all games, videos where she plays a part in some sketch, rerunned segments, and all of her 12 days crap. So, basically, these days her hourlong show takes me about 10 minutes to watch. Sigh. At least the latest stupid Jeopardy tournament is over. Grumble grumble.

I think I'll catch up with Michelle Obama for a bit.
Collapse