For the past three Sundays we've had a 'new' girl on the front desk at the gym and she's opened early all three times. Today I waltzed in 10 minutes early and she was so nice and friendly. It's amusing to me how much a positive difference that makes in at least the first part of my swim.

I scored 4 banana cakes at trader joes. When I got to check out, once again, the terminal and my phone would not talk. I realized then that it was the same terminal as two weeks ago. The really nice cashier called over a manager who fixed it so I could cash out at another terminal which, of course, beeped success immediately. Now I know. STAY away from the express lane!

New neighbors!!! There are three guys standing in the kitchen/living room of the previously empty apartment across the way. One is REALLY tall. One is bald and one is short. The kitchen is small but they are working like a team. Wonder if all three are going to live there? This could be fun. They already get big points for now closing the blinds. Cracks me up when guys wear their baseball caps in the house. The two guys with hair (at least at their necks) have on baseball caps. Bald guy does not.

They are now setting up the antenna. Good priorities, guys. It's one of those that you suction cup onto the window. They just slapped it up. No care for making it look nice or at least not crooked. Funny to watch them work.

My ear is back to hurting. I swam with only one earbud in today. Just took some ibuprofen and also sent a note to my doctor. Tomorrow I will wake up and it will be better. Or it will still hurt and I'll make an appointment and by the time I get there it will be better and then it will hurt again. This has now been going on for amonth. I'm done. I explained the sitch to him in the note and asked for advice. Probably he will tell me to come on in. And I will.

I've got laundry landry-ing. Load 2 of 3 is in the washer now. And I have bread getting sales on the counter. I'm going to make another breakfast casserole but this time with bread instead of tatertots. But the best way is with stale dense bread. I think Trader Joe's bagels are the closest. They are brick hard when you buy them fresh. I cut them (not easy) into cubes and they are now getting stale.

Probably now would be a good time to get off my ass and swap out the wash for the dryer, clean off the kitchen counter, swap out the paper in the printer so I can print a new pattern (heavier than regular paper needed) and washing up the breakfast dishes. So here I go... 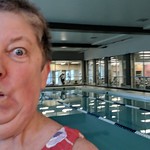 Every single bit of clothing in this house is either being worn by me or clean, folded and put away. Including the two pieces of fabric I bought yesterday. Proud.

I printed out a new pattern and put it together. My printer jammed on the paper. First time ever. I was a little offended. But, finally, it decided to play nice. Then I cut out the fabric using up some nice leftover scraps with that fleece I got at Walmart a few weeks ago.

My breakfast casserole turned out amazing. I packed it into storage dishes that can just go right into the microwave. 6 breakfasts.

I have dinner ready to just nuke. It's chicken and dressing - I made double last night to tonight is easy. I usually have breakfast for dinner on Sundays but, hey, I also like to change it up now and again.

The neighbor mystery continues. Regular sized baseball hat guy is still there unpacking stuff but not making much progress. Tall guy and bald guy are gone but there's a new guy in town helping baseball hat guy (who, of course, still has on his baseball hat). They took down the antenna. I wish they'd turn their lights on. It would be so much easier to see.

Ok, time now to watch CBS Sunday Morning. I like to get it in before Monday morning!

1. They have a 2-3 foot tall white porcelain dinosaur in their kitchen. They had it on the stove and I thought I could get a photo of it but a stupid branch got in the way and 5 minutes later, I went to try again and they had moved it and now no photo possible. Sigh. But, trust me, it's awesome. 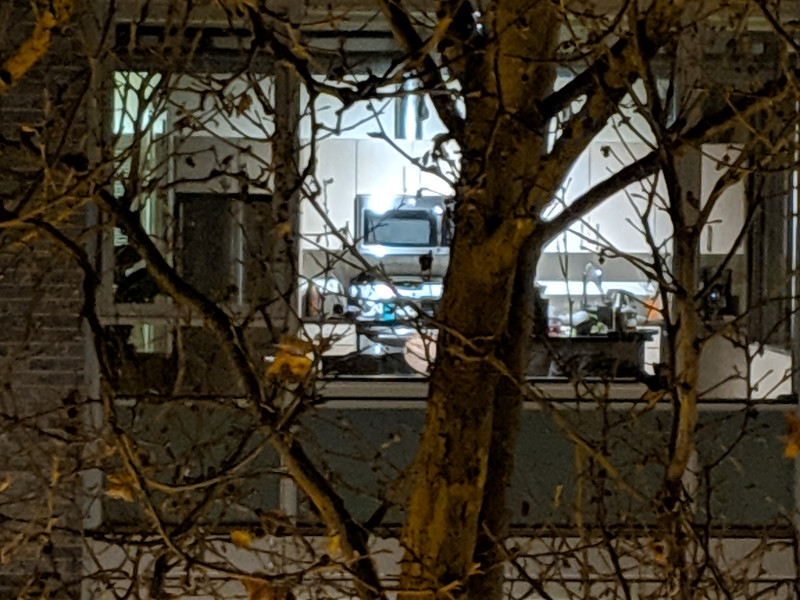 2. Baseball cap guy and Other guy were just in kitchen and clearly sparing in fun when all of a sudden they leaned in for just the sweetest kiss. Awwwwwwwwwww.

I accidently landed on the PBS station just before dinner and lucked into an old, but wonderful Peter, Paul and Mary special. So that was in the background as I read more of Michelle Obama's book. I'm in the Princeton years.

I'm having an historic evening while being entertained by my delightful new neighbors. Oh and the people in the apartment above them put up their Christmas tree and it's beautiful!! I lived here for 20 years when that building was just a parking lot. I love the apartments so much more!

I thought, you idiot, he's too young to even know how to peel it!

Then she turned back to her shopping but said 'ring! ring!' and the kid put the banana up to his ear and proceeded to have a long and involved banana phone conversation. It was still going on when I saw them later in another aisle. It cracked me up and I laughed about it for days. Heck, I'm still laughing.

Just now I looked at my Instagram stories and one of the people I follow has this adorable little boy who has Downs Syndrome. He's always dancing and every day he waters the plants in their yard with diligence and a very empty watering can.

Tonight she (his mother, I presume) caught him talking on the phone. He had what looked like a black iphone up to his ear 'hello? Yes. hello?' Off camera she said 'will you show me your phone?' He held out his arm and she said 'no, not your muscles. I want to see your phone, please.'

This time he held out his phone which was a calculator. Then he started punching the numbers and she asked 'are you calling someone else?' He nodded vigorously and then held the calculator up along side his face and said 'Hello!'

I'm not a kid person. I do not think they are adorable in and of themselves but I am a totally sucker for when they do adorable things.
Collapse