The pool was crowded again this morning. It's rarely crowded on both Saturday and Sunday. Hopefully this will be it for a while. The holidays should clear out the swimming population. The sun's glare was a killer again.

ljtourist asked it my goggles were polaroid. I had never even thought of that. They are not but I just asked Amazon to send me some that were. They will be here before Thursday which is the next time the sun will be out when I swim.

I met him for breakfast today at one of my favorite breakfast places. We had a good visit. It's always so fun to check in with him. We had omelettes with apple, onion, sausage and cheese. The oddest combo and mmmmmmm is it ever delicious. Plus I brought home potatoes for dinner.

I bought a new Pixelbook. I bought the used one last week. It should arrive the end of this week. Today the Google store (and Amazon and several other places) knocked $300 off the prices of all Pixelbooks. And I had a $50 credit at the Google Store. So I bought one.

For those of you keeping score, that makes 2.But, also maybe plus .5. Because my dead Pixelbook has kind of risen from the dead. I heard back from Google support last night. They said they would not extend my warranty. So dead in the water. It had been sitting on the ottoman and I decided to put it away until I could decide what to do with it. But, before I put it away, just for a giggle, I plugged it in and hit the power button.

It came on! Kind of. It came on and told me the OS was corrupt. Better than before. So I left it plugged in and went to bed. This morning I tried it again and this time it let me log in!! I'm actually typing on it now. It does spontaneously reboot every 15 minutes or so. But, actually it's now been nearly 30 since the last time.

Yeah, I'm very comfy with a backup Pixelbook. I love this thing so much and it is the most perfect computer for me. But, 3?? Even I - the Queen of Justification - can't get there. But, seriously, you can't take it with you and I'm sure as hell not saving it for the kids!

Oh and speaking of spending money. Some time ago, I bought a touchless garbage can for the kitchen. A bunch of stupid reasons prevented its getting here until this weekend but now it's here and opening with a wave of my hand. It is truly ridiculous how much this delights me. I love throwing stuff in the kitchen trash now.

But, it's time to lock the wallet down. No more spending. None. The end. Got that? Ok.

Now, nearly an hour without a reboot. Hmmm and yeah!

New person on the front desk at the gym and she opened up 5 minutes early!! The lights weren't even on yet in the pool room. And it was before the sun blasted through. 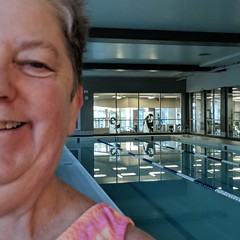