It is 7:30 am and I have spent a bundle of money this morning. I bought a Google Pixelbook (used) and upgraded my Echo Show and Kindle. I think I'm done. I hope so. I also think I just heard my credit card burp.

I did call Google tech support and that was a pretty neat call. Last week I called Humana to get a password fixed. I had to give them my complete personal information - address, telephone number and member number - THREE times only to then be told their system was down. And that was after I contacted them on Twitter and was told they could not respond to web questions/issues. That's actually my usual customer support scenario.

So, last night, I typed in Pixelbook Support. I clicked on Technical. I clicked on 'have someone call me'. I typed in my phone number. My earbuds are right next to my chair. I barely had them in my ears before the phone rang. I had to press 1. And then a voice said "This is Clyde. Hi, Susan. How can I help you this evening?"

It was shockingly refreshing as was the entire call. He presumed I knew what I was talking about, he guided me through troubleshooting with good info (we will need to do this 5 times to get to the next step - it's just part of the process). He stumbled at the end a little but understandably. The next part of the process is that he gathers info from me (serial num, etc) and sends it upstream. They make the next call and then he relays that back to me.

He stumbled because he's pretty sure they will extend my warranty and replace it BUT he can't really tell me that outright. But, the other option is that they tell me to take it to the repair shop which will be costly. I appreciated his hinting at possible outcomes. All in all it was a satisfactory call. And he was very nice to talk to. It will likely be Monday or Tuesday before I hear back from him and another week or two before resolution at the earliest, I'm guessing.

Thankgod I have this little tiny backup that I just got for this very purpose. So at least I have something. A new Pixelbook is $1000. BUT this morning I found a used one on Swappa for $600. I bought it. I'm not sure I mind having a better backup but also I can always turn around and sell one on Swappa or on Amazon.

And then this morning Amazon upped their anti on two things I've had my eye on. The new Echo Show is way prettier than mine but also too expensive to just replace it and also what do I do with the old one? Until now - they have a new trade in/upgrade program. I ended up getting the new Echo Show at half off by sending them my old one.

Then I checked the Kindle I'd had my eye on. About six months ago, I bought a used old one from Amazon. I paid $25 for it. I just wanted to see if it was better than reading books on my phone. Way better, actually. But it needs a light and it needs to be lighter. The new Passport checks both those boxes. AND I got $15 for my old one plus $25% ($20) off. Kind of a win win there.

I think this money spending spree is a Can't Take It With You situation.

I woke up at 2 am thanks to the Seahawks fans who don't, apparently, believe Thursday is a school night. And I couldn't get back to sleep. I started thinking about what if I don't live til my next birthday. Will my nephew be able to get to the baseball tickets without me? Probably my brother would figure it out and they would all be fine but there are no more paper tickets so it's going to be tricky.

Getting up was tough this morning but I did it on rote and my laps turned into my meditation. I decided to buy the Swappa laptop and just not worry about it. And if I don't live to opening day, they will figure it all out and, hopefully, have a great time anyway.

By the time I got to the end of my swim, everything was fine. And when I got home, the Amazon deals popped up so while I was in that vein...

I do have a new kitchen garbage can arriving today so... excitement! 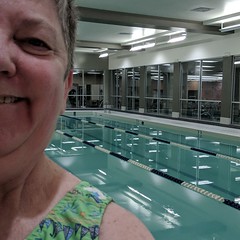 I do not understand the ways of the ticket hawkers for the Mariners. This morning I got an entirely different email with different instructions on how to buy single tickets before they go on sale to the general public tomorrow.

I clicked through out of curiosity and this time they had way better tools. Using the filters, you can actually get a look at the whole stadium and see what seats were available for any individual game. This is what I needed yesterday.

BUT I was rewarded by easily seeing that I did, indeed, procure the best available for both our games. And good I got on it because there were a lot fewer seats available today. So yeah.

I have done precious little today. I keep getting distracted by virtual squirrels.

Also, the apartment across the street - the one I have the best view of - the one I can now finally see into with the leaves gone - appears to be empty!! There was a guy in there today being busy. Finally I got out the binoculars to discover that he was a cleaning guy. Hopefully, he was cleaning it to get ready for the new tenants. He left the light on which is nice for my viewing.
Collapse