I thought it was going to be good. As I pulled up across the street from the gym, I saw a worker - a new person unlocking and going in. hmmm 1. at least someone showed up and 2. new person! When I got to the front door myself the first thing I saw as NO TOWELS. Ha! Been in this musical before so I went back to my car to get my emergency towel.

But, it never really got that much better. The sun was out and glaring into the pool which just makes me crazy. It hurts my eyes and my head and ruins a perfectly good swim. If I wanted to swim in the sun, I would NOT swim inside. I even had on my dark goggles. It was just not fun. So, at 1,050 yards - a little under 60% of my usual - I quit. My emergency towel is for emergencies - it sucks to dry off with. "When will we get towels back?" "dunno. Machine's broken and it needs a part that we have to order." This exact conversation happened a year ago, too. Finally after a month, they started trucking in towels from a service.

Then I went across the street to Trader Joe's. I always pay with my phone at Trader Joe's. It's one of the joy's of shopping there. No purse needed. Today I had a paltry $14 worth of stuff and their terminal kept rejecting my phone's app. The cashier was really nice about it and said several times that she was sure it was their system and not my phone and there wasn't a line but I was out of patience with the world at that point. I told her never mind. None of the stuff in my bag was critical, just to cancel the order. Without blinking an eye she said "no. take it, we'll cover it here." And she handed me the bag. I protested and she said "no arguing, please".

I'd like to think my day turned around from that point. And so far it has so thank you, Random Trader Joe's Lady.

My Tuna/Chicken Noodle Casserole last night turned out to be not bad. Not amazingly fabulous but not bad. Good enough for me to put the rest into individual servings in the freezer.

jwg had a very interesting suggestion for my cooking issues. He suggested I attack cooking like I do sewing. I'm going to have to chew on that (pun intended) but there are a lot of similarities. I do not like to fail at sewing but I do it often in order to get to the successes. Why do I have such little patience with trying stuff that might fail at cooking? I make a shirt and the sleeves are wrong or the pocket's not right. I make another and fix the sleeve and pocket in the second one. Seems like that analogy should be solid for cooking.

I need to conjure on this.

I do have some of that original chicken left and one of my new LJ friends (and I don't even know who - I've lost the connect) posted the most delicious looking salad in Instagram. I am absolutely making this up today. 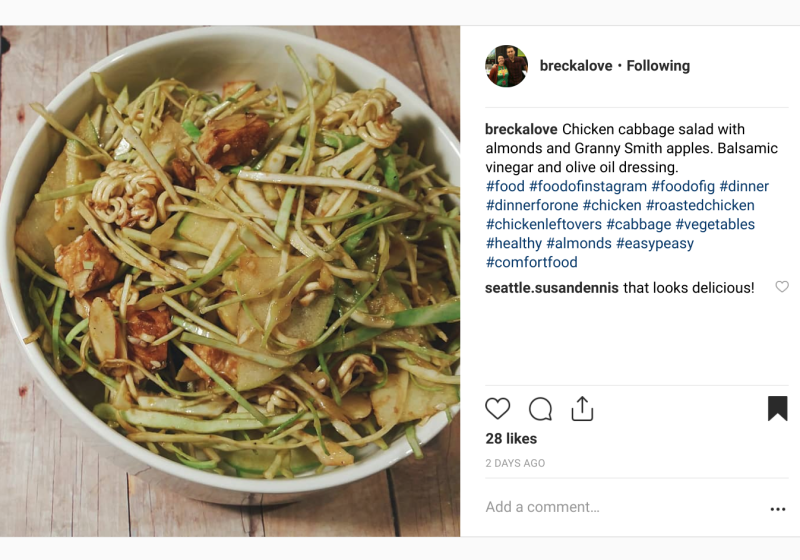 That was my Trader Joe's haul - cabbage, apple, almonds.

Today may be a TV day. I need to find another Acorn series to get hooked on. Plus I have lots of stuff queued up on Prime and on Netflix. So much to watch ... 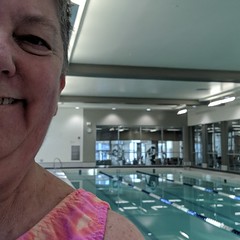 --Lemons. You could easily write a few paragraphs about lemons.
--An interesting movie you saw once.
--Three things about poop. No one ever writes about poop, so you'd probably have it all to yourself.
--When you first became aware of Bob Dylan.
--A random memory from childhood.
--A letter you wished you had never sent.
--Some benign thing that no one knows about you

I am not a big movie person. I am not a fan of movie theaters. And 2 hours of watching one thing at home always seems like something I don't have time for. So there actually isn't much in the movie memory reservoir. 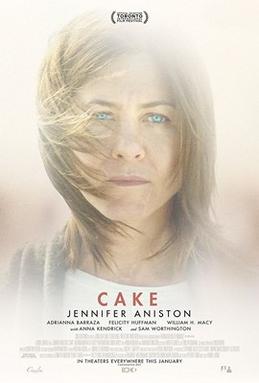 The movie got mixed reviews and I don't even know anyone who saw it but I thought it was amazing. And I thought Jennifer Aniston was amazing. The plot and subject matter are not even things that would ordinarily draw me. Chronic physical and emotional pain are not generally things I enjoy visiting.

But, there was just something about that movie that keeps me thinking about it.
Collapse