I've got a million things on my mind and as I take care of each one or tick off that box, I keep thinking about one of my LJ friends who's everything was just swallowed up in a fire that took the whole town.

flying_blind narrowly escaped and writes about it chillingly. I cannot imagine what that must be like at all. "I just can't organize my thoughts." I only read about it and my thoughts are a mess. I really cannot imagine. And can't quit thinking about it.

The pool this morning was amazing. It was crystal clear which it has NEVER been in its whole life. After I had finished a few laps, a pool guy came in heading for the mechanical closet. I stopped and stopped him to ask if it was he who worked this miracle. He said it was his buddy but they were both in the project. He was clearly delighted by my delight. He said they have a new system that they have tried on a couple of other LA Fitness pools with great success and they are going to put it in here so it should always be this way. fine by me! He said they would be closing the pool for a day to do it. I acted stabbed and he laughed and said that at least it wouldn't take 4 days like the first pool they did. Yep one is way better than four. And forewarned is forearmed.

The weekend swimming shenanigan makers were all MIA today which was lovely. I enjoyed the swim and look forward to tomorrow's.

While I was waiting for the Gym to open, I met two women who where there from the Ballard location. They said they had been told to go use the one on Aurora while Ballard was being redone. But when they got to Aurora they discovered it was closed for maintenance, too. LA Fitness is such a goat rodeo. The two also told me that the city pools are all undergoing or will be undergoing massive maintenance. I just checked their website and yousa! The one closest to me is going to be closed for 5 months. The next closest one is closed now until the end of the year. Wow. I was actually planning to go to one of those two next time mine closed. Glad to have found out this way instead of at the door. The one I went to Friday is new so no work needed and no closures. Whew.

I spent way too much time yesterday trying to get into my Humana accounts. Their website system has always been a mess. There are 3 websites - humana, humana pharmacy and their go365 where you earn points for fitness that can be turned into cash. Depending on how and/or in what sequence you log into these sites they may or may not share a password. Periodically, they shut you out of all sites because reasons. Yesterday I was shut out of all sites. I'd change password, get a response that I'd been successful, get an email that I'd changed my password and then try to login to be told my credentials were wrong. Over and over and over again.

Finally, I called. I told the telephone tree that i had a technical issue. I waited 27 minutes to get a human. She extracted every single piece of personal information from me that she could. She stopped just before requesting a DNA sample and asked "so what can I help you with today?" I told her I had been unable to get new passwords to work. "Oh, our system is down. Try tomorrow."

I did not share with her how I felt at that moment. It was clear that she didn't care. However, the at got an earful.

My crockpot chicken and rice was a 50% fail. The chicken was ok. The rice part didn't work. So I took the rest of the chicken and pulled the bones off and today plan to make a tuna noodle casserole only using chicken instead of tuna.

And I'm doing a million loads of laundry. I changed the sheets on the bed this morning and the dirty clothes hamper was already full to overflowing and I had forgotten that there were to large pieces of fabric in the washer waiting their turn. So... laundry day.

I'm charging my watch and my swim music player. The watch is right at 95% and the player is 91% - I feel like I should offer a prize. I have a shirt to finish in the sewing room and then TV to watch and crocheting to do. A regular day. 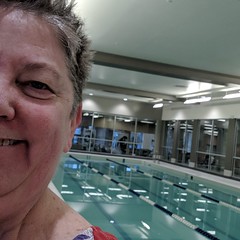 All my life, I've made grilled sandwiches - mainly grilled cheese and grilled peanut butter- the way my mother taught me. The WRONG WAY!!

I actually don't have them often because they are such a PIA. And only in Summer when the butter is soft enough to spread easily. But, in the summer who wants a hot sandwich??

My Mom always buttered one side of the bread and then, holding it precariously on her fingertips, built the other side - spread mayo or peanut butter or whatever while not getting the butter on her and then put it in the pan and then did the other slice the same way and topped it. Cooked one side, flipped cooked the other. Big mess.

Then I saw the first 15 minutes of the first episode of Girl Meets Farm.

She put the butter in the pan and melted it. And then put bread on top of the butter and 'toasted it', THEN she took the bread out of the pan, toasted side up, built her sandwich easy peasy - no balancing on fingers, no butter everywhere - spread what you want, add what you want, then put one toasted side on top of the other and back into the pan to do the other sides.

It make so much sense and make grilled sandwiches so easy! I've had about one or more a week since I made this discovery. Thankgod I didn't die first.

I'm guessing, if only by the nonchalant way she did this, that she did not invent the technique. Probably everyone in the world, except my mother (and her mother) has made grilled sandwiches this same way for centuries.

But, now I'm a member of your club and I'm delighted.

I hate cooking. I really do. More than 3 ingredients is too many. Stirring, PIA. Preheating oven? no.

Every so often I trick myself into thinking I can cook the way I want and produce the foods I want to eat the way I want to cook them -easily no measuring, guessing, using up the stuff in the fridge. My chicken and rice in a crock pot was just such an example. It did not work. Tonight's tuna/chicken noodle casserole is probably going to be the same.

I had a chef once and she made wonderful meals of what I wanted to eat and never once made me eat kale. But, she made my condo stink for days and she was expensive. But man, that was some good eatin'.

On the bright side, my little heater is doing exactly what I wanted. It heats up the room nicely and quietly and then I can turn it off and let everything cool down nicely for sleeping. (I need it really pretty cold to enjoy good sleep.)
Collapse