When I got to the gym this morning, I reached into my swim bag only to discover yesterday's suit in there - cold and wet. I'd totally forgotten to pull it out and hang it up. Thankgoodness I no longer live in the south. It would have grown mold in 24 hours and stink. But, here in the NW it was just cold and wet. No harm really just doh.

The trade in credit from Google hit my account. Nice. Way more efficient than last year. I think it was a couple of months before I saw the $$

Yesterday I took the Google Hub I had ordered and dropped it off at FedEx for return. This morning I got an email that they were refunding me the entire price and covering return shipping. The return policy stated that the shipping cost would be deducted from the refund but that's apparently not true. Nice.

Now I just need to get a refund for the earbuds I refused delivery on. They seem to be stuck in the USPS system. But, they'll get there eventually.

And I'm in a fight with another vendor for $85. I bought a year's worth of service for Scribd from them and the code sent does not work. It was a stupid purchase anyway. And, if they don't give me my money back, I'll just file a claim with the credit card company.

I started and abandoned several books looking for my next read. Finally I happened on The Good Father by Noah Hawley and it is really compelling so far. It's so good that even though I've been waiting and waiting for the new Michael Connelly book and it dropped yesterday, I'm putting it on hold til after I finish this one.

I'm still finding fault with The Bodyguard (on Netflix) but now I'm sucked in. Two more episodes. I do find that I'm spending way less time watching stuff I don't care about since I paired back my cable channels. I used to watch so much Food TV and HGTV and now I have neither. Plus, I killed all the 'maybe some day' stuff I had stored on TiVo. I don't feel like I'm watching less TV (which is fine by me) I just feel like I'm watching more satisfying TV.

Today will be this and that. I think, I might make a Goodwill run. I have some stuff to donate and I can check the shop for fabrics and sewing stuff. Before that I have a tunic that I started yesterday that needs to be finished.

BUT before all of that, I need to go hang up TWO wet swimsuits! 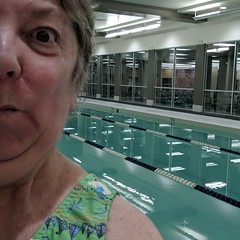 Fortunately, my rational self surfaced before I left for Goodwill...

You are going to Goodwill, when you don't have to, at lunchtime on Halloween? R U NUTS??????

So. Nope. Staying here. Plus, I was going to get lunch and then Rational Self remembered a salad in the fridge that only really has one day left anyway.

Plus, I thawed out some of that spaghetti sauce to make lasagna.

So, if you need me, I'm right here. Not going nowhere.
Collapse