I remember the first big Christmas of online ordering when all of the news headlines were about orders not arriving on time - in massive numbers. It was the year of the Pets.Com sock puppet who died years ago. Yesterday the news was that Target, Walmart and even Amazon have upped their shipping deals in either price or speed or both starting in November.

And, today, my various feeds are peppered with shipping issues. Way more than usual. The sewing thread I ordered what seems like forever ago, Amazon now says will get here today. But USPS says it has no idea when, if ever, I'll see it.

I've long been a fan of Amazon's customer service - making stuff right when it goes wrong but lately, they have not stepped up to the plate with the same level of ways to make me happy. I'm spending a lot more time than I like tracking ordering issues/refunds.

I think it's going to be an interesting holiday season.

On my calendar today was a note to call my lung doctor for an appointment. I was supposed to go back to him last Summer but I never got around to it. I'm going to run out of my stash of inhalers in January. I don't want to get the new prescription until the 2019 insurance kicks in. Even paying the deductible, the December bill would still be $200 more than January's. I have enough to get me through mid January. Dr. Lung is very popular and getting a checkup appointment can take a while. But, I just called and we now have a date for 10 am on January 2nd. Dr. Lung is a sweetheart so that will be a nice way to start off the new year.

I just got a snotty note from the building manager saying I was remiss in filing the required insurance papers due each year. It took me only a few seconds to find the email I had sent to him with the required papers attached. If I had a bigger ego, I'd honestly think that he spends way too much time trying to figure out ways to piss me off. But, the reality is that he does it with little thought at all, I'm sure. Long ago, I started requiring an email paper trail for all dealings with the various managers of this building. Never regretted it once.

I have several errands I could run today but I think the total number that will get done is 0. There's really nothing that I have to and everything on my list would involve my spending money which I really don't need to be doing. So I think I'll stay home and work from my stash of fabric and yarn and food in the freezer.

It's supposed to be a cool and rainy day so good walking weather for me. Maybe a trek out to get lunch? 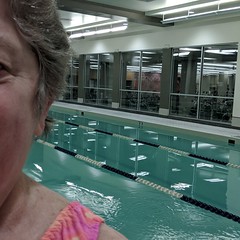 Instead of one coat fits all, this year I wanted a rain coat and an extra warm coat. I figured out the pattern for the rain coat a while back. The fabric was hard to find and the thread has been a bitch to get.

But the extra warm coat has been a project - the planning of it, I mean. I found several patterns that I thought would work but I could not decide which one. I've been hunting and deciding and picking and choosing now for a month. Then last week, I started to get an idea.

I have a jacket/wrap pattern that I dearly love. Easy on and off, comfortable, nice looking, etc. So I took that pattern and made it longer - car coat length - and made the fronts wider so they overlap/wrap nicely and then made the high collar into a hood. In my mind.

I lived with that idea for a while and today got the pattern out and fiddled with adjustments. I made a test hood and figured out how to set it on the collar and then found some perfectly acceptable fabric in my stash.

I made two coats. One blue/one brown. Tomorrow I'm going to turn one inside out and sew it to the other all around the edges. I'll have one reversible, really warm coat. I got it all ready to join up today but it was too late to finish so tomorrow.

I'm quite jazzed about the idea. And have my fingers crossed that there's not some fatal flaw in my plan.

Spaghetti for dinner. I'm going to toast a bagel and add garlic butter to go with.
Collapse