When their stadium is your front yard, you tend to adopt the team calendar. Today is no home game so a lovely, tidy, peaceful morning. I always feel badly about bitching on the Seahawks. But, I don't get or like football and I resent what the Seahawk fans do to my neighborhood so it's hard not to bitch but lovely when they all stay home on a Sunday.

I had a great swim today. A couple of weeks ago I thought maybe I'd cut weekend swims short and/or even skip them now and again. They were becoming a chore. But not this weekend. The mean, old snarly guy who usually works the front desk on weekends was not there yesterday OR today. He was replaced by a really nice, cheery young guy who opened up 5 minutes early! I so hope this is the new norm.

The check engine light is still on and has been joined by the tire pressure light. I wonder if the problem is lights? The tires look fine and it still drives perfectly. My OBD gizmo is currently for a gasoline tax test and I can't get to the data. So I can't see the check engine problem. I've been meaning to get a readable one. So I went to Amazon to see what they had with Deliver Today options. I bought this one. And then also bought this tire pressure checker inflater. Sometimes when I order later in the morning, I get it very late that night but sometimes it gets here mid-afternoon. I'm sure hoping for the ladder but anytime today is good. Thank you, Amazon.

I need to wipe my phone and get it boxed up for return. I'm sending my Pixel 2 in for a $327 trade in. I could have sold it on Swappa or Amazon or eBay but the hassle. Especially after my recent eBay kerfuffle. (BTW, she has so far left no feedback at all nor has she sent me any info about where to send the $13 that i told her I would refund.) Way easier just to send it to Google. They sent me a lovely box with nice padding and a label all ready to go.

When I opened the door to the condo coming in from the pool, I got hit in the face with cooking stink as in 'somebody made spaghetti sauce in here recently.' So time to fumigate. I have a very small old crockpot so I dragged it out and filled it with water and added cut up oranges and limes and a cinnamon stick and plugged it in an outlet in the middle of the condo. About an hour later, I went back to check on it and smelled nothing. I looked and DOH! I had put the fucking lid on it. Way to waft the citrus fragrance! Lid off now and smell in hallway is way better.

Whew. The Dodgers made it to the world series. They were playing the Brewers. Had the Brewers won, I would have had to pay attention because massive underdog situation. But, Dodgers? So don't care. Boston? I'm glad it's not Houston but again, don't care. Spring training starts in 4 months. I'll care then.

Time now to get off my butt and get some stuff done. Like breakfast dishes washed for starters. 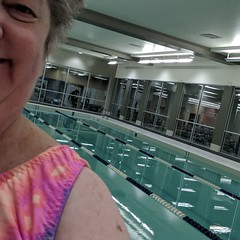