My new phone arrived yesterday and I love it so much. It's a Pixel 3 and I've listened to and read a bajillion reviews and discussions and was sure there would be no surprises. And, yet there was one massive one. It is the same physical size (but a tiny bit thinner) as my old phone but has substantially more screen real estate. It's amazing.

I noticed back about Windows 95 that with every update and new release, I'd discover some very cool new feature only to find out that it has been there in the previous release and I'd just never found it. Same now with phones. My brother turned me on to this one that may or may not be new/better with Pixel 3 but the microphone is wonderful. Dicating instead of typing is wildly accurate. I am far more accurate with my voice than with my phone typing. Very cool.

The check engine light came on in the car this morning. I think it might be something in the minor-nothing department. I hope so. The car runs fine. I think I'll give it the black tape fix until I can take it in next week. I sent an email to my car fix it guy. I'm pretty sure he does not work on Saturdays and they are closed on Sundays.

At least the new phone is paid for. I was hoping to keep that my major expense of the month but that car may have other ideas.

It's nearly noon and I still haven't gotten started with the day. That's what I hate about the gym not opening til 8 by the time I swim and run errands, the day is gone. Sigh. Oh well. I'm just about caught up with the internets. The kitchen needs attention next. Oh and I need to vote. I got my ballot yesterday. I want to get it into the mail today.

I have a shirt cut out and ready to assemble, I whipped up some socks yesterday out of scraps because my feet were cold. Turns out I love them. May be making many pairs. I have lots of scraps. And TV to watch. Better get to it. 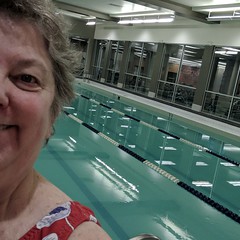 I had too much meat but then I did have the matching amount of everything else so bottom line, I made enough spaghetti to last me until the end. Even if I lie to be 90. Geesh. In the freezer I have baggies of sauce, baggies of cooked pasta and then a couple of dishes of sauce and pasta together that are about a meal and a half each.

And I made a huge mess and I cleaned that huge mess up. So all's good. I did a little sewing and a little organizing. AND I voted.

I'm so sorry that I won't live long enough for the era when after you've voted, you are no longer exposed to any election ads. It's a waste of money for the candidates and it annoys the heck out of me, so those will be good times.

Now I think I'll start on my second crocheted sock while I clear some stuff off TiVo's harddrive.
Collapse