My swim this morning was better than it has been in days or weeks even. I felt like I could go on forever. No arm soreness or breathing issues or boredom. Just swim swim swim. Yeah!!

I have now hit the last time I'll ever sell anything on eBay. The buyer for my cups turned out to be pissy. The entry said - in a couple of different ways - that the sale was final with absolutely no returns or refunds of any kind under any circumstances and that I would pack with care but not be responsible for breakage. Of course, she says, most were broken. (She did include photos.) She also threatened to write a bad review and asked for a refund of some of the money. I don't take kindly to threats. So I responded that I don't like threats and reiterated the warnings in my listing. BUT, I also explained that I was done with eBay so she could leave any kind of review she wanted. I couldn't figure out how to refund her money and told her so but also told her that if she sent me her email address, I'd send her half of her money back.

This morning I got an email saying that she was going to leave me a bad review. I replied that I was fine with that and would still send her the $13 if she let me know where to send it. Fuck it. I don't mind shopping on eBay now and again but no more selling attempts. I knew it wasn't worth it and should have followed my gut. Oh well. Hopefully she'll get some satisfaction out of blistering my hide with her horrible review. It's the least I can do.

My basic cable has no true cable channels and I find I miss it more than I thought I would - TBS, HGTV, Bravo. BUT I am discovering more and more fun programming on CBUT - Canadian TV from Vancouver! Sadly the channel is not a high definition channel but still. I used to watch House Hunters a lot. Now I watch Escape to the Country. Which is actually far more interesting and well done. Last night while I was watching, at the commercial break, they touted another one of their shows - Baroness von Sketch Show. I LOVE this show. I used to get it on Bravo, I think. It's a gem that nobody knows about but me and I love it. I'm so jazzed to get it back.

Nothing exciting going on here today which is fine. I think maybe I'll do some laundry. And some sewing. And the rest of the usual.

I'm excited to start work on my rain coat but want to hold off until I have everything. I'm waiting now for cone thread. Lime green. Due in, hopefully, by the end of the week. 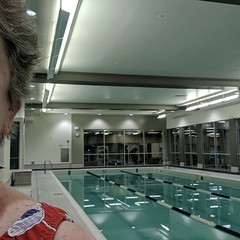