Last Saturday, the pool was packed. I think a couple of people left rather than fight for a part of a lane. Today, for most of the time there were two of us. Finally there were three. Then the other two left. When I finished my 1800 yards, there was no one in the entire area but me. It was so peaceful and wonderful. I spent a good 10 minutes just fucking around in the water. Walking, floating, making big circles. Finally hungry chased me out but it was a treat.

I did some food thinking and I think I'm going to just start from scratch. I'm going to go through the freezer today and toss out all the unidentifiables as well as those things that fall in the 'maybe some day' category.

Then I'm going to make a plan - not entirely sure about those details yet. It may be as simple as working 2 to 3 days ahead. What's for dinner tonight? Tomorrow? Monday? What's for lunch today, tomorrow, Monday? Meals for 1 are about the most boring and/or expensive thing in the world. However, I have been making meals for 1 for going on 40 years now. You'd think I'd have it figured out.

Today I'm going to make a slow cooker ginger beef thing. After that will be a big batch of red spaghetti sauce -tomorrow or Monday. Saturday and Sunday lunches are really egg brunches and Sunday night dinner is waffles or pancakes. So, see? Almost a plan already.

I have several packages coming via USPS that I have no idea about. Two are scheduled to arrive today.

I order a lot o' shit online so I get a lot of packages. But, I have an intricate system of tracking everything from purchase to delivery and even return/reimbursement, if applicable. There are no less than four packages from three different shippers on the USPS website right now that are a total mystery to me. Two look like they might come today and one Monday and one has no delivery date yet. So weird.

Back before Google and Amazon got into a pissing match over cameras, I used to be able to watch Nest cams - like my brother's on my TV. But then they got into a slapping war removed the Nest app from Amazon and I never figured out another way. And believe me, I've tried.

Then, this morning, my brother sends me a picture of his Nest cam streaming on his TV and his TV is identical to mine. And he's busy with life and won't reply to my HOW THE FUCK DID YOU DO THAT????? email. Seriously, how mean is that??

But, it appears that Front Door TV Network may well be in my future!!

There's a little cafe not terribly far from here - just far enough to be not convenient to go to often but not so far to be a BFD. They just posted a photo on Twitter of their eggs benedict with fried green tomatoes. Tomorrow for brunch.

Now I think I'm going to get that ginger beef into the instant pot and get going on the rest of my day. 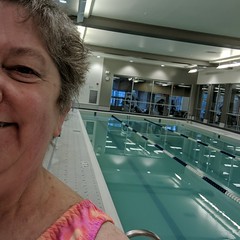 I just Marie Kondo'd my freezer and fridge. The fridge was easy but the freezer. Jeesh. I touched every single thing in there. I deep sixed the elderly and the unknowns and anything that didn't bring me joy.

I found some Popeye's fried chicken!!!

Also Trader Joe's bagels have to be the worst bagels in the entire world.

Off to the dumpster.
Collapse