This morning's swim was the most productive in a long time. I figured out a great solution to my winter coat problem. I designed it in my head and found answers to a couple of obstacles. I'm going to make a double fleece coat - double warm and reversible. I have exactly the pattern - it's a jacket I made last year. I'm going to add a hood to the collar. The sleeves are pretty wide which is fine but not always so I'm going to create a channel and feed corded elastic through with these fasteners for when I want them cuffed.

I might make up the fabric from bits I have on hand or make just one side out of those or use two whole pieces of fleece. TBD. Anyway all totally doable with stuff I have on hand! I already planned for a rain coat using a pattern I've made a couple of times already. Fabric for that will be here Monday.

Also while I was swimming I realized that my current phone car mount, which I love, might not work with the new phone. This could be a situation. Also I think the Google wireless charging stands that I ordered are way too expensive and unless they turn out to be some kind of magic, Google will get them back.

And for the 6th day in a row, there was hardly anyone at the pool.

Another day with no specific plans. My eBay auction ends at noon. I was going to just leave the box downstairs for the mail carrier to pick up today or tomorrow but maybe I'll go ahead and run it up to the post office myself. And get some lunch while I'm out.

I'm settling into Fall TV. New Amsterdam and God Friended Me are coming out on top. Also FBI. 911 seems way better than it was before. This is Us and A Million Tiny Pieces and MacGuyver are getting stockpiled for when I run out of the good stuff. Turns out I used HGTV for TV filler and not having it is turning out to be weird. But, not fatally.

I'm smack in the middle of Robert Galbraith's Lethal White and am enjoying it enormously - way better than his (hers actually since he's really JK Rowling) earlier books and liked them a lot. Plus, I pre ordered the next books of two of my favorite authors - Lee Child's newest Reacher and Connelly's newest Bosch. One of them will be out when I finish this book and then the other one when I finish it. So. Yeah.

I heard this morning on NPR that in a backlash from the Kavenaugh hearings, voters (and mostly women) are so annoyed by the way the Democrats handled themselves over that, in one local Congressional race, the pendulum has totally moved from the Democratic woman running to the Republican man. Great. Just. Great. I'm not anywhere near a fan of Trump, but so much of the anti Trump stuff makes me want to remind about The Little Boy Who Cried Wolf.

I think I'll go put my head back in the sand. 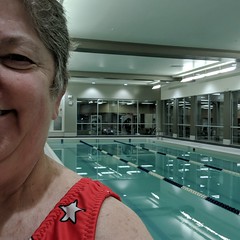 I loved this new pattern. Well, I loved the drawing of it. First I made it out of good fabric. Stupid idea. I tossed it all out - the fabric and the pattern. Then I went back to the drawing board. I printed off a new version of the pattern in a smaller size and started all over again. But, this time with fabric that I really didn't like at all (no idea how it even got in my stash). Well, that fabric is no longer a problem. Try number two was as much of a failure as the first one. I give up. I decided I didn't like that pattern after all. Oh well.

I did get some things fixed. I made a new strap for my bag and did some mending of stuff. And then just kind of frittered the day away doing this and that.

Much like the fabric, I made dinner out of the freezer and I ate it but it really wasn't any good. I need to revamp my meal situation. It's really disintegrating. My old standbys are standing by and my new tries are not that good. Maybe I need to make that a topic for one of my morning swims. I'm going to start calling the pool my think tank.

On the bright side, I discovered today that my Echo Show now has a screensaver app. I can have a disco ball, a koi pond, an aquarium, a lava lamp and an ocean on a beach. With sound if I want. It's kind of cool.
Collapse