In addition to The Tree That I Hate losing its leaves so I can see the world around me once again, Fall brings dark so my neighbors turn on their lights! My just across the street neighbor who moved in just as the days got longer and the tree got leaves - so I haven't really 'met' him yet - is in his kitchen making breakfast. Hi, guy! It's me, your nosy neighbor!!

My swim this morning was good. Doing the full 1800 was not a problem at all today. Unlike last Monday, I had the pool mostly to myself. The gym didn't open until 5:05. They are changing morning desk people again. Apparently, in addition to getting the gym open at 5, they want the morning desk people to also do their bill collecting phone calls and this is what's driving them all away. I don't really care as long as they open at 5 or even a little early.

Today's job is to make my now annual call to Seattle City Light. I use their Budget Billing Plan so I'll have the same amount deducted every month. Their estimating system and their billing system are apparently two different systems. I currently pay $88 a month and at the end of the year (this month) I have paid $58 too much. But, I got a letter Saturday saying that my plan has been recalculated and now they will charge me $144 a month. Their estimating system thinks I now pay $88 twice a month and they are dropping that down to $77 twice a month. But, their billing system only bills once a month. So I'll call today and get it fixed. Last year I got a really nice guy. If I get any flack this year, I'll just opt out of the plan and pay whatever the raw amount is.

Edit: Called at 9:15 on a Monday morning and the call was answered immediately by a live person who turned out to be even nicer than last year's guy. Problem fixed in less than 5 mins. Monthly charge for electricity is now $72. I can live with that!

My brother moves into his new house today. He kindly set up his Nest cam in the living room so I can watch the action.

I'm pretty much caught up on all the new TV shows and I have to say I'm kind of impressed. While I'm not wild about all the new ones, there are enough to keep me entertained. FBI, which I was on the fence about with episode 1, got substantially better for me with episode 2. None of the new shows have so far been cancelled and several have already gotten renewed. Usually at least one or two have been shot to death by the networks by now. Interesting.

No other special plans for today. I'll walk around the block but that may be it for big thrills. I'm saving all my inthecar errands for Wednesday when the house cleaner is here. 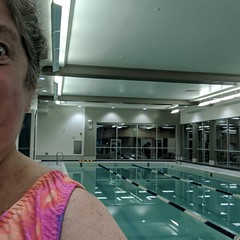 I almost always make a new pattern out of fabric I don't care about - a sheet or some cheap stuff from Walmart. This last new pattern is very tricky with much different architecture than normal and some dubius sizing issues. But, did I pull out the crap fabric first? Fuck no. I cut right into the good stuff and it was a 100% absolute total failure. I'm not happy with me about this. Not one single bit.

Now I will start from scratch, new pattern (same top but a size smaller with no alterations) and crap fabric and try again. Dear Self, Remember this, k?

Then I decided to do my after lunch walk. I'll go up to the post office and get a box. One of the standard shipping fee boxes. I walk up the street in the drizzle to find the post office closed and 3 people camped with all their worldly belongings in the entry way. It's a federal fucking holiday. A minor one but one that closes post offices. Fuck.

At least I got my walk in. And, when I got home, I found one of the USPS boxes in my stash so ok.

I got a bid on my eBay'd tea cups so I know I'll be shipping them out on Friday. I thought I'd go ahead and get them packed up. The Friday I can just slap a label on and be good to go.

But right now Zoey wants to console me with a bit of a cat snuggle so Ok.

I totally understand why Columbus Day has been changed to Indigenous People Day. I get it, but I was not offended by Columbus Day. I understand why the Atlanta and Cleveland baseball teams have names that offend some. But none of that bothers me much.

I'm offended by people speaking in accents that are not their own.

I used to be horrified when most people describe women as bitches, dames, babes, chicks. Now, with a couple of exceptions dependant on context and tone, it doesn't bother me. Oddly when a man refers to his wife as The Wife, that just drives me nuts.

But, really, the older I get the less I'm offended by much.

It can be exhausting to ensure we respect the sensibilities of everyone we meet but, the older I get, the more important I think it is. And, the more that when those sensibilities are ridiculed by others, the more I see societal breakdowns.
Collapse