Today is the home opener for the Seahawks. The parking lot parties that happen in the mile or two past the stadium* (away from downtown) were already mostly set up and going when I drove by on the way to the pool at 7:30. On the way home about 9:20, the were in full force and there were twice as many.

*The actual stadium parking lot which is directly out my living room window, is quite small. Tailgating is minimum because of of its size and the cost but mainly because, there is no drinking allowed. This year, particularly, going to a Seahawks game sober just seems pointless.

They close off a lot of streets around the stadium, and, therefore, around my building. It can be very tricky to get home. It's like a corn maze with idiots in cars ahead of you who have no idea what's happening and so just essentially park in the middle of the road. Also now you can add in Uber drivers who pick up and drop off people in the middle of the road whenever they want.

I got to the street my garage is on just as the police were putting out the STREET CLOSED signs on my end of the stadium. I felt like I dodged a bullet.

It did remind me to go through and mark up my calendar for all Seahawks home games. I will need to remember to high tail it home from the pool on those days.

The weird part of that dream was that is was not weird at all. There was not one single element that was dreamlike. She was Mom. It was my living room, my vest. The conversation was 100% credible - in content and syntax. The only thing that was dream like was her being dead now for 13 years. Wild. Anyway, I'm totally going to finish that bottom 3 inches. Mom told me to!

But I'm not going to do it today. My arm is killing me. I very nearly stopped swimming early because of it. Weirdly both arms are sore but my right one particularly. Between the shoulder and the elbow. It could be the typing on this laptop, the knitting, the computer games on my phone and tablet, the crocheting, old age, sun spots, who the fuck knows but I'm going to start with the crochet - start as in stop. For today.

I do plan to cut out a new top from some dinosaur fabric, make chex mix, make chicken salad, watch the baseball game, finish the episode of Jack Irish I started and watch CBS Sunday morning. 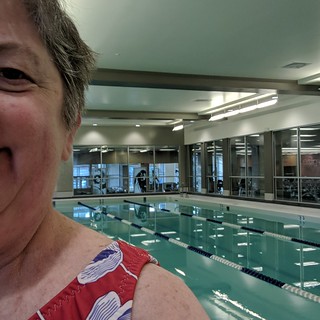 One of the trivial games I play on phone/tablet is Gin Rummy. The app has 6 different ranging from stupid to pretty damn good. You start with the stupid guy and move on up to Mr. Gin Rummy.

So, yeah, now, when I play those six fools on my phone, they get suprimo trash talk. No extra charge. I do crack myself up.

I made a batch of chex mix. It is the same as always but it turns out to not be my heart's desire. Have I outgrown chex mix???? Maybe it was just the first handful and it will be better tomorrow. Happily I like the cereal as cereal. I mixed up all of it and put the un treated/baked in ziplock bags. I kinda wish now that I'd left the pretzels out. But I can pick them out before I pour the milk over, I guess.

I cut out a new shirt. Dinosaur shirt with one yellow sleeve and one blue one. I think it's going to be fun looking plus I didn't have enough dinosaur fabric to do the whole shirt or enough blue or yellow to do both sleeves. Fabric economics. 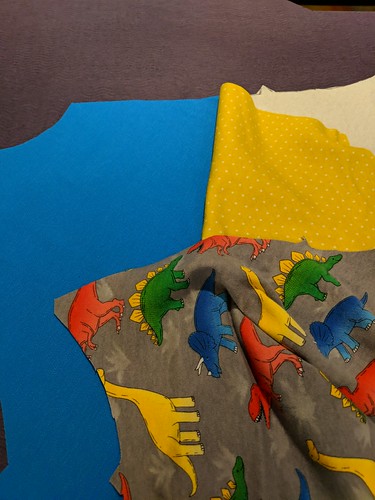 The Seahawks won and the crowd was not that obnoxious and at 6:30 the crowd is nearly all gone. Not so bad.

The chicken salad I made was also mediocre. Clearly I am not a fan of my kitchen work today.

I killed an hour trying to refill prescriptions. The Humana Pharmacy site would not let me delete an invalid credit card nor add a valid one. I tried on two different computers, two different browsers and a phone app. Fortunately, I'm a good 6 weeks from actually needing the refills. I figured I'd just go ahead and get them and then have all the drugs I need til January when Medicare starts paying for them again. But, not today. I'll try again next week. I think I'd rather go without than call their stupid 800 number.