I spent much of last night finishing up the vest I've been crocheting. I do not crochet ergonomically and today my upper arms, particularly the right one, is killing me. It bothered me a lot while I was swimming. I've been knitting, nearly every single day, since I was 5 so that's 65 freakin' years. No problem. Take up crochet and OWIE!

Clearly I need to make a change. Maybe it's as simple as a pillow under my elbow. We'll be trying different things. And, it turns out, I think I need another two inches or so on the bottom of the vest. Maybe. I need to fasten up the last side and do some trying on.

After my swim, I went to a coffee shop near the pool. A baker I follow on Instagram announced she was having a pop up shop there today at 9:30. I got there at 9:35. No sign of pop up shop and after standing at the 'order here' window for a bit, none of the 3 guys behind the counter seemed to see me so I left.

I decided to try a little Bistro place across from Safeway. I had eaten bruch there when they first opened and was underwhelmed. Maybe they have gotten better. Er, well, maybe not. The sign on the door said they are closing for good and moving on with their lives.

I went to Safeway and picked up a few things and by then it was 10 am. There's a barbecue place between there and home that has started serving weekend brunch. I'd never been because they didn't start til 10 and by that time I was home or somewhere else. I pulled into their parking lot to discover that, apparently, things have changed. The sign says open for lunch at 11.

I get the message. I came home and fried up a couple of eggs and some bacon and made toast. Done.

There are 8 more baseball games for the Mariners to play this season but they are clearly done and over it. Last night they played a team that is so bad they had just, earlier in the day, fired their manager with only a week and a half left to go. But, hey, they were still good enough to be beating us 8-2 when the rains came and they called the game done. Yep. We can put a fork in it.

At Safeco, I picked up the fixin's for some chex mix. I love the stuff but I love it my way. Wheat, Rice, Corn chex cereal and pretzels. No peanuts. No funny stuff. Just the basics. I'll be making up a batch maybe today, maybe tomorrow.

I do think I'll finish up that hooded jacket today. I've now got other things I need to make. 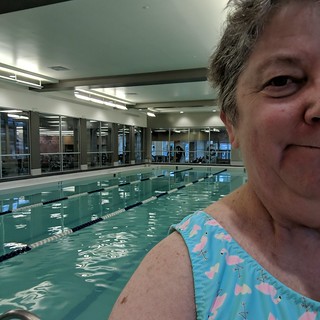 jaywil, asked about my swimming in a comment and I found the questions so interesting, that I promoted it!

"Just curious, but what made you choose swimming as your exercise of choice? Were you always good at it? Do you ever change strokes? Did you always do some sort of exercise with the same passion?"

First of all, I never ever ever had a passion for exercise. Ever. My passion is for sitting on my butt. I was grown before Title 9 happened. And, in the south. Girls were not expected to do anything that might circumvent their reason for being on earth - to find a husband. We were allowed to play outside, but, since we were not allowed to wear pants, physical activity was limited by default.

In high school (an all girls southern finishing school, we had physical education classes. In the spring and fall, we played field hockey. I hated it but discovered I could stand with my stick on a corner of the field and not move and no one cared. In the winter, we did modern dance. Don't even get me started. My most fun year was the year I had my appendix out and got a free pass from PE for that entire winter.

In college, we had to have 2 credits of physical education. I took bowling for one (and dated the bowling teacher for a while) and golf for the other one (I finally did hit the ball once, I think.)

Once out of school, I did nothing. No exercise at all if I could help it. I was fit enough. I mean I could walk as far as I wanted and climb steps without a problem. I just never thought about it at all and never went out of my way to do anything physical. I've never loved the outdoors and I found gymnasiums creepy.

In the mid 2000's, I went from a job where I walked a mile to the bus twice a day to working from home. I spent nearly a year walking maybe 50 yards a day or less. I spent weeks without leaving the house. And one day I realized this was not working out that well for me. I was sore and tired and out of breath and needed to stretch.

I started going to the gym across the street every day. I walk on the treadmill, do floor exercises, and weight exercises. I took a cross training class once a week. I even had a trainer for a while. I hated it all so much, you cannot imagine. I mean I hated every single minute of it. I forced myself to be there a minimum of 30 minutes and each one of those minutes felt like an hour. This went on for a year. A miserable year.

I had a friend who did water aerobics at a city pool and one day I decided to try that. It took me less than 5 minutes to know I'd found my bliss. Being in the water was amazing. Freeing. There was no sweating. There were no mirrors. I wasn't even fat. I floated! I felt graceful and marvelous. Before the first class ended, I was addicted.

I quit the gym HALLEFUKINGLOOYAH!!! And started going to as many water exercise classes as I could find. I went about 6 times a week. After a few years, I got tired of having to find a class and work around their schedule. My first teacher turned out to be the best by far and the rest weren't nearly as good or as much fun.

So I started doing laps. I could do them when I wanted. I signed up for a private lesson to make sure I was swimming the right way and to review the right way to do the different strokes. And the teacher gave me a routine to do every day. I did that for about 3 months and then I hired another teacher to check me and answer all the questions I had accumulated.

One of those questions was do I have to do all the strokes and rests and a specific routine if all I want is to stretch out and get some exercise? And the answer was no. So... I started just doing the front crawl. I'd get in and go until I got tired. But always a minimum of 30 minutes. Then I started stretching it out and counting my laps and then I was really close to swimming a mile which I thought was very cool.

And then one Sunday, I did swim a mile. It was the most amazing feeling of accomplishment. It took me an hour and it was a glorious hour. From then on, I swam a mile every time. I swam 6 days a week and sometimes 5 because city pool lap times were not great. Then LA Fitness opened up in West Seattle and they had a pool that I could use 7 days a week.

That was May, 2015. I take a day off here and there. They are closed on Christmas and New Year. But mostly, I go there every single day and swim a mile. I do not think of it as exercise. I think of it more as a way to kick start my day. A cleansing way to get going. Sometimes at night before I go to bed, I literally get a little joy kick out of knowing that in the morning I can go back to the pool.

I try to walk a little every day but I do hate it along with all other forms of exercise. Good think there is swimming!!
Collapse