I am burying shit right and left around here today.

First my Goggles bit it. They started kind of leaking a week or so ago. I bought new to have ready for their demise. Today, they indicated their demise was imminent. RIP in the locker room waste can, goggles. You swam good. Hello, new goggles. You ready to take the mound in the morning?

Nexus 7's. I bought one the day they announced it. I loved it. I love the snappy. I love the size. Last year, I scored another one, used. Mistake but hey. Both have been limping along recently with operating system issues - neither have enough hardware to keep up with the software and keeping the software rolled back enough is a lot of work. Plus, both have had charging port issues for a while and now I can't even get one of them charged enough to wipe clean. I am declaring them both dead. One will go to Goodwill and I'm not sure what to do with the other, I may just keep trying to get it charged. I'd like to wipe it before it leaves my hand and I'd rather not do that with a hammer.

EDIT: persistence! I jury rigged a USB plug so that it did not wiggle in the port and the tablet is now, finally charging. So I can erase it from Android Device Manager. WHEW! Goodwill will be happy.

I found a Lenovo Tab 4 which is only a little bigger than my Nexus 7's. Not used. On Amazon. $100. I bought it. I doubt Google will be announcing any small tablets at their October 9th event but I'm going to wait and see. This will see me through til then anyway.

I was a fan of the Amazon tablets for a while and still use two in the sewing room. One to watch podcasts while I sew and the other to look up info. But they are pretty useless for anything else. And kind of annoying to use.

So that tablet nonsense just ate up my morning so far. I was kind of killing time anyway until 9 when Goodwill opened but now it's nearly 10. I'm an overachiever.

I have all the bags I filled yesterday in my hallway and I want them gone so that's what's up next.

I need to make an appointment with the eye doctor for my annual checkup but I really hate those checkups so I keep putting it off. My lung doctor and I, however, may be getting together pretty soon. I've been having some not very comforting lung issues. Coughing jags and out-of-breathness. It started about the time the weather got cooler which is, I'm sure, a massive coincidence but interesting. It's not bad, just annoying and, of course, since COPD is degenerative, this could just be regular expected progression. I'd rather it be a passing minor infection, though, if I'm give a vote. My annual visit with Dr. Lung is in January but I will not hesitate to move it up on the calendar if this whateveritis gets worse.

Time now to get off my giant ass and get going. 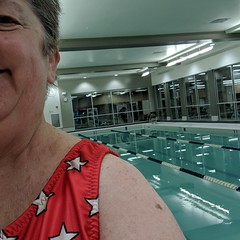 I'm always hearing about everyone's "love language". I cannot relate. But, today the phrase came to mind when I was looking for a way to express my feelings.

I made my Goodwill run and then it was 11:30. I was near Uwajimaya so I thought I'd pop in and get some poke for lunch. But, for some odd reason, Popeye's popped into my head and all I could think about was fried chicken. I was, at that moment 2 blocks from Uwajimaya and 20 minutes from Popeye's.

Ok, if there's a parking spot open, I'll do Uwajimaya's. There was one open and I went right past it and on to Popeye's. The tongue's gotta have what the tongue wants.

And the certain knowledge that Popeye's aromatic fried chicken sitting in the seat next to me while I drive the 20 minutes home is my torture language. OMG. I could have eaten it there. But, Popeye's isn't exactly comfortable dining. I could have pulled over in a nice park and had a picnic but I didn't have anything to drink and bugs outside the car or a mess inside. So I just endured the torture and drove home.

I ate 2 legs and a thigh and a biscuit with my Diet Dr Pepper. You can come get me now, Jesus, if you want.
Collapse