I started watching Forever (Amazon Prime) this weekend. I am not a fan of Maya Rudolph and am pretty meh on Fred Armisen so I'm not entirely sure why I even started it. The first episode is very engaging. The presentation is actually pretty fascinating. Then the second episode sets the hook. The episodes are 30 minutes-ish and there are only 8 of them. I have 2 left. I'm likely going to have to watch both today. I'm now obsessed.

It's a good thing it's only 8 episodes. I just don't have time for more. I still have two more weeks of baseball and regular television starts again next week. I still haven't gotten through my Acorn To Watch list. Or the To Watch lists on Netflix or Amazon. Just too much to watch and not enough time. And I'm retired with ONLY time. I don't know how real people even do it.

I was going to do laundry today but then I punched the clothes down into the hamper and voila! I've got at least another day or two before the dirty clothes hamper screams for mercy.

I spent most of my growing up in North Carolina. Then I lived there again a couple of times in a couple of different places and in South Carolina. So all this Florence news is about places I've lived in, visited, went to summer camp in, heard about on TV weather reports... All very familiar until this morning. Finally I saw a tweet about a town I'd never heard of. Bolivia, NC - it's down near Wilmington. According to Wikipedia, the population in 2016 was 152 so I guess that's why I've never heard of it.

Today I'm wearing the last of the test shirts I made a few weeks ago. This was another successful test - this time of on the shoulder sleeves. The stripe fabric is kind of lux but I only had enough for sleeves. The shirt fabric is stuff I picked up at Goodwill for cheap. I don't love it but I like it better with the stripe. I love mixing stuff that is not supposed to be mixed together. Also that little square decoration on the neck? That's to cover the evidence of my putting the neck band on backwards. Lemons/lemonade right there. 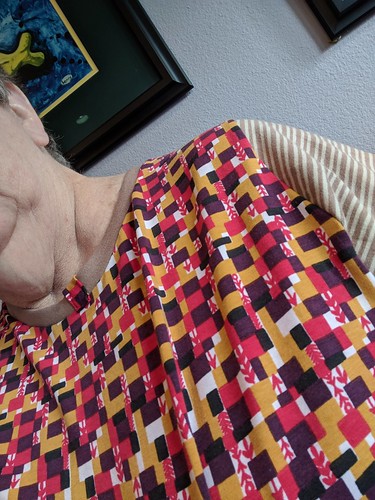 I need a massage. Specifically a neck and shoulder massage. But, I hate massage places and I'm not that wild about massage therapists. The last massage I got was about 6 years ago and was so horrible that I think I have massage PTSD. But my neck, in particular, could use some love.

I think I'm going to finish at least one pair of pants in the sewing room before I do the next episode of Forever. But, first, I have a window shade that won't go up. I guess I'll fix it before I do anything else. 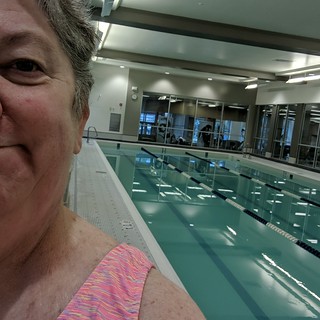