The pool was full this morning but mostly with people I'd never seen before. I had my half of a lane so it was not a problem and kind of fun to see new people. After I swim I shower and after I shower, I always try to get body lotion on my back. If I don't, long about mid afternoon, it starts itching and does not let up. Especially in fall and winter.

I keep a pancake turner in my swim bag so I can reach all the places on my back. I usually just slap the lotion on and try to get it into the skin enough so it does not much up my clothes. Today when I was slapping it on my back, a nice 40/50ish woman was coming in from her yoga class and asked "would you like me to spread the lotion around on your back?" I said, sure. It was luxurious. She used the pancake turner and got my entire back. What a very kind thing for someone to do. It was a rare treat for me!

So shopping there is an adventure. It is likely that what is on the shelves today will never ever be there again. It used to be that the closest one to me was not that close. So I'd go and buy something I'd never seen before to try it, discover it was fabulous, and then have to go all the way back to get more right away before it was gone. The, a couple of years ago, they opened one nearly walking distance from here. It's always an adventure.

Yesterday I picked up a can of corn beef hash. I had not had any of that in forever. I had it for breakfast this morning. It was good. Not great. I don't need any more for a while but it was fun to relive that taste memory. I also got some frozen chicken thighs. I need to thaw one or two of those out today and try them. They were really cheap so if they are fine/good, I want to go back and get more.

Oh and I finally did figure out how to change the image on my Discover card. They still offer it! You can't upload your own but they have lots of nice ones to pick from. I picked daffodils. 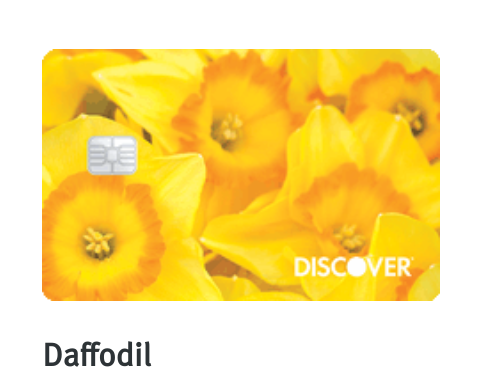 While I was swimming, I thought up stuff I could do today, places I could go. Now that I'm home and breakfasted and ready, I have zero interest in going anywhere. There's no rule that says I have to go somewhere so maybe I just won't. I have some pants cut out and ready to assemble in the sewing room so maybe I'll to that instead of going somewhere. 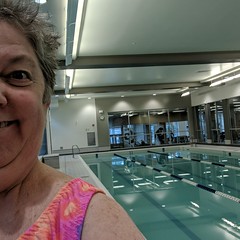 Just after dinner I noticed that I had not yet hit my tracker's goal today! So, I took the garbage down to the dumpster and then walked around the garage. It only took two circuits to trigger the GOAL!!!! icon on the watch. So whew.

When I got upstairs, I decided that it was time to put the air conditioner away for the winter. There was a little water collected in it which I drained. I wiped down all four filters and then dismantled the hose and door vent. Then I tucked it into its nook behind the curtain. See you next May or June! You did a fabulous job this Summer. Thank you so much.

I got my first air conditioner on wheels in 2002* and started tracking the dates that I set it up and put it away each year. After all these years, toss in global warming and it's pretty easy to guess accurately when the key dates will be.

meowmensteen's comment send me back to 2002 where I noted that, in fact, my first wheeled air conditioner was procured in 1999. 2002 was when I started this journal. Record now set straight :)