We finally have rain! Real rain. Not the kind that is prediction only. This is wet and glorious. It's also the first day since last Spring that my feet are cold. As in I should get up and go find some socks. It's lovely.

I think I'll take advantage of it and go out a little later. Probably just to Grocery Outlet. But, at least that will be better than getting into a hot car and driving in the glaring sun. I might even wear a long sleeved shirt.

Earlier this week, I had a run in with Evernote that ended up with my having to replace my Capital One Visa. While I was crawling over the Capital One site looking for contact info. I ended up finally finding a phone number via Google. Capital One is not interested in talking to me via chat, email or phone which is interesting. However, in fairness, and, as it turns out, I didn't really need to talk to them anyway. Their systems are pretty good and automated.

But while I was poking around, I found a 'change the image on your card' link. Oh yeah? Years ago Discover offered this (they no longer do). I had the coolest Discover card for a while. But now, Capital One lets you upload your own photo. It's very restrictive - you upload and then they have to approve. I uploaded the cartoon of me that is my current LJ user pic and it was rejected. But, I figured out that it was rejected because of the Mariners logo. So I erased that and retried.

Meanwhile I also have a Capital One Savor card. This is a new card they recently started - 4% back on food and entertainment. It's fatal flaw is that it has this lovely wood grained graphic on it that totally blends in with most restaurant tables in the Seattle area. You put the card down and it disappears - no waiter can even see that you are trying to pay. It's hilarious. And annoying. So I was thrilled to be able to change that image! I used the same cartoon of me but the one in the green outfit.

Clearly I have too much time on my hands. But, also, will have the coolest credit cards. I can't wait to get them.

I had a couple of sewing disasters yesterday. Not really disasters since I was working on a toile - a practise piece to get the one pattern right. But, still, putting a zipper in upside down is just stupid. And other issues. I really want to finish this piece I'm working on but I hate it so much. I think today is the day that it gets done. I need to move on with my life, there isn't that much of it left that I can just waste it!

Depending on what's available at Grocery Outlet, I may make an Instant Pot meatloaf today. It's been on my list of things to do for a while and I think today is the day.

But first I need to get dressed and make up my bed. 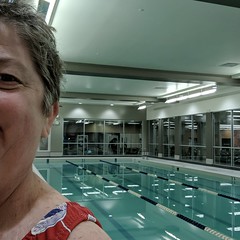 The not so bright me is in charge today. I wanted to make a meatloaf. Did I think about what I need to make one? Did I look in the kitchen to make sure what I needed was on hand? Did I make a list for the store? Did I get everything I needed to make meatloaf.

No. Copy/paste behind every ? above.

Oh and my sewing project that I had had to fix so many issues on? Failed totally after all. Well not totally. I now know for absolutely certain how to tweak the pattern so that it will be perfect. And I saved the expensive zipper. And I can use a lot of the fabric for trim and stuff on other projects so not a tragic failure at all.

And I did manage a meatloaf. In fact. I totally misjudged the wet ingredients and made too much so compensating for that led to two meatloaves. One for the Instant Pot for dinner tonight. 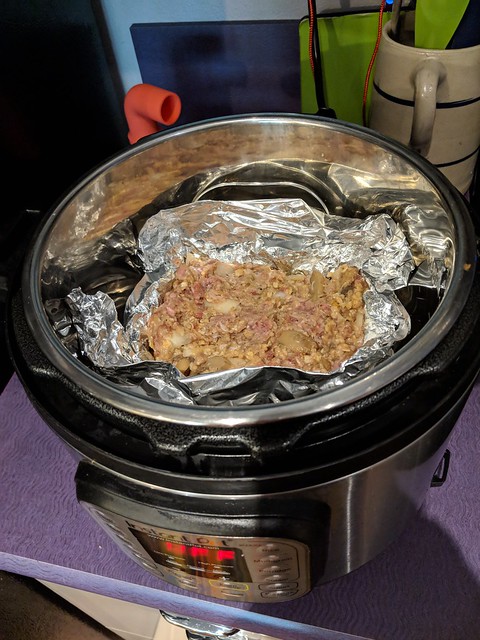 And one for the freezer. If it turns out to be good, I'll have two great dinners and some excellent sandwiches. If it's a fail, I will have two crappy meatloaves. Go me.

Two Wave guys came by to pick up my modem this morning. They were perfectly delightful. And I got my first bill on the new system. It turns out to be $30 less than I was expecting and once I turn off the extended channels in two weeks, it will be $90 less than I was paying for tv and internet last month. And the speed is such fun.

I just saw a tweet from the retirement place where my Mom and Dad lived before they died in Charleston, SC. They were reporting in from their evacuation homes. Apparently they have some folks in Lexington (I'm assuming NC since Lexington, SC is still almost in the pathy) and Hendersonville. Both are about 4 hours from Charleston by car. Bishop Gadsden (the retirement place) is home to a wide variety of bodies. They have independent livers and assisted livers and nursing patients all the way down to vegetative seniors. Probably 450-500 in total. I cannot imagine how in the world they got all those people moved. The tweet said they are expecting to know something on Saturday about when they can go back.

The rain stopped early on and the coolness of the day kind of disintegrated but I still haven't changed into a short sleeved shirt. I'm a rebel.

I give it a 5, maybe a 6. That number may increase depending on the sandwich situation.

It was not dense enough - almost but not quite - and not flavorful enough. Both of which I know how to fix and can even fix the one I put in the freezer so that's excellent.

Cooking it in the Instant Pot was excellent So I will be fixing it for the next time for sure.

The Spotify for a year via Costco trick worked. My account now says it will renew 9/17/2019. Very cool.
Collapse