I should have added this to yesterday's entry about skydiving and balloon riding. I have bungee jumped. In 1995. In New Zealand. Queenstown. At AJ Hackett's - where bungee jumping started. I was with my friend, John who refused to do it. It was very cool and literally breathtaking. I was too cheap to buy the video of it but I do still have the t-shirt - the part with the logo on it anyway.

After 3 days of lots of pool action, today I was alone - at least for the first 45 minutes. It was weird. But fine.

Today's big deal is cable/internet. I live in a building that has actual choice for both internet and cable TV. We can get services from two different cable companies or the phone company. It's really quite cool. For years I bought my cable TV from the companies that were eventually gobbled up by Comcast. And as soon as they offered it, I bought broadband internet from them, too. Then we got fiber optics and Wave Broadband. Wave offers cable TV, cable internet and fiber internet.

At the time Wave came in, Comcast was being particularly problematic for internet in both their customer service and their actual service. So I switched to Wave. That was about 4 years ago.

My internet is 100 MPS and $60 a month. That's what it was when I got it and what it is now - both speed and price. And it's the fastest they offer in this building.

The cable TV is also from Wave and it comes in over coax (the internet comes in over the old telephone line). During baseball season it's $140 a month. Outside of baseball season I can remove most channels (leaving me with mostly just the major networks and not much else) for about $80. I can get the rest from my brother's family plan YouTubeTV.

The internet lately has not been fast or steady enough for me. And I've considered going back to Comcast. But, it's complicated. I'm pretty sure that Comcast internet is all via coax. So if I switch internet, I will have to also switch TV. I'm not sure I'm ready to make that leap.

In a freaky coincidence, Comcast is coming here to this building tonight and holding a sales reception. While they are offering Swag and Snacks, I'm guessing they will also include specially priced deals.

So. I think today, I'll be calling Wave to make sure they can't do me better on speed. And find out exactly what my post baseball season TV options are. In other words, getting my digital ducks in a row and ready for the Comcast onslaught.

But before that onslaught will be the 1st Thursday craft fair. It's really more of a fair-lette up in the park 3 blocks from here. There are usually about 20 or so tables of crafty stuff set out and it starts at noon. Today's mission is baked goods. Last month, I was up there and bought some treats from this one table. I got home and, turns out, those treats were spectacular! And I no details about the maker. All I had was a vague memory of her sign saying something about being a British bakery. I'm so hoping she's back there today so I can get more goodies but, more importantly, I can nail down who she is and where she sells. Next month is the last of the fairs for the year so I need a source!

A couple of weeks ago, I got a new water teeth flosser. I had been using one powered by AA batteries that is really made for travel. I liked that I didn't have to plug it in and that it had a small counter footprint but it just did not have enough umph. My new one is the traditional kind you plug in and it has umph to spare. And I love it. I keep it on 10 and it's like power washing my teeth. They feel wonderful after one of those power washings. It's also knocking off the plaque that built up during the travel flosser days.

I'm not sure about the rest of the day. I know it's going to start with changing the sheets on the bed and running a load of laundry to wash the ones on their now. But, beyond that, I'm not committed to anything. Maybe a Grocery Outlet trip. Maybe not. 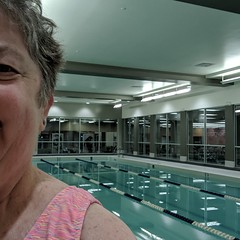 I called my current internet/tv provider to find out what, if anything, they can do speedwise or pricewise to give me a better deal before I talk to their competitor.

I called 32:36 ago. They warned me that they were experiencing high call volumes with waits of sometimes 15 minutes at the beginning of the call. I'm getting more and more not happy.

Ok. So here's a twist. I finally got Katie on the line at the 38 minute mark. She was bright and easy to understand and no bullshit and no blowing smoke up my skirt. I told her I wanted faster internet and cheaper TV. We chatted options.

Basically I'd have to give up my fiber and go with cable internet which means I'd need a modem. I can get a GIG of unlimited data for $99 a month with a special deal of $79 a month for a year (I'm currently paying $60 for 100 MPS). $60 installation which she might be able to waive. My TV will go down from $140 to $75 next month. There are a couple of other conveniences included.

We hung up and I figured I'd take this info to Comcast and see what they've got. And I will BUT THEN...

Katie sent me an email!! With a couple of other options and an invitation to just pop her an email whenever I was ready or if I had questions. I cannot imagine Comcast doing that. Plus, now I don't have to face that 38 minute wait on hold again. Way to sucker me in, Katie!

The downside of the deal is that I'd be giving up bullet proof internet for the unknown in terms of uninterrupted service. Best I can tell it's good. Reddit customers seem happy. The downtime websites sound like outages are rare.

So the plan is... I'm going to go see what Comcast has. If they can give me GIG internet speed with more/better channels for less than $140 a month this could be a hard decision but I'm guessing their price is more so not a hard decision at all.

I went up to the park to find the British baker and she wasn't there!!! I got some kind of over priced fancy gelato that was ok. Bummer.

Ha! I forgot to post this so I guess I'll just add the latest. The Comcast thing was very Comcastic. She said I could get a GIG of internet and all the TV channels I wanted ("sorry, I don't have a list") and the equipment (which I told her I did not need) including a DVR (which I had told her twice that I did not need) for $70 - "plus taxes and fees of course". Why don't I trust what you are saying?

You know what? I'm team Katie. Also, your snacks are lame and the swag doesn't even tempt me and I love swag. Thanks for coming.

Because of the drip downstairs, they came to look at my terrace and the hole in my ceiling today. Turns out there's no water up here. Still.

Tonight I get a note from Sandy. She says they are waiting to fix me until they have fixed the terrace above me which is far more complicated. However, if I'm willing to take the risk that the repairs above won't hurt the repairs to my unit, they will go ahead and repair my ceiling.

WTF???? Now that the entire Summer - terrace using season - has ended, NOW you want to fix it??? And then maybe have to fix the fix??? And lay it on me "if you are willing to take the risk".

I replied that as long as my unit was completely repaired by March of 2019, they should make said repairs as financially responsible to the association as possible. And, oh by the way, you keep NOT mentioning the interior damage which I also expect to be repaired.

This is the president of the HOA that I'm having these stupid conversations with. I'm pretty sure she will not be the president after December of this year. So I need to make sure I have everything in writing with a distinct paper trail.
Collapse