After my swim, I dipped into Trader Joe's which is just across the street. I remembered I had a bagel and cream cheese and capers at home so I got lox and an onion and a tomato. This was just perfectly delicious. 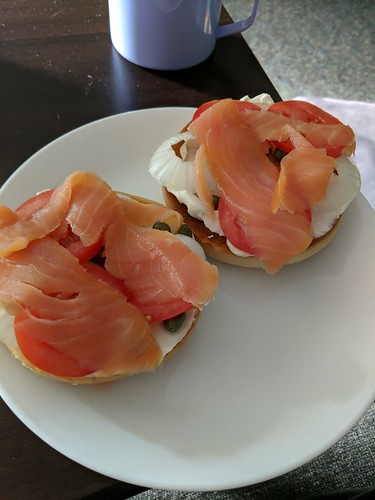 And it was a great way to celebrate this!!! 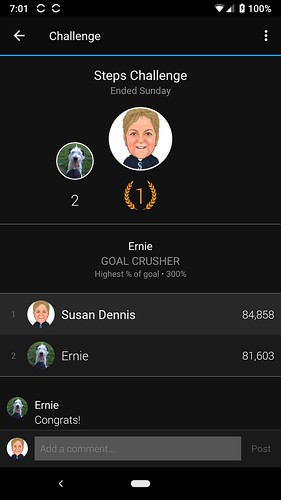 I will be glad to get back to my early morning swims with swimmers who are there to swim. I'm kind of over a 3 day weekend of walkers, and talkers, and people who don't understand or care to observe lane etiquette. They all have a right to use the pool and it's great that they do. Without them, the gym might figure it didn't even need the pool and close it down. Swimming at 5 in the morning means zero traffic to deal with on the road or in the pool!

I have sewing to do today. I started making this top to try out a pattern and now I love the top and thought of another thing to make it even better so I'm ready to get back to it.

The game isn't until 6 tonight so I have all day to piddle and watch another episode or two of Paranoid (Netflix). 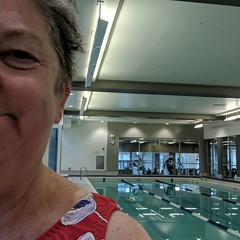 I consider myself rather technically adept. And yet, I can get tangled up so quickly in the most simple issue. It cracks me up.

Tonight's adventure was texting. Because Google has for too long not had their texting shit together, I've had to use Hangouts which is basically a not very good facetime application for texts. The only saving grace was that Hangouts is available to me on the phone, on every tablet and on any computer - which makes it ohhh so handy. But it's a stupid app for texting.

Now Google has made their text app (Messages) into a viable texting app that is also usable from everywhere including any computer. I got it all set up this afternoon.

It took me more than a beat to figure out I needed to tell Google I was switching. And that setting was not easy to find. But, it didn't work. I sent a text via Messages and the response would come back via Hangouts. I took a break for dinner and conjured. And then came back and still, no joy.

Finally I figured out that I had to specifically tell Hangouts that we were getting a divorce. Hangouts, turns out, does not respond to ghosting. I think I have it now. But I should have had it in 5 mins instead of several hours.

My Mom had this phrase she used all the time 'you're so bright we almost called you son'. It translates to Doh.
Collapse