I have three days now of late swimming. Instead of its still being too early for everyone else, when I finish on these three days stores are open and people are about. Today I went and had breakfast at a place I had not been to in a while, it was good. Tomorrow I might just go to the Farmers Market they have near the pool on Sundays. Monday is still open for discussion.

I'm not very inspired to do much of anything else today. While I was swimming I dreamed up my next sewing project and I have to fix a minor issue with the new bag but nothing has to be done today. Zoey is curled up here next to my leg further re enforcing the lack of motivation.

It's cool enough to have the door open. In fact, right now, my indoor/outdoor thermometer says the outside temp and inside temp are nearly in sync. Outside is 72.7 and inside is 73.0. There's a soccer game this afternoon and with the door open I get all the sounds from the pre game chanting march and the pre game band march both of which go down the street below on their way to the stadium. It's a real plus of this condo.

I think maybe this afternoon will be a Nextflix afternoon. I have my crochet project and a nice full watch list.

Ernie has yet to catch up. Surely he'll over take me today. 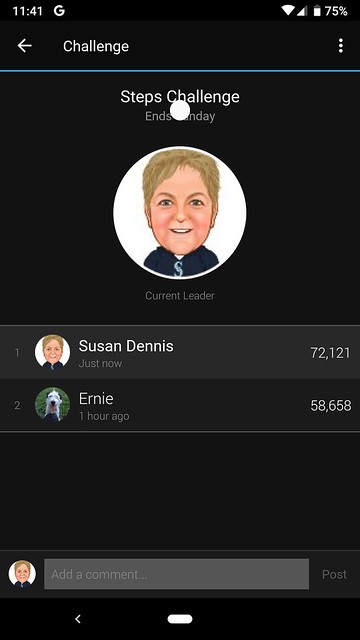 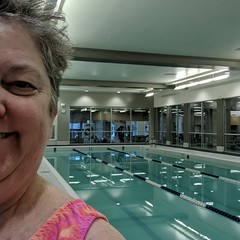 It does look like Ernie's going to carry this week after letting me be ahead all week. He's only 3,000 steps behind me right now. One more day. Oh Ernie. Such fun. Thank you.

I did play right into his hands today. I moved very little all day.

I found and started a new (to me) series on Netflix - Paranoid. So far, I'm enjoying.

I did spend a fair amount of time altering a pattern that I want to try out. I have some test fabric to cut it out of tonight during the ballgame.