*My parents lived in NYC during most of my college years. I was at college so I didn't technically live there but enjoyed some fabulous school holiday visits.

The weather people are promising a double whammy today. 90 degrees and thick smoke. Nice. I had the car windows up and the air conditioning on to and from the pool and still felt the crappy air. Or it was my imagination. Either way, I'll be one tickled tiger when today is over. Those same weather people say tomorrow will be 20 degrees cooler and the smoke will be on the way to gone.

ljtourist my Diamond Club Mariner ticket for today's game. It's an afternoon game and I knew back when I first saw the schedule that I was not going to love sitting in the hot sun on an August afternoon. Frank is perfectly fine with hot sun and was happy to fill the seat. But, now I'm feeling badly for his lungs. I hope the game is good. I'll be watching on the TV.

Today's project is a tissue box cover that is a sofa. I keep a box of tissues out here next to my chair but it's ugly. I went to Etsy yesterday to find a nice cover for it and the best ones I found were sofas made from fabric. I have fabric. Er tons of it and way better stuff than the Etsy ones and so... There will be pix.

My crochet is still getting more gorgeouser and gorgeouser every hour. 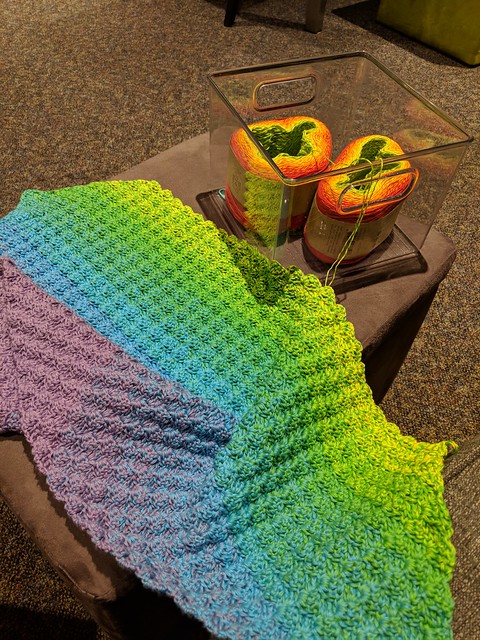 I was thinking sleeveless sweater. Now I'm thinking maybe sleeveless cardigan. This is the back so I have a bit to decide. Also I was worried about having enough of this yarn but I think I'll be fine. I have another 2 cakes. That ought to be enough to work.

I have a nephew - my brother's youngest (38) - who's a rabid sports fan. He lives in Des Moines, Iowa but was raised in Boston and if it involves at least 2 guys and a ball in New England, he's all over it. Not as a participant but as a rabid observer. He's been a Red Sox fan way longer than I've been a Mariner fan. His mother has at least one Red Sox tattoo.

He and his wife love to travel around and see cool stuff. They have no children or pets and so they just go. Last Spring we exchanged texts about their coming here to visit. We joked about March - my 70th birthday and what kind of cake they would have to provide if they were here. His birthday is the first week in April so we joked about a joint party. I assumed it was just text talk. Turns out not.

I got a text from him this morning that the MLB 2019 schedule is out and Boston is here for the opening series! FATE!! he says. So after some back and forth and a note to my Mariner sales guy (any chance in hell of getting tickets to this series??? SURE!) we nailed it down. The Season opener is on my actual 70th birthday. We might not go to that one but for sure one, or more, of the other three games.

And, if that's not enough, now my brother says now he will come, too! This is going to be so cool. I'm pretty excited.

Just got a text from Frank (LJTourist) that he's at the game and it's hot and it's smoky. I'm so glad. He'll enjoy the heck out of it and I'd be sweaty and whiny and coughing and sorry I went. This is way better.

I made the sofa. I think this is just a test. It looks fine but it's got issues. The next one will be perfect. Even this one, with its imperfections is way cuter than the plain box. 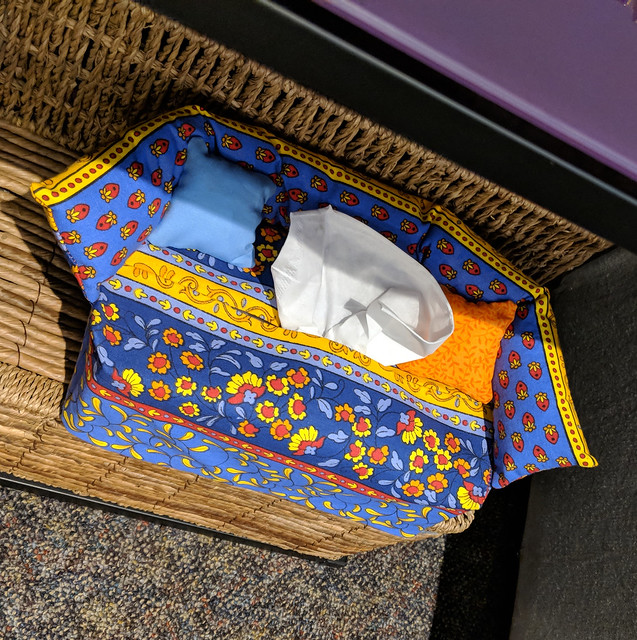