The LA Dodgers play in the other league so we rarely ever play against them. And half those times are at their house. So having them here in Seattle only happens every decade or so. And, turns out, there are a buttload of Dodgers fans in Seattle. And they have the grace and couth and curtesy on par with the rude Yankee fans.

The first game was Friday night. They beat us 11-1. So they piled into the stadium last night huge in numbers and high on hubris. They took the lead with 1 run in the 1st and the fans took that s a sign to just ratchet up the obnoxious.

We came up in the bottom of the first and tied it. Then, with 2 men on base, our 3rd baseman (Kyle Seager) - whose brother plays for the Dodgers and was there with is family - they were on the field pregame - but is out for the season with injury - hit a homerun. The relief and joy of the nearly outnumbered Mariner fans was collective, instant and wild.

Then, in the bottom of the 10th, we got one guy on base, then another, then a third! We had one out. The same guy - Kyle Seager - was at the plate. The drama was high. The tension was thick.

Their pitcher starts to pitch and then - totally inexplicably in the dumbest move a pitcher can make - steps off the pitching mound. This is called a balk and the penalty is that all runners move up a base. So... our guy at third just moved on up, crossed home plate and we won the game ... every one of us was stunned. So it was about 4 beats before the Marner fans jubilation drowned out the Doger fans with their mix of groans and WTF??? It was spectacular in about 56 different ways.

Plus there was a lot more drama during the game, one of the Dodger outfielders got pissed when he missed a catch and threw his glove like a 6 year old. Kyle Seager, the game's hero, also fucked up an easy double play mid game. Our unsung hero of a center fielder saved three different innings with amazing catches. It was just one thing after another.

I got home and immediately watched the final inning over again and then could not get to sleep for 30 minutes after I turned out the light.

They play the Dodgers again today. I kind of wish the game would get rained out and we could live on last night's game a bit longer but we aren't going to see any rain for a month plus, the stadium would just close the roof. So... new game today. I need more coffee.

At 2:09, this clip shows that balk. Wild. Grrrr MLB's heavy hand of NO SHARING, hits again. But at least they give you a link to it - at the right spot - on YouTube

Some favorite TV shows: Most lawyer shows, most doctor shows, most police procedurals, a whole lot of Acorn programming

Do you enjoy seeing holiday decor early in the holiday season?: Honestly, I do not care one way or the other

Content found in your LJ: It's my online daily journal. I write as if it is an old timey daily diary.

How often do you update/comment? I write every day. I comment when I have something valuable to contribute that is not negative.

My ample retired ass spends a good deal of time in the new chair I got from Costco last month. And it's a great chair for sitting (as opposed to one that is better to look at than sit in/on). But one of the outstanding features turns out to be separate cushions. Both the seat and the back cushions are completely removable and reversible. So every Sunday now I remove both and turn them around. It makes my comfortable chair even more comfortable.

Not so comfortable is this stupid baseball game. The Dodgers leave town after the 9th inning and, honestly, it can't come soon enough for me.

The air looks crappy again but, Breezometer says it's really not that bad to breathe. I'm keeping the door closed anyway. I don't want to take any lung chances that aren't necessary. At least I can keep the a/c on low and still be comfortable. I'd be so happy if all of the hot weather was behind us. The current 14 day extended forecast says this coming Wednesday will be hot and then, after that, it gets reasonable and stays that way. I'd love that so much. 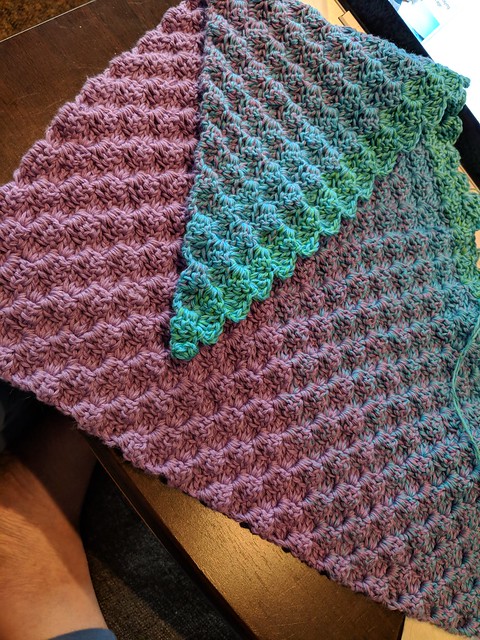 I'm enjoying my latest yarn project. I think it's going to be a sleeveless sweater. This yarn was expensive but I love the colors and the way it morphs from one color to another.

This game is getting worse. I think I'll watch something else and come back and finish this via fast forward.