I was sitting here happily watching the Mariners beat Houston for the fourth game in a row, when I got a text from

ljtourist asking if I wanted to meet for coffee at 4. Hell yes! I had not seen him in way too long and really needed a catchup. So we met at a nearby coffee shop. And, can I just say how nice it is to have coffee shops for getting together?

Back in the olden days, it was bars or parks or often not anything. NYC had Choc Full o' Nuts but it was more of a sandwich/cafe kind of thing and you didn't really 'meet there for coffee'. Central Perk (ala Friends) was certainly not the first but an early incantation of what the coffee shop would become. Kind of hard to imagine a world without Starbucks on every corner now but it really wasn't always so.

Plus, we have some excellent non-Starbuckian options in Seattle and Frank and I met at one and got all caught up. He said that he was on his way to get some Sunday night fried chicken in Ballard. He allowed as how he was going to invite me until he read here that due to the soccer crowds for the game at 7 across the street, I was not planning on going anywhere. But, I had written that before I understood that fried chicken was in the mix. Fried chicken vs. stuck in traffic... Fried chicken for the win!!

It was a great treat. The weather was so perfect for being out and a about and the chicken was good and there are two pieces of it in my fridge right now for lunch and/or dinner. Yum. Plus, even though, I was in my car driving back home at prime rush to the game hour (6 pm), I managed to maneuver my way through the closed streets to my garage door with, really, minimal interruption. This is actually pretty good to know that up until at least an hour before game time, I can still get through.

Last night, twice, Zoey woke me up with her Feed Me song. One time she even started knocking shit off the bed side table. She really never does this. I did not get up to feed her and did not feed her before I went to the pool. When I got home from the pool she was beyond adamant. She had a few dry kibble left so I filled that dish up and then dished out some of the stuff she usually turns her nose up at. She gobbled it up so fast that I knew I was going to be cleaning up kitty puke. I mean she ate every last bit. The dish looks like there was never any food in it. But, that was what she wanted. She didn't even come to me for more. No puke. She's now sleeping it off. Weird.

So yesterday, I went to Zappos to do some shoe shopping. I checked for new Crocs and then went to the Crocs website and in between, Amazon popped up with some Crocs options and before I knew it, I was looking at something called Amazon Prime Wardrobe. You pick out 3-8 items. They send them to you - no charge. You pick what you want and then send the rest back with free shipping both ways. Well, heck. I'm down with that.

Zappos does virtually the same thing and with way faster shipping but you actually pay and then they reimburse you. And he shoes are more expensive. But the service is better. (Amazon actually owns Zappos.)

But, these are winter shoes I'm after so no hurry. So I ordered 5 pair. I'm thinking it's likely I won't like/keep any of them and will go order from Zappos after all. But, interesting to try. I do admire how Amazon keeps coming up with more ways to take my money.

His Summer vacation is over and my news guy is back. Gabe Fleisher is a teenager who publishes a daily newsletter recapping politics in a most digestible way. He's amazing. And I've grown to depend on his emails every morning. It does not take long (like maybe a day and a half) to totally forget this is just one kid in his bedroom pumping out this spot on stuff. You do remember, however, when he tells you that his newsletters will be suspended because it's summer and he's going to camp. But, today's he's back. Yeah!! I have really missed him.

I'm not sure I remember a LiveJournal without

rsc. I started my journal and also following other LiveJournals in 2002 and I'm pretty sure they were among the first folks I found back then. This morning, John posted the most amazing photo of the two of them. I'm stealing it for my own journal because I love it so much. 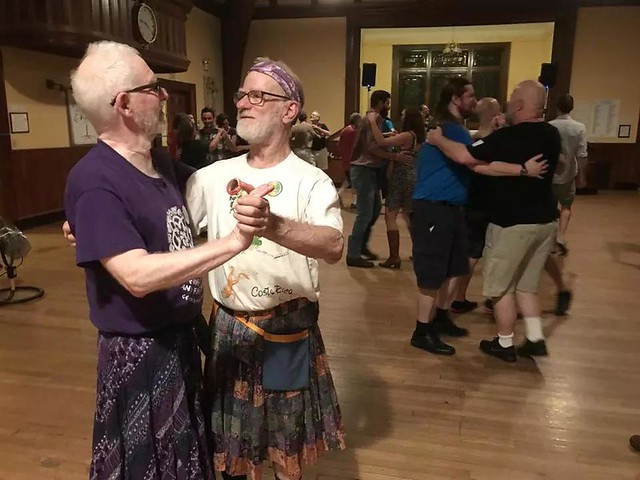 It was taken by Amelia Nierenberg of the Boston Globe. She also wrote this great article about their dances.

I set up a spreadsheet last February that is automagically fed every day by my tracker. I can see the spreadsheet. It's on my Google drive. It is up to date and accurately reflects the data my tracker tracks. BUT... I cannot remember how I did it or reverse engineer it. Garmin does not work with IFTTT which is the logical choice. In fact, I cannot google myself to any solution that sucks the garmin data into anything automagically. And, yet, there it is. I'm stymied.

But, I'm also still in my swim cover up and it's already 9:30. I need to get off my ass and get this day started!

curiouswombat asked me about my first job. My very first job was babysitting. I did a lot of that. I was in demand. $1 an hour + pickup and delivery - you come get me and you bring me home. I was a good deal. But, then, we had had some of the best babysitters on the planet growing up so I had learned from the best.

But, my real W-2 first job was as a shop girl in a dress outlet. It was the Summer I was 16. The shop was located on the highway between Boone and Blowing Rock, North Carolina. It was really more of a tourist road side stop. My parents' friends, the Thalheimer's owned it - more specifically Mrs. Thalheimer. My job was to do whatever she wanted me to do. The shop only sold loose cotton dresses - back then called house dresses. They were kind of an upgraded robe - meant to be worn to do the housework in.

My brother often says he was born on 3rd base meaning he was born a straight white male into a family with more than the average privileges. I was behind him between 2nd and 3rd. (I had the same privilege, just no penis.) And we had no internet so I knew squat, really, about the rest of the country and the people who lived there.

Most of the people who stopped to shop were the kinds of people I had never ever seen before. Most of them were on a vacation road trip just looking. They were often rude and my way of dealing with that was to be rude right back. I was not an ideal shop girl. So I actually did spend a lot of my time in the back room taking dresses out of boxes and steaming the wrinkles out and putting on price tags. This was long before the EPA and the odors of the textile inks are embedded in my memory... deeply.

I was in the shop waiting on customers one day when this guy came in with a girl/woman and two small girl children. They walked in - no car - from the woods. They were black with dirt. The three females never spoke. The man, who had no teeth, communicated that his women each needed a new dress for the summer. They were wearing muddy purple velvet dresses. I, incorrectly assumed he wanted choices. He did not. He was three dresses. Now. And here was his money. Dirty wrinkled 1's and change covered the probably $25 that the three dresses cost. He sent the woman and girls into the dressing room and they came out wearing their dresses. They walked out the door into the woods and left their velvet clothes in the dressing room.

The whole incident was a shocker to me. I'd never seen anything like that. Memories even now, some 50+ years later are vivid.

I really came to hate the job. And it was the first time in my school life ever that I was grateful and happy to go back to school in September.

BUT, that little gig taught me a whole lot. I realized that Summer that, in fact, I could actually work and make money. Real money. A check that I could put in my bank account. It wasn't much. It wasn't nearly enough but it was money. I could do it. I sure didn't want to make money that way so I needed to figure out how to make money a better way. But the idea that I could do it. I didn't have to get married. I really actually could earn my own money. That was a biggie.

And the realization that I needed a degree to get to a better job to make that money is what got me through college.
Collapse