I feel like I have just fucked the week away. Part of it is the heat, I think. It's Thursday and I don't feel like I have anything to show for the week. But, what the hell do I expect? It's not like I'm trying to cure cancer or something. I'm an old, lazy, slacker with nothing to do but entertain herself and I have managed to do that.

There's nothing huge on the agenda for today either. Maybe laundry? Probably laundry. And some more Instant Pot Pasta tries. I've decided that I'm not as happy with yesterday's experiment as I was at first. So today I'm going to try a new method.

I might make a run to Grocery Outlet which is close by but I might not. The air outside is really uggy and that with the heat, not a good mix. And I don't really need anything. I've got plenty to eat in the house and even enough pasta to test with.

I do have a box of crochet squares that some guy who makes blankets for charity asked me for. I don't quite have enough yet to stuff the box full but I'm close. It would be fun to finish and that that box stuffed and off.

But, first I think I'll go get dressed, start the first laundry load and maybe do a second cup of coffee.

But, first we made new egg bites. These are just amazing. And I love them.

My intent was to put bacon bits in the bottom of the mold cups before I put in the goop but I forgot so they went on top. Turns out, doesn't matter.

I whisked the eggs, cream and cheese together and added salt and pepper. And then poured it onto the molds. I did not get it even. But, again, no biggie.

Into the pot. I used the rack and then stacked one on top of the other. Steam (not pressure) for 8 mins, Natural release for 7 mins. DONE!

I cooled them on the counter for a while then all but 4 in the freezer to firm up and then transferred them to the bag and back to the freezer where they'll stay until the four in the fridge are gone. English muffin + one or two of these beauties = BREAKFAST!! 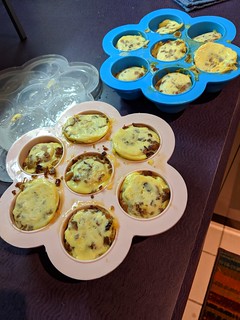 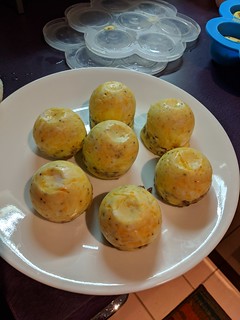 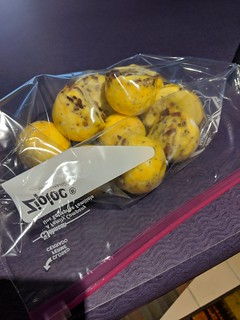 Then pasta.  I just barely covered the pasta with water BUT, apparently it was still too much. Less next time. 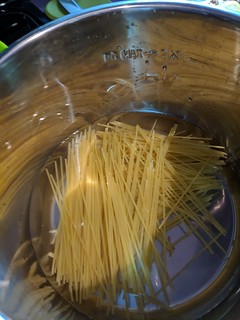 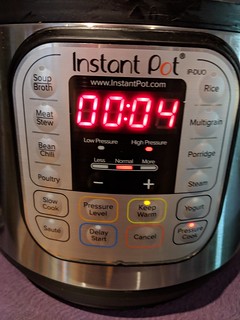 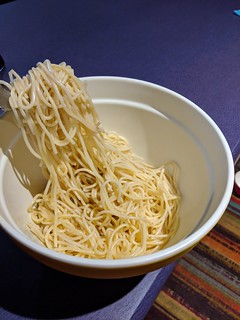 Between the start up time and the pressure time and the release time (even quick release takes at least a minute), you really don't save any time doing this. BUT it's way more set it and forget it (at least for a longer time and you can still forget it til the pot beeps). I did have to pour off a fair amount of water. More than I think I should. Plus, PIA cause no colander (I have one of those things that clips onto 'any pan' except not the instant pot pan.) Amazon is fixing the no colander situation.

I put a couple of drops of olive oil on the pasta and tossed it so it wouldn't stick to itself and left it too cool on the counter. Once it was cooled, I doused it with magic sauce and the result was yum. I don't have any crunch stuff like cukes, or carrots, or cabbage or scallions to make a fabulous cold noodle salad but just the spaghetti and sauce was good. And way better than yesterday's which, turns out, was too mushy. (And the left over that I had put in the fridge was just nothing but mush. Ugh.)

I really do like this Instant Pot. I'm glad I bit the bullet.

I spent more time in the kitchen today than probably the prior two weeks combined. By the time it was time for dinner, I wasn't all that hungry.

Raisin Bran, milk. No Instant Pot involvement at all. But, delicious!
Collapse