The Blue Jays do not have a great team this year and, yet, they are hammering the fuck out of the Mariners. Of course, the Mariners really helped last night by playing like they had booked luxury cruises in October so were not at all interested in any playoff games. And, to make it worse, the stadium was, indeed, full of Canadians who drowned out any Seattle fan reactions. The charm of their enthusiasm did not last nearly as long as their enthusiasm. It was just, over all, a very lousy game. I'm kind of glad that I don't have any more on my schedule for a while. Next one is August 18.

This morning's swim was lovely. I was a lot slower than usual and didn't care. Usually after my Saturday swim, I swing by one of the grocery stores there near the pool. I buy too much because I am hungry. Today I decided to try Amazon Fresh. The pick up is on the way home from the pool. It does not open until 10 and I'm usually out of the gym by 9:15 but today I was slow and then took my time and then used the gym wifi to do stuff on my phone and then drove to Fresh.

It's nice and cool out and their pickup location is covered so shaded. I got there 15 minutes early and discovered that they, too, have free wifi, so it was actually a lovely wait. I ordered less than I would have bought in the store so that's an upside.

I came home and had a couple of my new egg bites. From fridge, 90 secs in the micro. Perfect. They have a lovely, light, texture and are really quite tasty and certainly very easy. Tomorrow I'll try a couple that did the freezer part of the Tour To My Breakfast. 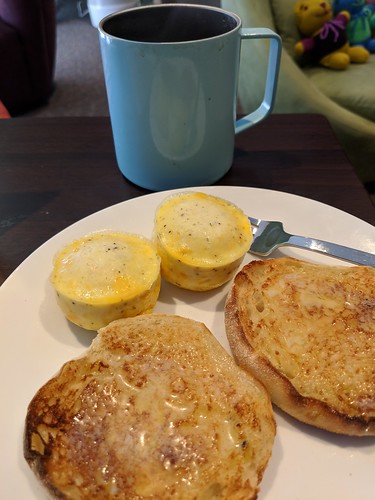 I did get more eggs at Amazon Fresh.

I don't really have any plans for today. It's nice enough to go walk outside and my lungs feel good but I'm still wary. So maybe, maybe not. I might scope out a next sewing project. I might sew up some pants - I have 3 pair cut out and ready for assembly but I'm I have plenty already made. I might just watch TV and do yarn work. OR listen to the S. King book which still has many hours of listening and is really a good one.

I think I'll start with putting away the groceries and see what happens from there.

badrobot68 asked me this. My life has not been full of pets but I've had a few... The first was Gretchen. Gretchen was an elderly obese dachshund who was brought into the family by my Mom. Gretchen was her first husband's dog. Her first husband was killed in World War II so my Mom went to law school and pawned poor Gretchen off on her parents. Her parents weren't natural pet lovers so as soon as Mom had a house/family/room for a dog, Gretchen came to us. By the time I was old enough to be aware, she'd gotten quite old and was basically a background dog. I don't even remember her dying. I'm guessing it was from old age.

After Gretchen, we went mostly petless for years. We got the obligatory chicks and ducks at Easter and most of them died. Quit judging. It was a different time. And they were dyed pink and green and blue. We had a kitten or two but they died young (or Mother gave them away). There was also the odd turtle and hamster. And lightening bugs.

Then we got Phonsie. As I remember we begged for a dog and Mother said she wasn't going to have dog hair all over the house. Then she discovered that poodles don't shed. So they got us a small poodle. We named him Alphonse and called him Phonsie. (This was YEARS before The Fonz.) He was a puppy and a standard poodle so he did not stay small long. He was a nice dog who loved to chase cars and drove Mom nuts.

At one point I was living in rural South Carolina and a friend gave me a puppy. Max. Max was a trip. Also a large dog. I had a small red sports car and whenever I would leave Max in the car, he's pop over to the driver's seat with his paws on the wheel. I'd come back to the car and there would be crowd surrounding the car enjoying the scene. This happened twice a month.

The other major Max memory was having him with me at our house in Blowing Rock (the mountains of North Carolina). Mom had this habit of, while she was preparing a meal, wiping her hands on her backside. Max followed her every step in the kitchen and after every wipe, he'd lick her ass. It was hilarious.

When I moved from the area, Max went to live on a friends' farm. He lived with cows and loved them for years and years.

When I was in my late 20's, a friend gave me a kitten for Christmas. I named her Christmas and she was a fine cat. She hated my soon to be husband's dog and loved the little boy next door so when I moved, she stayed with him. My husband's dog was an ok dog. I don't even remember his name.

I lived lots of places where pets were not allowed. Then I moved to Minnesota and got a farm cat from a woman at work. Bubba was a wonderful cat. Huge and a love. When you picked him up, he hugged your neck. He moved with me to California where he got to go outside every day. A stray kitten, named Jake, adopted us. The two of them were frenemies. They moved with me to Seattle. Bubba lived to the age of 18 and Jake, til he was 15.

Then there was Betty. I got her after Bubba died. She was a long haired beauty who loved to hide. Also to escape out the front door, go down the hall and shred the neighbors newspapers. She would hop onto the couch and her act of settling in was like a feather boa being lowered onto the upholstery. She was quite elegant.

While it's not nice to play favorites, my favorite cat ever was Pizza. All my cats had died and I wanted one but didn't know where to go so I called my vet to ask their advice and they said they had an adorable little cat - about a year old - who had been brought in after she had been run over by a car and was basically road pizza. She was not expected to live but they named her Pizza but now she was healed and a love but they couldn't keep her. So I went to get her and OMG. She was the best.

She was very tiny and very soft. In the mornings, just before the alarm would go off, she'd stand over my face and wave hers back and forth so that I got a whisker wake up. At night, she'd sleep curled up at my neck. I loved that cat.

And now we have Zoey. Zoey was the first cat ever adopted at very brand new Pet Smart store. I got her in March of 2013. They said she was about 4 years old. She's a good cat and plenty enough companionship so that while I threaten her now and again that if she doesn't straighten up, I'll go to the pound and knock her off her Only Cat Throne. But, honestly, I probably won't. I'm too lazy.
Collapse