I discovered nearly by accident this morning that I have an extra Mariners Diamond game. I knew I had one on Monday (tomorrow) but somehow a game on Friday (August 3) slipped right by me and my calendar both. And it's against Toronto! I love playing Toronto here. All of Canada comes down to the game and they are so nice and so fun and it just turns up all the baseball goodness to a marvelous volume.

So next week is a two game week. Whew. That's exhausting to think about. I need to rest up today.

I thought for sure my neck and shoulders and arms would be screaming in pain today after all the bending, squatting, lifting, pushing, pulling I did yesterday but not so bad at all. My lower back is a little twitchy but not fatally and none of it bothered me while I was swimming. 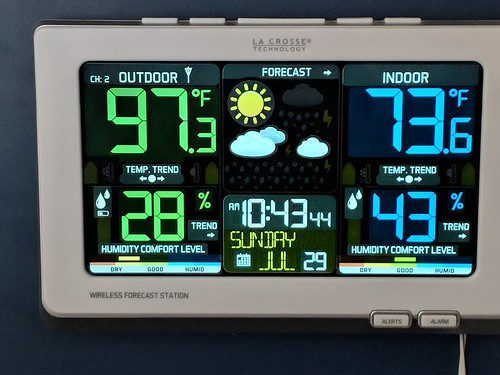 This is a little misleading in that the out door sensor is, right now, sitting in direct sunlight but... if you were up here where there is at least a breeze and you were sitting next to that sensor on my terrace you'd be baking... Me? I'm inside where it's lovely and cool, thankyouverymuch. At 10:47 in the morning. I don't want to even thing about what it's going to be like out there this afternoon.

I'll be inside, watching the ballgame, doing a little sewing, sitting in my new chair.

And listening to Stephen King's latest book. I'm no a fan of his supernatural stuff but he can sure tell a story. And his latest will probably have some supernatural in it but it enough that I don't care. PLUS, this book is 18 hours long which I love. The prospect of diving into a tale and not having to come out for hours and hours is very appealing.

I had a quick little affair with a guy from Texas. We both worked for IBM and collaborated on a couple of very geeky side projects that won us both both brownie points and extra change. He was older and had been at IBM longer and so knew all the tricks to geeky recognition. Without him, I would have geeked out on my own in obscurity. He was a really nice guy and we celebrated our victories in fine style but he was never leaving Texas and I was never going to move there so doomed.

BUT that geeky activity got me noticed by a hot shot at HQ. Mark was smart and sharp and fun and a big shot. And he liked me. I liked his company a lot. But, he lived in Connecticut and I lived in North Carolina and he was married. He never lied about it but still. I should have told him no thank you, call me when you are single. I didn't. He and his wife were on the way to separation and divorce but who knows what could have happened without me in the picture?

Anyway, we started something that lasted 5 years and 3 zip codes. I moved to Connecticut and he got a divorce. He was a study in contrasts. And he gave me many many very memorable moments. However, about half of those are great memories and half are really bad ones.

One Fall he wanted to take me to see New England season change and also Montreal (he was fluent in French and wanted to show off). We planned a week and it was fun to plan and anticipate. We left early one Saturday morning. We packed his cherry red sports car and stopped for coffee and headed to the Merritt Parkway. As soon as we got onto the highway, he turned on the CD player and out blasted - in marvelous sound:

I remember it as one of the most perfect days ever. Full of wonder and joy and laughs and beautiful things.

Then there was the time, while I was on a business trip, when he went to my apartment and found and read all my journals. This would have been not so good on its own except then he told me about it. For no reason. And wanted my forgiveness. That was tough.

And there were other instances good and bad - a roller coaster. Finally I had had enough and I told him it was over. And he said it was not. So I moved to Minnesota. He still wanted to come visit all the time and I said no and no and no and no. And finally, he heard me. (He then started dating a woman I worked with. They got married and Google says they still are. They apparently spend a good deal of time at artsy fundraisers in Connecticut.

In Minnesota, I was too busy with work to even think about romance. Then I moved to California. One of the guys at the lab where I worked was a season ticket holder at the San Jose Giants (Go Section F!!) and gave me his ticket one night. I sat right in the middle of his buddies. They introduced themselves and then the game started and we all watched. Then the guy next to me pulled out a cigarette and I heard a very familiar sound I hadn't heard in years. I said out loud 'Zippo??' Yep. We discussed. (My parents always used Zippo lighters. I loved helping them change the flint and fill them with fluid.) Then I won the trivia contest (name 3 players, currently playing, who never played in the minor leagues). I just happened to not only know them but knew their positions and teams. Bobby (Mr. Zippo) fell in love. It was pretty funny.

One of the guys in the group got transferred the very next week and I bought his ticket for the rest of the season and became a member of the group. Bobby and I became an item. He raced Porsches and felt earthquakes a good 5 to 10 seconds before any other human. It was freaky. He also provided me with the only time I ever felt physically unsafe with any man. He got out of control one night while we were in Monterey at a Porsche convention. It turned out fine, but I began the weaning process immediately.

Shortly after that, I moved to Seattle. He called one day and asked if he could come visit the next weekend. I told him I was busy. "Are you really busy or have to change the air in your tires busy?" He was funny.

While I was still in California, one of my good friends was married to an Apple executive. Apple guy had a brother who was a journalist in Tacoma. He'd come to San Jose fairly often and the four of us would play together. He was nice and kind of interesting but his attraction was his skill in bed. He was good. He was very very good. He became boring and borish and when I moved to Seattle, he latched on like a barnacle. I tried to shake him off but it was hard to try too hard because did I mention how great he was at sex? Cause he was. But, finally...

It was a Saturday. One of my pet peeves was that he loved to go to movies but was a total movie snob and insisted on delivering his 'learned' opinion of each movie for an hour after the closing credits.

I went down to his house and sat him down and told him we were done. He suggested one last roll in the hay and OMG was I tempted but no, I said The End. On my way home I spied a movie marquee advertising Sister Act. This was a movie he would have lowered his standards enough to watch. So I pulled in and bought a ticket and not only enjoyed the heck out of that movie, I wallowed in no post-movie critique.

And that was it. That was the last. The final Romantic Relationship. I never felt the need for another. There are too many compromises I would have to make and I've never met anyone worth making those compromises for. And that was early on. Now I cannot imagine sharing the remote control with anyone. Under any circumstances. Ever.

I do still enjoy those orgasms that I learned from that guy in South Carolina. Regularly.

p.s. As always, q's are totally welcome. Ask away.

Zoey's trying a new spot but meanwhile I've decided I don't like my miscellany junking up the table top. 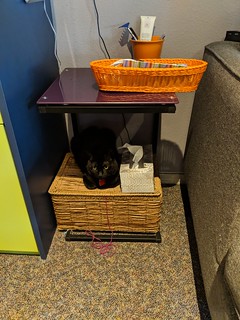 I looked around for a way to hide my junk and meanwhile Zoey figured her work was done for now. 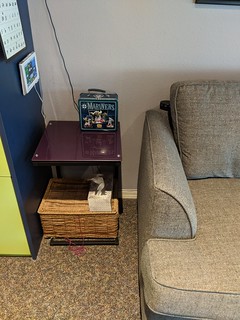 I'm not sure I love the solution but I'll hunt up a better one at Goodwill when I go Wednesday.

Meanwhile after some really miserable losses recently, the Mariners are ahead this afternoon 8-2 in the 6th, so we're having a lovely afternoon.
Collapse