I had hoped to meet the Dolly guy at Costco at 10:30. I'm out of the gym at 9:20 or so so what to do for and hour and change. I decided to pop into Grocery Outlet for english muffins and then pick up coffee and a sausage biscuit at McDonald's and then go on to Costco and wait in the parking lot til 10:30.

The line was slow at Grocery Outlet. And after I got my coffee and biscuit, I remembered I needed gas. So I got that and then parked at Costco and got a text that Carlos, my Dolly guy was on his way. It had a map and the map showed he was seriously nearly there. So, I hustled out of the car and grabbed a flat cart and made a beeline for the furniture. The chairs were stacked in a way where I could just plot one on the cart so I did. Text... he's in the store! I texted that I was on my way to checkout.

He popped up just then in a red Dolly shirt and a nice big grin on his face. He commandeered the flat cart while I paid and we got it into his truck and he followed me home. 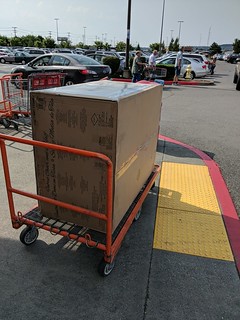 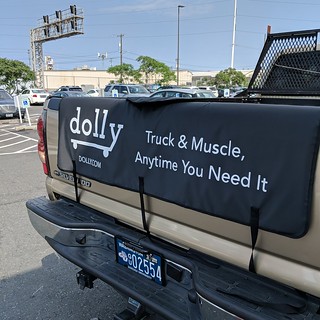 He got it into my living room without issue and offered to unpack it. I allowed as how I'd really rather help me get the brown sofa onto the dolly and he said he could do both. We opened up the box and I quickly figured out that I could handle it alone so he agreed to take the sofa down to the garage for me and I took him up on it. He got the sofa set up and then was on his way. I looked at my watch and it was 10:48.

Carlos got himself a giant tip.

Dolly really is a cool deal. I'm very impressed with the app, how they run it and, particularly with Carlos. There have been many times when I have passed on opportunities because I didn't have a way to haul something. Never ever again.

And then I went to work. The legs were a bitch to locate. They were stuck way up under the front of the chair but I found them and got them on. Getting rid of the box and packaging was the worst bit of all. My neck and shoulders may never work right again.

But, the chair is here and my ass is in it. The box is gone. It's the perfect size and it supports my back exactly like I want and is higher so easier to get in and out of than my other chairs. 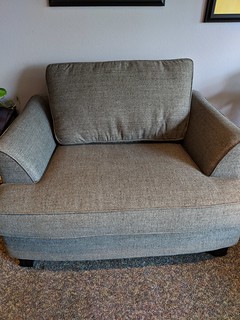 And there is plenty of room for YouKnowWho. 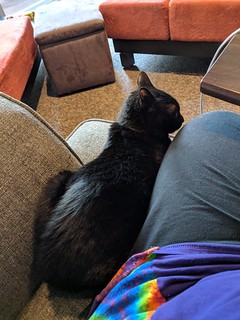 Meanwhile in Texas, my brother's chickens have gone to their new home. I had such fun watching them since they were little chicks via the web cams he set up. I was able to capture their last evening at his house. And their last night in the first coop he ever made. 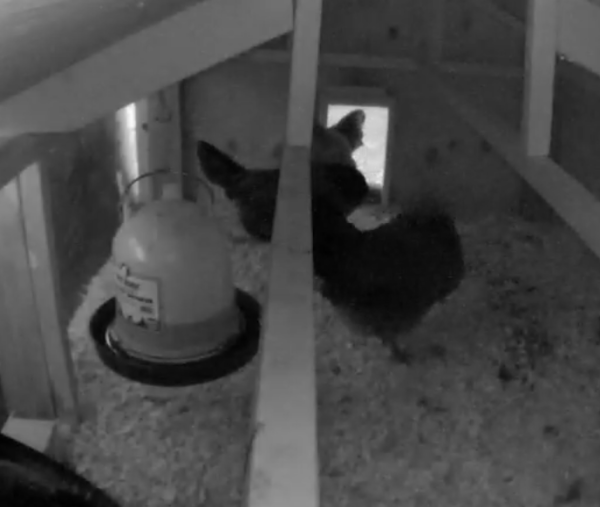 Bye, chicks, thank you for many hours of wonderful watching. Have fun in your new home.

I'm in love with my new chair. Hahahaha no, really, I am.

I think I need a new table to go along side of it - it needs to be higher and have more surface area. I wasted hours today shopping online. I found a couple that might do. But none that made me Add to Cart.

Not critical. This is something I can keep an eye out for. If I find the perfect piece, yeah. If not, the one I have will work til then.

The first pair of pants that I made have a small hole in them. They have lasted way longer than I thought they would. I will mend the hole and no one will ever know and they can possibly last twice as long. Making my own clothes is so enormously satisfying.

Baseball game watching and sock knitting... in my new chair. 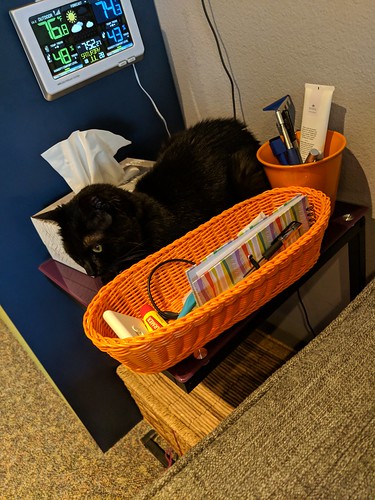