First off, I noodled out how to add an extra pocket to my new handbag. And then how I might attach the straps and how to test my idea first.

Then I moved on to the questions asked here yesterday that I will be answering in future entries. I reviewed/remembered romantic relationships. Then I walked myself back through all the pets in my life. And my first job and how it felt to work it.

In the last 15 or so minutes of my swim, I went back to the handbag and hit on a better way/place to add that pocket.

It was a very very productive swim.

The Mariners play a day game today. The TV broadcast of the game is one of those stupid Facebook only games. Even if I would lower my inflated standards to join Facebook, who the fuck wants to watch a baseball game on a social media sight???? I pay a gynormous cable TV bill every month so I can watch Mariner games on my TiVo - like God intended - with delayed start, ff through commercials and replay on my 55" screen. Not on Facebook. GRRRRRRRRRRRR

So, radio. You have no reply, and no way to skip through the commercials for which, they so nicely, raise THE AUDIO VOLUME each and every time. GRRRRR squared.

Plus, the Mariners had such a fun first half. Which makes this downhill slide even more tragic. If we had had a normal Mariner year - a few wins here and there but mostly not - accepting suckage at this point would be easy. We've done it ever year for the past 40. But, this time... it's a little more painful.

After we lose the ballgame, I am going over to the fabric shop, the one a couple of blocks from here - for a wallet class. I could make the one we're going to make without the class but I'm hoping to pick up some tips and tricks. Plus, I do like to support this shop. They piss me off about half the time but I keep trying.

I was just in the bathroom. There was an inch of water in a plastic water glass on the sink. Zoey tried to squeeze her face into the glass to get the water. She was unsuccessful. I watched while she knocked the glass over and then proceeded to lap the water up off the counter. WTF??? Her own water glass is full, BTW.

So the Seattle Police Department finally made their own lip sync offering and there's good news and bad. It is, hands down, the very best one I've seen. It shows the best of Seattle and plenty of it. And it's technically an amazing piece of work.

The bad news is that apparently, the Seattle Police Department does not know about YouTube. They put their video up on Facebook - where you must go to see it. You cannot replay it anywhere else. Way to spread the joy - not - SPD.

Here's nice piece the local NBC affiliate did on the making of the video. At least they know about YouTube.

Time now to get to finishing up that new pocketbook.

celluloid_jam comes through again. Romantic relationships. Ok. Let's get to it.

My first date ever was with Ted who lived 3 doors down from us. It was to the 5th grade (so 1960) and he asked me to the Patrol Boys' Skate Party. (Patrol boys were a team of kids (of the boy persuasion only) who served as crossing guards before and after school. We they helped the adult (paid) crossing guards. Since we all walked to school, crossing streets was a thing and guards were a big deal.

The party was at an indoor skating rink. We wore shoe skates which were a lot better than the far more popular key skates.

These are exactly like the shoe skates we wore at the indoor rink. 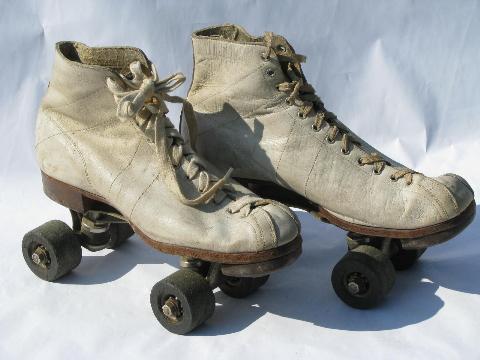 These are just like the skates we owned and wore every day outside. You put your shoe in and then twisted that key so that those clamps kept your shoe secure (yeah, right), then you fastened the strap around your ankle/top of foot. They actually did kind of stay on and work. But, if you lost the key, which, of course everyone did two minutes after getting your hands on it, you could never adjust them correctly. 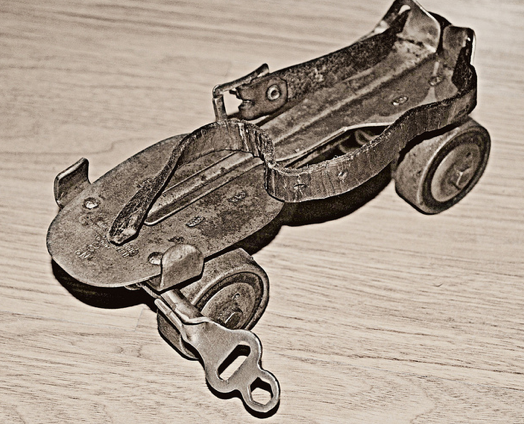 The next year, Carver asked me to the 6th grade Patrol Boys party. Carver's father founded Krispy Kreme BUT that was before Kripsy Kreme was a BFD. Back then it was just a company that supplied donuts to the grocery store. But, Carver was a catch for me because of his big sister, Patsy, who had been my counselor at camp and I thought she was amazing. She was a teenager and so everything I wanted to be. Anything I could do to spend time with her was totally worth it. And Carver said she would be driving us to the party.

I have no memory of boys between then and when I hit 15. My Mom said I couldn't date until I was 16 BUT then Eddie wanted me to go with the movies with him, in his car (or, rather, his father's) so, actually, a date. Turns out he got around the 16 rule because our mom's were friends. I didn't mind him too much but going in a car with a boy to a movie? Heck yeah! Also he was an older man - 2 years.

We did not look like this because we were not going to a football game so no flag or blanket. Duh. 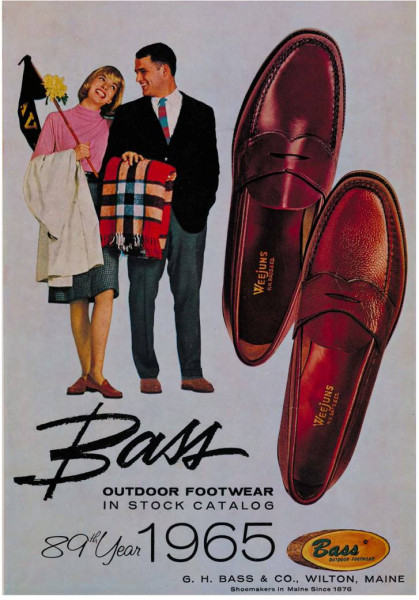 Eddie and I dated until he went off to college. And then, there was another guy who's name I cannot even remember. I do remember he wanted to come over one night when Mom and Dad weren't home which was totally against the rules NO EXCEPTIONS. So I said ok and we got caught kissing in the basement playroom and I got in so much trouble. So much trouble. I think I pretty much swore off all boys. Not worth the grief.

And then I went to college. I spent the first year wallowing in my autonomy. I had tons of friends male and female and no time for one special one. We played in groups. Between the minimal school work I managed to work in, I divided my time between playing bridge (for cash) and peace marches.

Plus, I had a personal issue. I was a virgin. Also I figured out that I was the only one left on the planet. I was embarrassed by it. It was like a cross to bear. Finally, there I was facing a threat of turning 21 years old without ever having sex even once. We got the month of January off and I got a job, for the month, at the newspaper at Wheeling, WVA. My agenda was to get two college credits and lose my virginity.

To Be Continued...
Collapse