This graphic is from the Seattle Times. It's encouraging me to love my air conditioner even more than I do already. 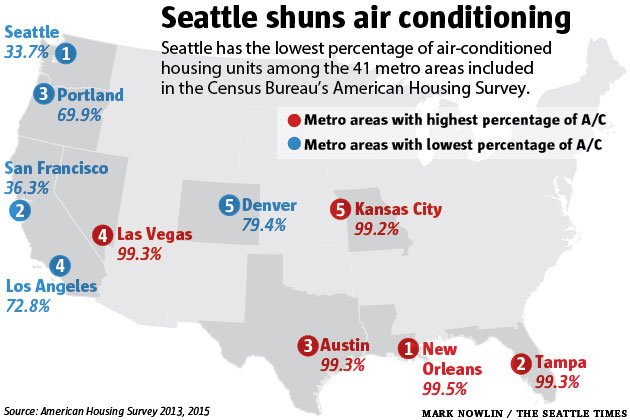 Last week they said it would be 90's this week but while this is hot, it sure could be worse. The humidity is listed at about 75% but it doesn't not feel that high at all.

Regardless, I plan to spend the very minimum of time outside. Until September.

Every morning, I check my bank account and credit cards. A good day is when I find no surprises. This morning, for some odd reason, on my Chase credit card, I discovered an 'auto pay' option. hmmm I thought, that's a good idea. Generally, on Fridays, I pay my credit card balances to zero. BUT, in case I forget or something slips by, this would be a good failsafe. So I set it up to pay off the balance automagically every month. And then I went to Capital One and Discover and did the same thing. Why in the heck didn't I do that a long time ago??!!

Then I set up a Dolly account and booked an appointment to meet them at Costco on Friday, August 3 to buy and pick up my new chair. The Salvation Army is coming on Thursday. I hope. If the Salvation Army flakes, then I'll pay Dolly to take the to Goodwill. I like having a plan.

This morning's plan is to see how the Chromebit works. And then I have some sewing. I started new socks. I have TiVo and Roku to watch. Plenty of ways to keep busy. But, first, as usual, I need to get dressed.

I have three monitors in the living room - for good, but mainly now vestigial, reasons. Two of them are tied to a Windows 10 PC and one to a very old, cheap, Chromebook. Well, the Chromebook died - RIP. And having a dark monitor makes me nuts.

BUT, while having a backup to my current Chromebook would be nice, it's totally not critical AND Google will likely be announcing something new, shiny and required by me to have in the fall so I'm not up for dropping $300 plus on one now.

But, the dark monitor. 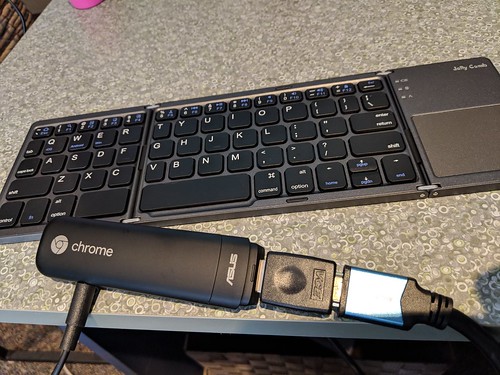 I plugged it into the attached HDMI cable hooked to the monitor and powered it up and BAM! I have a new computer. It's hilarious. And dirt simple.

The screen told me to fire up a bluetooth keyboard so I pulled out this foldable keyboard/mouse situation and it recognized it immediately. And then I got a screen exactly like the one on my Chromebook. So cool!

The little cigar thing has a plug for HDMI, one for power and a USB port for hooking up whatever - like a little hub for a wired keyboard or mouse.

In the picture, it's hooked up via DVI to HDMI cable but that was just for testing. Since the monitor didn't have an HDMI port, I got a vga to male HDMI adapter and so then just plugged the cigar into the back of the monitor. No cable even! I'm just delighted with the new toy. Cigar computer beats gynormous, heavy, slow, old HP Chromebook. For Sure.

I got a lot of other little things done, too. Like replacing the batteries in both car keys, selecting and cutting out the fabric for my sewing class on Wednesday, and picking junk around the house and putting it away. Now I'm going to kick back, knit socks and watch a little TV.
Collapse