God, I love clouds. And we've got them this morning saving us from that unrelenting stupid sun. The Sun will be back full force - 90's - at the beginning of next week but right now, we have a wonderful reprieve. There were even a few rain drops - well, drizzle drops - on the way to the pool this morning.

The housecleaner comes today and yeah! Because my brother was here, it's now been 3 weeks instead of the usual 2 since she was here and it shows. I'm going to ask her if she wants the brown loveseat and if she does, let her take it at her convenience. I can fill in the hole with other and then will be ready to pounce on a replacement if/when I find one. A good sit is important to this old fat woman.

Also I'll give her the TV in the bedroom. I know she'll want that. The new one arrives tomorrow.

Today is also the first day of her cleaning while the new air conditioner is running. She had a Dyson vacuum cleaner. I love Dyson's stuff but energy efficiency is not a hallmark. If she plugs it into the same circuit as the air conditioner, there will be a guaranteed circuit trip.

I won't be here but I can check the cam to make sure she's done and then turn the a/c back on and/or check it with my phone so the house will be coll when I get home. I love gadgets.

I'm going to meet my swim friend, Barrie, for brunch. It's been forever since we've had a catchup so I'm really looking forward to it.

There's a giant Amazon employee event going on across the street sometime today. I saw they had moved in the army of portapotties overnight. (Why oh why did they not build in enough bathrooms when they built the thing?? Seems like if you build a giant stadium/event center, you know how many people it will hold. Should be an easy math situation to get to how many toilets you will need. Apparently, their calculator was broken in 2000.) They say they are expecting 30,000 - oh but it isn't until tonight so no impact on my travel plans. whew.

As much as I like baseball, I can never get excited for the All Star game. But, last night I watched some of it. There were four Mariners there which was a record, I think. Our adorable little shortstop was the last MLB player voted in and so excited to go and then hit a 3 run home run to put the American League ahead. Then our closer who almost never ever give up a run gave up his first home run this year. Doh. Oh well. The funnest thing was that all four of the guys who went are on Instagram. They posted pictures and video for two days and that was VERY fun. 3 of the guys are Latina so I have no clue what they were saying in the video but it didn't matter. It was just fun to get the inside view. All the players on both teams spent most of the game with their phones out. I'm sure many of the old school watchers were horrified. I thought it just tripled the fun they were having. And since the point is to reward them, sweetening the reward seems like a good thing.

Ok, time to get moving. I need to get dressed and put things in place for this much needed cleaning!

The housecleaner was happy to get the other TV as well. So, yeah. She didn't want the sofa but Barrie said Salvation Army will pick up. They didn't used to pick up from locations downtown but, apparently, they have changed their tune. They have a scheduler online. Their first available was August 2 so that's what I picked. Yeah!!

Zoey's going to miss those big, fat arms. This is her now. 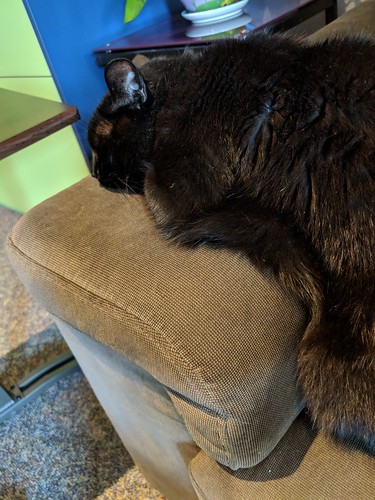 Barrie also suggested a consignment shop that I had forgotten about. Barrie and her husband have a house full of gorgeous and creative/inventive pieces of furniture. So I grilled her. After our breakfast I went to that consignment shop. They did, indeed, have some very cool shit but nothing that fits my current problem. Their website, however, has a wishlist so I added my wish.

West Elm has a couple of not terrible options that might even scootch past ok to good. I need to go sit on them but their timeline, price and fabric colors are better than anyone else's. The store is located in the middle of Amazon/Google/Facebook offices/dwellings so I'm pretty sure their clientele is not fat old retired ladies. I need to adjust my attitude and expectations before I got waltzing in there. And probably break out the bullhorn since I'm sure I will be invisible to them.

My house is clean again. And my scheme of turning on the A/C after the housecleaner left worked perfectly. I checked the camera from the restaurant and saw her turn out the lights and leave. Then I just hit 'power on' from the A/C app and when I got home all was cool. Very cool (hahahha I see what I did there.)

Next up is crochet. I promised to test a pattern so I should get to it.
Collapse