You could sure tell a holiday was in the air at the gym. Only the hard core made it in this morning and there aren't too many hard core. There was no one in the pool except me. And no one on the roads. Tomorrow it doesn't even open until 8. But, at least it will open at 8 so whew.

And then when I got home and started internetting, I discovered...

Mary Roach has a new book!!! It does not look like a subject I'd be interested in reading about but it's Mary Roach. With the exception of Stiff, none of her subjects interested me but her books about them turned out to be fascinating. So, here I go again. Besides delving deep into the very interesting parts of not so interesting topics, she is one of the wittiest writers I know. And, it is as delightful to consume 10 minutes of her as an hour. So I load up the Kindle app and enjoy her stuff piecemeal. I try to make it last as long as possible. I read and re-read paragraphs and chapters before moving on to the next.

It's just a delight to walk by my hallway shelves now. Turns out, I love having the fabric there and I love the voids I've created by pair down the stuff. I think I'm no going to wait until next Monday to tackle at least one of the two worst cupboards out on the terrace. Today and/or tomorrow, I'm going to clear them out and make a Goodwill haul. As much as I love acquiring shit, I think I love getting rid of it more.

But, first, I want to make another shirt out of that new pattern. I cut out the fabric yesterday for the next one but then, this morning, while I was swimming I created a couple of more in my head using different fabric combos. I'm jazzed.

Time now to go get dressed and get started.

I finished up the second shirt (another winner) and had some lunch and looked at tomorrow weather to discover it will be warmer tomorrow. So... I decided to strike while it was cool.

Plus, I remembered that next Monday my brother will be here. He's not coming to visit to watch me cull my shit.

I did two closets out on the terrace. Not completely but pretty freakin close. There were a couple of show stoppers. I started sneezing uncontrollably. Honestly, I'd rather sneeze without stopping than suffer one of my coughing fits so I was ok with that and the sneezing stopped shortly after I quit screwing around with dusty stuff. But I also stopped because I was getting passed doable.

I filled up my wheelie cart and then some. 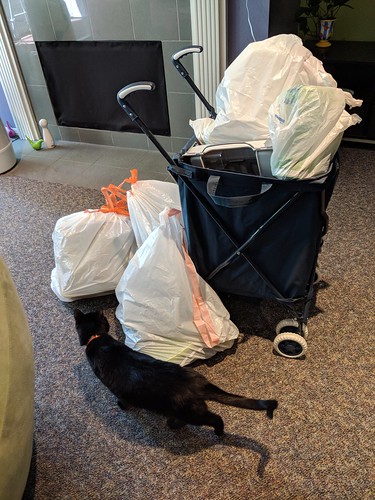 Zoey took on the role of inspector. This was just the Goodwill portion. There is another bag full of stuff for the dumpster. I figured any more than this pack maneuvering down to the garage and then getting the car loaded was enough fun for one day so I stopped. And made the Goodwill run. When I got back, as I pulled into the garage, I remembered I had totally forgotten to pile on the stuff I collected last night! GRRRRRR. Maybe I'll make a special trip Thursday or Friday.

But, for now, I have empty shelves outside which is wonderful and luxurious. Now I'm going to collect up the bag o' garbage and the kitchen garbage and make a run down to the dumpster and then I'm going to settle my large ass into my TV watching chair and do nothing for a bit.
Collapse