Friday, I found some gaffer's tape at Amazon that I wanted to order. I'd like it soon but I'm not killing for it immediately. The cart said it would be delivered Sunday. I'll be gone most of Sunday so no thanks. I waited until Saturday to order. Amazon says it will deliver Monday. Perfect. Except. This morning, I got a text that says will will be here today. Natch. And, it looks like it will arrive about 15 to 20 minutes after I leave. Murphy's Law.

On the way back from the pool this morning, I saw scalpers. Ticket scalpers. For a Mariners game. Out two hours before the gates open! A rare sighting.

I have a Diamond Club ticket to today's game. It includes brunch so I haven't eaten anything and I'm starving. But a banquet awaits so no biggie.

It's lovely and cool and cloudy, although the sun is supposed to come out later which could make it uncomfortable at the game. But, that's the price you pay when you go outside. Sigh.

Apologies to Amazon, my tape just arrived. Thank you. Also when I went down to get it, I discovered that someone has a new jigsaw puzzle started and they've already done the edges!

Ok, it's nearly time to head out. A win would mean a 7 game winning streak which doesn't even compute so I'm just hoping for a fun time.

This is an all baseball entry.

We have a pitcher, James Paxton. Last year he spent much of the year injured. This year no on knew what he could/would do. At the start of the season the Mariners were in Minnesota for their home opener. They had this eagle what was somehow part of the show. James Paxton was standing out on the field when the eagle went rogue. He buzzed Paxton's head and then sat on his shoulder. Paxton was totally unfluffed. This was not a small little eagle. This was a full sized eagle or what I would call a Big Mother Fucking Eagle. But Paxton just stood there, eagle on his shoulder til the keeper came out and got the eagle. It wasn't long but it was pretty funny.

Paxton is from Canada. And a really really nice guy. He has his own cheering section. It's got a maple tree and Canadian flags. And the people in that section have cards that say EH. And, instead of chanting K K K which is that you chant when a pitcher has 2 strikes and you want him to get a third,(K stands for strike in baseballian.) everyone in the park chants Eh Eh Eh. It's pretty funny.

Meanwhile, since that eagle sat on Paxton's shoulder, he's lost 1 game. And... won 8. One of those 8 was a no hitter. His no hitter was in a Toronto game. In Toronto.

Today was the 8th win. And it was Paxton bobblehead giveaway game. And the bobble head of Paxton has an eagle on its shoulder. Since promotions have to be planned so far ahead of time, it is very rare that a pitcher pitches on the night his bobblehead is the giveaway. Since Murphy and I are so tight, I figured it would be a totally jinx for Paxton. 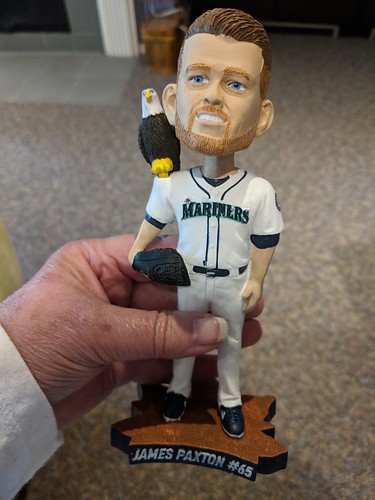 It was not. We scored 1 run early in the game and that turned out to be the only run of the game. It was fabulous and such fun. It was only 2 hours long which kind of feels like we got cheated but since we won, I'm ok with it.

Next game (for me) is Friday night.

Oh and one more Paxton bit... After his no hitter, I heard him interviewed and he said one of the neatest things about it was that his parents got to be famous for a week "They were interviewed by everyone in Canada I think and they loved it."

Also, the Mariner moose sported his own eagle. 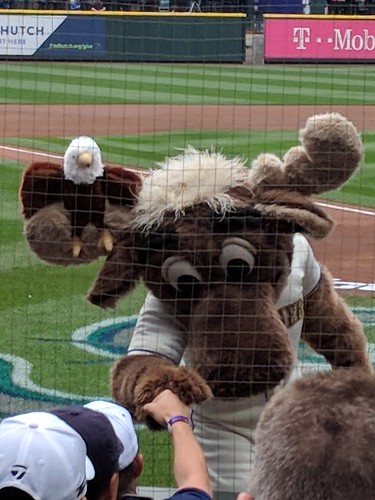