I would love to have a dog. But, honestly, what I really want is a part time dog. Or maybe even a rent-a-dog. I wouldn't mind walking one... once, maybe twice a day. But, I'm afraid I do not have what a dog needs. A cat who mostly takes care of herself is my speed. Alas. But a dog would be so much fun to have...

My Roku TV has screensavers that are fun. I found/launched a free aquarium one that I really have enjoyed. I found a puppy one but it's a buck a month and that's just ridiculous. Also a kitten one. Same deal. And then, this morning, when the same fish came on the TV, I thought, well... maybe I could buy a month of puppies. So I did. It was only then that I realized that the $.99 was not 'a month' but a one time, old time app purchase (remember $.99 apps???). So now I'm happily watching puppy pictures.

And speaking of cats... Yesterday, Zoey bugged the crap out of me for food. All damn day, and, when I relented, ate a ton of it. I'm talking wet food. She has a giant bowl of kibble always available. Except last night. I checked the giant bown and it was full of kibble bits. The little pieces that break off. She never eats those. I have no idea why. Her teeth, recently checked, are fine. But still, she always leaves the kibble 'bones'. Sure enough, when I tossed out those pieces and filled the bowl again, she quit begging for wet food. When she hopped up on the counter for breakfast, I dished it out, she took a sniff and wandered off. Ok. so that's the way we're doing it today. Gotcha.

I have no big plans today but as I sit here, there's a lot of little stuff like fix the a/c door insert, put away all the plugs in the pile on the desk, finish sorting out the shelves and empty that big drawer of scraps - either toss them or put the with the Goodwill stuff. I have a top cut out and ready to sew.

So plenty to keep me occupied. And, I think today might be a good day for a nice, long, walk. Maybe I'll go pick up a poke bowl for dinner. Baseball at 4.

I totally forgot about my Monday pledge (the one I made yesterday??) until I had done it three times over. My pledge was to fill one bag with stuff to take out of this condo.

Here's what went out today. 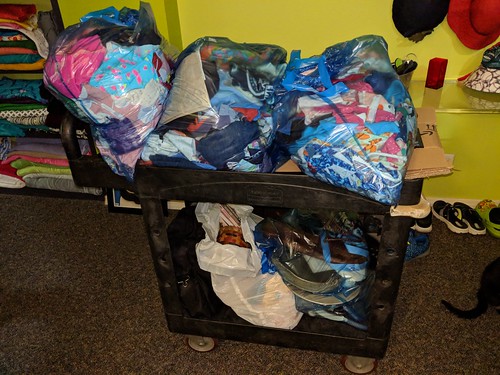 The top is for the recycling bin and the bottom is for Goodwill. I have three deep drawers in the sewing room. One has bear/doll stuffing in it but the other two were full to the top with stuff. I got to the bottom of both and even when I put the stuff I'm keeping back in them I can still see the bottom. I call victory on those drawers for sure.

I found some big scraps I did not know I had and can definitely use. I finally threw out all the swimsuit scraps which I definitely cannot use but couldn't, until today, bring myself to toss. A lot of the shelf tchotchkes are gone. And I'm glad.

I did not want those bags in the house once, I filled them so I just decided to finish the job. Stopped at the dumpster and then loaded up the car and went to Goodwill. I feel very accomplished. I still have more to do - more even on the shelves. I need two more for fabric and there's shit on the others than can go. Next Monday.

When I went down to the garage to get the cart, I ran into Jathan the building manager who said "Sandy wants all those carts returned." WTF?? The carts are for residents to use. The sign on each asks that we return in 15 minutes. There are 6 and there were 5 there when I took one and 4 when I returned it. (Sandy is the HOA President.) I stopped at the recycle bins and then put the stuff in the car and then returned the cart. Jathan was standing there. I said "I'm not sure what was behind your snotty remark but I'm returning the cart in well under 15 minutes and I'll make sure Sandy is aware." I composed an email to Sandy in my head but then decided to just drop it. Life's too short and my letting those two mar my appreciation of where I live serves no one - particularly me!

BUT then I ran into Sandy in the elevator when I got back and so I told her that I had returned the cart in 10 minutes and would go back to rarely using them at all. Apparently there were none there this morning and she told Jathan to get them back. I made my point and was very glad when the elevator got to my floor.

I think I'll find some junk TV to entertain me til game time.
Collapse