Today's a regular day - my favorite kind. Sewing projects, knitting projects, baseball at 5. I even have dinner already done. I made a great baked chicken dinner last night and, really, accidently made twice as much as I could eat. So tonight's the other half.

Oh and the breakfast burritos I made yesterday are perfection! I make them mostly the same every time but there's always variances. Thin layer of butter, cheese, capers, eggs scrambled with a little cream, salt and pepper. Last time I had too much cheese and I tried a couple of different kinds and the capers were too big. This time regular little capers and sharp cheddar and not too much. Perfect. And even gooder news is that I made 8. Usually I make 4 or 5 but I got ambitious yesterday.

The 3 ingredient oatmeal, banana, chocolate cookies were pretty much a fail, however.

The automatic shades have been acting up lately. They wouldn't respond to the app or I'd issue the command to lower them all and 2 of the 4 would go down. I tried a bunch of different things and finally, on Reddit, I read where someone moved his hub and got good results. So that's what I did and it did nothing. That was Sunday. Yesterday, when I tried Sun (that's the command to lower the two on the left and the one over the door 3/4ths the way down), it worked the first time. And this morning, the app recognizes all four with strong signal indicators! Looks like the new hub location just needed time to prove itself.

Also on Reddit, I read that the Pixelbook (my every day computer) has enough of whatever is needed to 'hold' the pen in place. ???? Turns out it does!!! So that sucker just hangs there until I need it. Honestly, I don't use it that often but when knitting from a PDF pattern it is perfection to mark the rows off as I go. Having the pen just magically hanging there is the definition of handy. 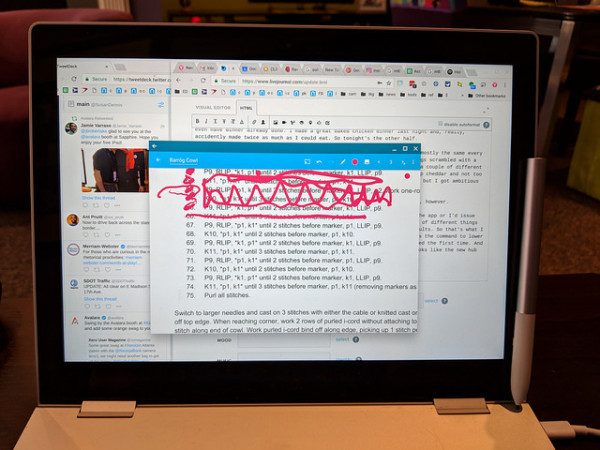 Spotify has finally figured out what I like and is now giving me a daily playlist. And, of course, it's spot on. A lovely mix of stuff I've heard and stuff I've never heard but like a lot.

I have some errands to do this morning so I think I'll get organized and go get them done.

I went to the pot store today. It's such a nice place. I told the woman who waited on me that I needed a chill pill. Something that will bring out the best me. I told her smoking was out and I wasn't big on the candy, gum and eating stuff. She allowed as how that left pills, spray and body rubs... Pills take the longest to kick in - an hour - but last longer. Spray under the tongue is immediate. I picked that. Specifically Turn On Happiest Self. I didn't try it. I'm saving it for the next time people piss me off. Should have to wait too long. 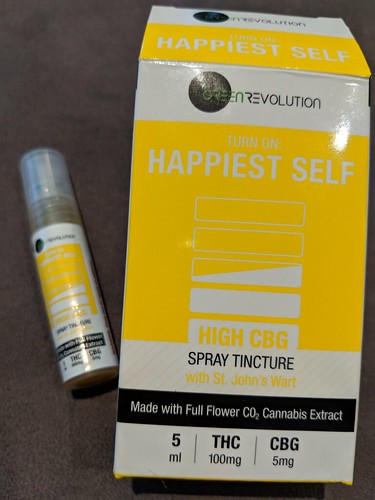 Pot shops are such fun. And the people who work there are just nice.

Then on to Grocery Outlet where this very young cashier girl was just as kind and gentle and sweet to two homeless guys as she could possibly be. She helped them save some cash on their purchases and, at the same time, went out of her way to show them respect and they reflected that right back. It was very cool to see.

I also stopped at Cash and Carry. I wanted to find small cardboard trays (like the kind french fries come in but way smaller). They had exactly what I wanted and the size was perfect. $4.50 for 250. Amazon wanted $15.00. Sorry, A. You totally lose this one.

I've spent the rest of the day piddling around here doing this and that and nothing important or even very interesting. The weather continues to be lovely. Right this minute my thermometer says it's 71 outside and 73 inside. Fine by me. Baseball starts in an hour.
Collapse