Julie, of Julie and Erica who share the seats next time at the ballpark, left at 9 pm citing 'school day'. (Erica was in Dallas.) It was the top of the 6th inning. We were ahead 6-3. It was a good game. Assuming she was parked nearby, Texas had tied the game before she got to her car. And then they scored in the 8th and we came back with 2 runs and then they tied it in the 9th.

By this time, it was late but what did I care? I didn't have to get up fer nuthin. The three seats on my right - which are casino giveaways - were occupied by 3 women who were there only for the free drinks. They arrived in the 3rd. Took selfies through the 4th. Checked Facebook in the 5th 'Oh! that's what the protests are for. Israel. They killed a bunch of people and now people are protesting Israel. That's stupid. How can you protest a whole country??' For the 6th and 7th, they discussed the new boyfriend of one of them. And, at least once a half inning 1 or more of them got up and trampled across me even though going to their right was 3 seats shorter of a trip. Finally, gratefully, they left at the end of the 7th.

I do not mind at all when people leave. Unless it's the vocal fry triplets, I don't even think bad about them. (Trust me, I felt naked without a black robe the way I was judging those bitches.) I love the extra room around me. And, those that are left, they are focused on the game. There's no more beer for sale. There's only the game. And it's actually pretty fun to be surrounded by people who are there just for the game.

By the end of the 10th, I had the row to myself. I could get up and go pee! I never get to do that in the middle of a game. It was liberating. Bottom of the 11th. 2 outs. We win. It was wonderful and the dozens of us remaining cheered very loudly.

I got home at 12:15. I haven't seen midnight in many years. It wasn't that impressive.

Today is way cooler. Yeah!!! The air conditioner is resting and the door is open and all is quiet. I just saw the house cleaner on the front door cam so I guess I'll wrap this up and get ready to head on out to Walmart and other errands. The ballgame today is at 12:30 so I need to get back before the traffic hits.

LJ quit posting instagrams for some mysterious reason and there were a couple I want to add for posterity.

This is my latest top. The polkadots are a woven (non stretch) and the rest is knit. It still needs sleeves and pockets and finishing but I love it. Love the colors and love the dinosaurs. 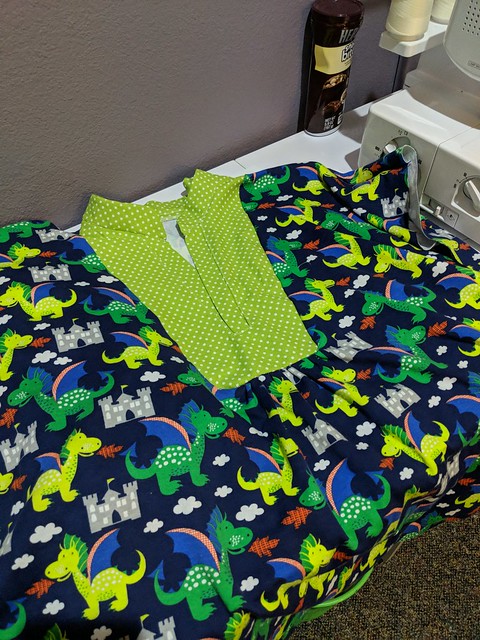 This is from last night. My favorite Mariner shirt is one I got years and years ago. I ordered it from a shop in Hawaii. I've never seen one like it and judging from the reactions I get at the ballpark, I'm not the only one.

But last night, a woman was shown to her seat at the table next to me. She looked up and said OH! My husband is wearing that very shirt!! Sure enough, in he comes ... my shirt twin. He was very cute about it. I think I got mine in 2005 and he thinks he got his in 2011-ish. He bought his in the same shop but he was actually there. I told him that they were no longer available and he was shocked so he sat right there and called the shop! He learned that, in fact, they haven't been available for years. They have them for Yankees and Red Sox and a few more teams but not the Mariners. It's a licensing thing.

The guy demanded a photo. He wanted to send it to my iPhone until I told him it was Android. He did not skip a beat 'I can do it the old fashioned way. What's your email?' He was as fast and sure on that iPhone as any teenager. I was impressed. The result is cute and a keeper. 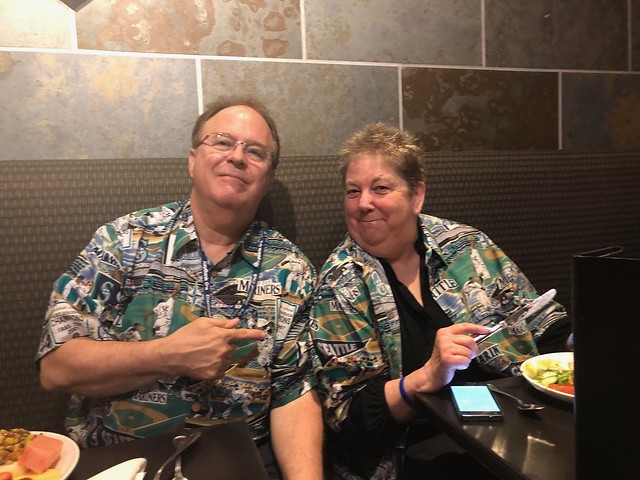 My manicure from last Friday finally bit the dust. 5 days - not bad considering I did nothing (no top coat refresher). This time I used a base coat, 5 minutes between coats and I was very careful to make each coat even. We'll see.

Today's video broadcast of the game is on Facebook only and you have to log in to get it. So... I'm channeling

meowmensteen and listening to the radio broadcast. These players had a rain delay on Monday in Minneapolis so didn't get home until early Tuesday morning. Then an 11 inning game on Tuesday and an afternoon game today. I'll bet they sleep well tonight.

And speaking of which, I slept great last night and didn't wake up until 6:45. Usually by that time, I've had my swim and am finishing up breakfast. My tracker isn't happy but I sure am.
Collapse