So... last night, the Mariners were losing and then, late in the game, they took the lead. Then later, they lost it, then they were tied - innings 8, 9, 10, 11... the lead changed hands every half inning. Sadly, I fell asleep in the 10th. When the Mariners were behind. So, when I checked this morning to see they won 9-8, it was a delightful surprise! I set the TiVos to record every game - for 4 hours. Alas, this did not capture the 11th inning. (I think I may just extend the bedroom TiVo out to 6 hours - barn door, etc but hey, it happened once.)

Today's game is our best pitcher against their (the Angels) brand, spanking new phenom. Should be more interesting than usual especially after last night's game.

My arm where my shingles vaccine went in is more sore today than it has been yet. There's a baseballs sized swollen red spot and it kind of made swimming a bit of a chore. At least for the first 15 minutes. Then I kind of forgot about it but still. Glad I don't have to go on the red carpet tonight in a sleeveless gown. (Actually, let's make that glad I never ever have to go on the red carpet in a sleeveless or any kind of gown. Just for the record.)

My brother is still in the hospital but feeling way better. They found a heart thing that they are working to fix with medication and expect to kick him out tomorrow.

I tried the chess pie last night from the new pie place. Nope. It is nothing like the chess pie I remember. Different flavor, different texture, different color even. Not horrible but not delicious either. Tonight I'll try the pecan.

It is almost warm enough in this room to dig out a fan. Not A/C warm but warm. The terrace door is open and the drum band that rehearses over on the far side of the football stadium is playing away. I love hearing them on Sundays.

Google's spellcheck is making me a little crazy. It recognizes misspelled words but rarely gives me the spelling for the word I want. The assistant on my phone is negative help. By the time I have told her and she has misunderstood over and over and over again and I finally have to type in what I want, I'm so pissed that any joy in getting the directions or whatever it is I'm after is gone. It used to be so easy. And now it sucks. At least, at home I have Alexa who spells whatever I want whenever I want and now waits for me to say Thank you and responds to that. I think that Google bitch may be jealous of the thing that Alexa and I have going on.

Zoey has favored the new grooming brush thing I got her since I first put it down. She loves the brush and lies all over it a lot of the time. But no scratching on the posts and she didn't seem to notice that there was a top layer. Last week, I put three of her favorite treats in the hammock. They sat there for days and days.

Today she found them and has been lounging in the hammock most of the day. She gets down and does stuff and the gets back up. She's even used the scratching posts. I haven't seen her play with the hanging ball yet but I also need to swap that out for a yarn pompom so no biggie.

I did not spend a bundle on this thing and bought it with the idea that she wouldn't touch it and I could toss it out (to Goodwill) and finally get that grooming brush out of the living room.

But now I'm captivated that she's taken to it. It will probably fall apart in a couple of weeks. Oh well. 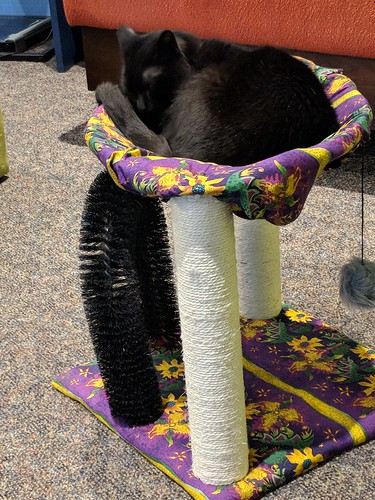