ljtourist turned up in my neighborhood yesterday afternoon and pinged me for coffee. It was great to catch up and always fun to visit. He told me about a new pie store which lists Lemon Chess Pie as one of its staples. Lemon Chess Pie is one of my all time favorite desserts and unknown in these parts even by pie aficionados. And this pie place has tarts. Pies for single people. So, now I have to go find/investigate this new pie place.

My immediate plan was to go today when I go out to get my shingles vaccine. Only then

jwg chimes in that his doctor suggested he old off on the new one cause of some problems. This caused me to google it (which I should have done anyway) and, while I can't really find problems, I did find arm hurty. When I got my original shingles vaccine - now known as the old one - no one warned me about arm hurty and OUCH. And ITCH. This new stuff sounds way more severe. And I'm not sure I'm up for it. Plus problems.

The game last night was great and my losing streak has ended. Yahoo! It was sad without Ichiro but every time his photo came up on the big screen, he got a resounding cheer from the crowd. ALSO, I learned that the couple to my left are Erica and Julie. They have the same 20 game pack that I do so we've got a lot more bonding to do. The seats on my right - 3 of them - are casino tickets handed out for winning stuff. Last night they went to an odd but nice couple and their friend. My next game is on the 15th.

This morning I woke up to a really disconcerting email from my brother saying he was in the hospital. An email yesterday said he was recovering from some nasty virus or something but then last night it went bad again and he went to the ER. The hospital is so germy. I hope gets out of there soon.

In addition to pie, today also needs to be laundry day and sheet changing day. And I need to go in and clear some songs off my swim player's playlist. So many songs from the 50's and 60's sound wonderful to my ears until I really listen to the lyrics with those same, now 2018, ears. We made some really offensive stuff popular bac in the "good old days". This one - clearly an old folk song from way back - was all over the airwaves and on record players across the country when I was a teenager. I've known all the words since forever. And never really heard them before. I have now and that song and some of the other bro music needs to be weeded out.

I had a sister Sally, she was younger than I am
Had so many sweethearts, she had to deny them
But as for sister Sarah, you know she hasn't many
And if you knew her heart, she'd grateful for any


(I was telling Frank about this yesterday and twisted up some of the offense but even when I untwist it, I can't stand to hear it. Off it goes.)

I found the pie place. It's a weird place that is either going to set the world on fire because the pies are so good, or be gone before Summer. Hard to tell which. I haven't tasted them yet. I think it's going to be peach cobbler after dinner tonight. They have regular sized pies, what I would call regular sized tarts and tiny tarts. I got the regular sized tarts.

Before pie, there was the shingles shot. I almost decided against it many times but finally got to the needle part and I was all in. It's a two shot deal and, reading the literature, it sounds like you should already have had the old (live) shingles vaccine before you get this one. The pharmacist was very cool and very bullish on this vaccine. You have to wait 2-6 months for part deux. He suggested that I get it when I go in for my flu shot. Brilliant plan and one I'll remember.

I almost nearly went up to the fabric shop that is closing. Not even close to on the way to anywhere or on the way home but everything is 40% off. I didn't find much when everything was 10% off so at the red light, I convinced myself that I'd just buy stuff I don't really want. And came home.

All the laundry is done and put away and the bed has a fresh outfit. I never got to the sewing room but, hey, it will still be there tomorrow. The puzzle is coming along at a very nice pace - not too fast, not too slow. 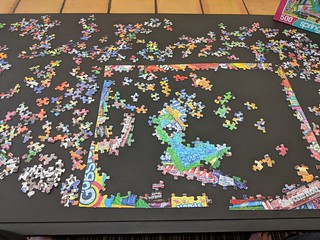 I have not heard anything from my brother. If I were on facebook, my sister-in-law would keep me up to date but she doesn't do any communication unless it's via facebook and I don't do facebook. So... I can just hope that I get the 'I'm fine all's good' email from him soon.

First week of the month... paydays! My income comes from 3 places but it all lands on the 1st and 3rd of every month. I was just looking at this month's finances and got all excited that I would be able to beef up my savings considerably since I have no big expenditures this month.

Then my car told me it was time for its annual maintenance visit. Sigh. Oh well, at least I have the cash.

This car has to last me to the End of Days so, I'll take it in next week.
Collapse