My family is rife with old age heart issues. Of my parents and my grandparents, only one did not die of some heart related something - at age 75 or older. (My paternal grandfather lived with painful glaucoma for years and lived longest of all but he spent his last two decades as a basic broccoli.) Anywhoooo. I've always assumed my own heart had a shelf life shorter than everything else in my body.

I just hope when it gives up, it does so quickly and painlessly. I don't do tests. I've had a great life and when my time is done it's done. All this is a prelude to a very odd sensation I got in the middle of my chest (just below the boob shelf) yesterday. I was sitting down and had been sitting down most of the day. It lasted just long enough for me to wonder whatthefuckisthat and why won't it go away. It did. Today it came back while I was swimming. A couple of times. I'm not going to do anything about it. Just documenting here in case I need the info later.

But ham. Here in the Pacific Northwest, ham is a minor meat. Beyond sandwiches, it is rarely on the menu. You can find it in the deli sections of grocery stores but it's not great ham. Just ok ham or ok ham adjacent. Sugar cured pink ham.

We do have some specialty stores that have a nice variety of Italian cured hams. But you aren't going to make a steak out of those.

Growing up in the south, ham was a staple. A breakfast, lunch, dinner, snack staple. Ham was on everything. Ham was the star of a wonderful dinner party. Ham was cured in a million different wonderfully delicious amazing ways. Everyone had ham in the fridge for emergencies.

The very best. The crown. The creme de la creme of ham was country ham. County ham is ham that is smoked (mostly hickory) and then salt cured for months. It is now pink. It is the color of fine burgundy. It has a perfume that you can smell with your tongue. It's delicious. There is a butcher (or used to be) here who sold country hams but only sold them whole - not in slices - so out of my reach.

A country ham biscuit is about as good as it gets eatin' wise. We can't even get good biscuits here (although that is changing little by little). And, in fact, there is a place, down at Pike Place Market where two guys from North Carolina sell country ham biscuits and, while they aren't as good as you can get in the south, they are pretty darned good for salmon country.

My brother made country ham biscuits this morning and sent me a picture from 2,000 miles away. Torture. Sigh. 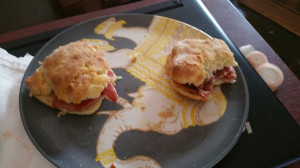 Last night, I was scrolling through TiVo and found 4 episodes of something called Imposters. I started watching the first one and realized it was season 2 of an obscure show that I found last year and LOVED. It's a Bravo show and so good. What fun to have season 2. Thank you, TiVo.

Today's baseball game starts now. So after the game I'll still have lots of day left so I might just be making a new swimsuit.
Collapse