I did not watch Jesus Christ Superstar last night. I recorded it because I wanted to see it and keep it. I like the play but I love the music so much. Since it first came out. I remember everyone being scandalized by the very title of the play. Really. We had just moved to NYC where it was only a little scandalous, but our friends in North Carolina wouldn't even say the name out loud. They called it Superstar. I'm looking forward to savoring the recording of it.

It was nice to get back to the pool today. There were two other swimmers - both regulars and both hour swimmers. We had all the lanes covered. It was nice and peaceful.

I have a shirt cut out and ready to sew. But now that I've got it on the brain, that living room cupboard reorg is calling my name... I do have a lunch date so starting the reorg seems like not a good idea since I might not be able to finish. But, maybe I will anyway. Just to get it off my brain.

Also I will be going to Goodwill on Wednesday so I want to do it before then so I can include, hopefully, a bunch of it in the Goodwill bag. So, yeah, I think I'll do that. I just finished the book by the mover so now I can fire up Terry Gross's interview of him. In the book he talks about how truckers love NPR (because it's the same all over the country so you never lose it when the station changes) and how he imagines being interviewed by Terry Gross as nirvana.

My baseball has a day off today so maybe I'll watch JCSS tonight.

This is The Cupboard That Needed To Be Tamed. 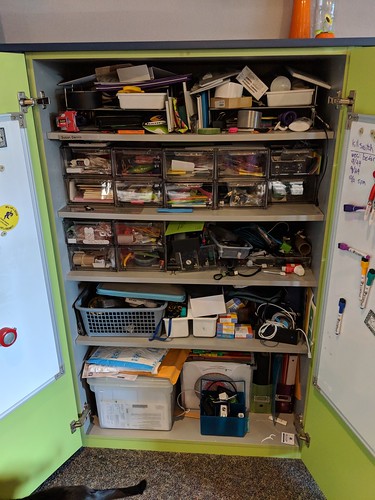 I emptied it and discovered it was a bigger mess than I thought. 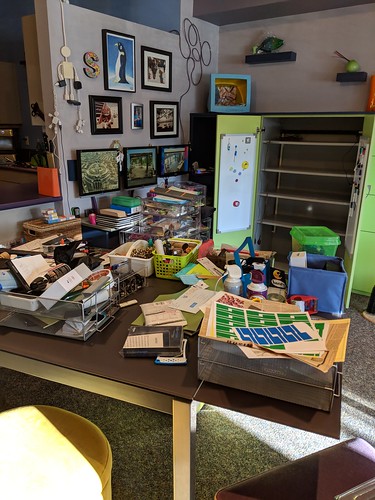 On the other hand, I found shit I had no idea I even had. Two... not one but two rulers for comparing mono spaced fonts with those of proportional spaced fonts on a typewriter. Not clear to me how I've gone without them for so long. Also in there were about 50 hanging folders - nothing hanging in them, just the folders. Since I no longer save paper or have a place to hang folders, they are going, along with a shit ton of other crap, to Goodwill.

I gathered like shit with like shit and got it all into various bins and actually ended up with lots of empty bins and some spare shelf real estate. SCORE!! Now, when I open those doors, instead of spewing words not fit for Sunday School, I just smile. 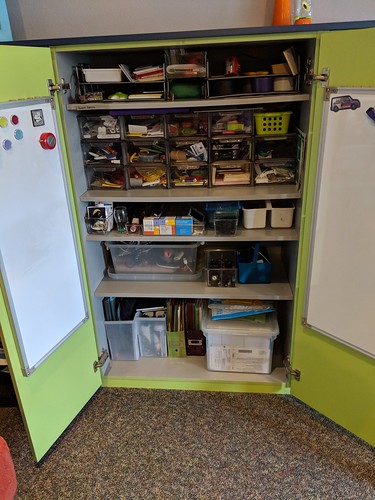 I went to lunch with Sandy. It was weird but ok. She often makes me feel like she's doing me a favor by granting me an audience. This was particularly annoying today since she was taking me out to lunch for my birthday. It's little things like she picked the time - 11:45 in the lobby. At 11:55, no sign of her. At noon I sent a text. And she finally showed up. Since I'm one of those very annoying chronically early people, I have more patience than most with people who are late but clearly she had trouble today working me into her her busy schedule. I offered more than once as sincerely as possible to postpone and the response kind of made me feel like she just wanted to go ahead and get it over with. I like her and admire her but I'm not sure I want to spend much more 1 on 1 time with her.

I did ask her what was on tap for tonight's HOA meeting and she gave me the rundown and it sounded boring so I might skip it.

In very bright news, I heard from my Mariners person. He had told me last March that I could sell my the parking pass that comes with my ticket but I'll be damned if I could figure out how and really, honestly kind of forgot until I was at the game on Saturday. So yesterday I sent him a note asking how. Turns out my ticket was broken - no parking attached. He got that fixed and then walked through how to sell it and sent me the clues and now I can offer up all my parking spots! It looks like the going rate is about $30-40 on StubHub. I listed the 2 for April today. Be nice to pick up some spare $$.

Plus, almost more importantly, he's so nice to deal with. Very very responsive and sharp and no bullshit.
Collapse