I was kind of surprised when I got home from swimming and did a couple of things and then on the way to do something else, I realized it was time to leave for the game. But, I had gotten all my stuff together so I was ready.

It was a nice walk to the ball park and lunch was delicious. I watched about 45 minutes of batting practice and then 15 minutes of pregame stuff and it was great.

A family of 5 came in and sat down in front of me. There was the Mom then the Dad then two boys and a little girl. The little girl was maybe 3 and the boys were maybe 13 and 10. Those boys were in charge of that little girl and it was so sweet. It was clear that the three of them have a special bond. It was fun to watch them. 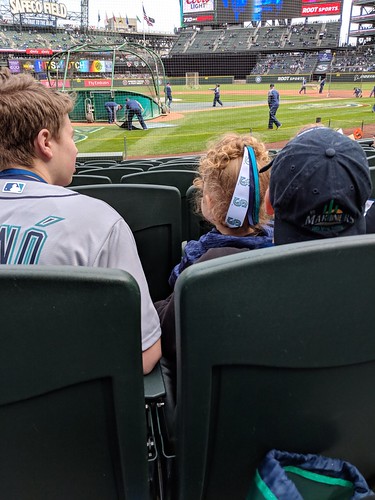 It was also very fun to watch Ichrio. He grabbed a ball over the fence and blocked a home run topping it off with a somersault off the wall. It was very fun and impressive. 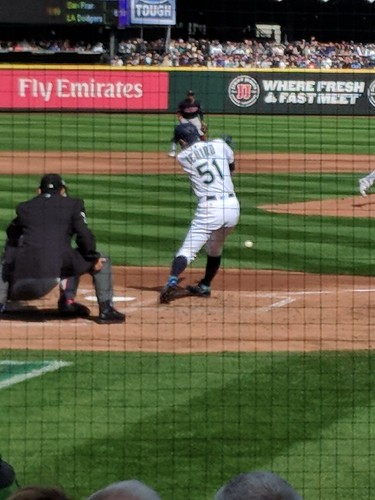 We lost the game but there were lots of great moments so the day was not a loss at all. The walk home was a killer. My hips were screaming. I thought I'd done a good job of standing up a lot but apparently that was not enough. Ouch. I may well be taking that scooter next time. Next time is another day game - a Sunday game in mid-April.

The sun left our seats in the middle of the 1st inning and the wind was blowing and it was cold. I ordered coffee - to hold - but I never got it and didn't bother asking again. When I went to get my house keys out of my back pack coming home, I saw that I had been smart enough to pack gloves! Not smart enough to put them on when my hands got cold... baby steps.

I did find a hole in the pocket of the coat I made (missed the seam a bit), so I need to fix that - but I got several compliments on it. I also got compliments on my Mariner shirt. I need to sew up those side seam pockets, however, and add patch pockets instead. All doable.

Now I need to feed a cat and get something to drink. I'm planning an evening of knitting and TV. And, I think, cereal for dinner.
Collapse