Since I recovered from the plague that was December and January, I've reverted back to open mouth sleeping meaning I wake up several times a night with a desert dry cavity that almost hurts it's so dry. I've tried lots of different things and some work better than others but one that really did the trick last night was cranking the bed up way high. It looks very uncomfortable but gave me great sleep. I cranked it up after the second time I woke up with desert mouth. Tonight I think I'll try starting off that way and see if I can keep from meeting Lawrence of Arabia.

I enjoyed my swim this morning BUT, I just sync'd my watch with my phone and turns out I really enjoyed it! My pace was a good 6 seconds faster than normal which is freaky. And I did 150 yards more than I meant to. Win for me. It wasn't nearly as crowded as it usually is on Saturdays so all in all very excellent.

I'm trying out a new shirt today. One with envelope shoulders. They happen a lot with baby shirts - like this: 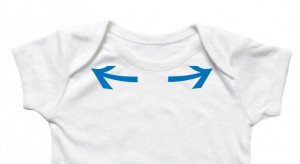 But, I want more of a boat neck (straight across). I found two big girl patterns and neither is exactly what I want to I got one and I'm going to make it out of junk fabric and then tweak it and then remake the pattern to get what I want. It all comes out perfectly in my head. It will be interesting to see how it comes out in real life.

Amazon's doing an interesting new (to me) thing. I bought a new pool robe last week and it was delivered yesterday and it was NOT good. It was an Amazon 'free return' purchase. So I stuck it back into the bag and printed out a USPS label and took it down to the mail box area. About two hours later the mail carrier did her delivery and picked it up. I checked the tracking number last night to make sure it was in the system and it says it has been handed over to a third party. Amazon, meanwhile, late last night, sent me a note that they had received it and given me my credit.

That kind of efficiency is why I buy from them. Before this, it would take a day or two to go through the USPS system and get delivered.

I do need to do some tidying up around here. Little things left out that need to be put away. Probably a 30 minute effort would take care of it all PLUS folding the laundry. I think I'll get that all done before I start on the envelope shirt.

I did not intend to make this a day of doing stuff but I sure did.

I did go around the house and picked up this and and that. And did two loads of wash and emptied out some drawers that really needed it and cleaned up the kitchen. Oh and changed the sheets on the bed.

And then I got to sewing. I spent a long time with pattern and then made a test shirt. The test shirt fit better than most stuff right off the bat. I hate shoulder seams that don't sit perfectly. Usually I have to tweak them for my narrow lame ass shoulders but not today. So then I got frisky and made some changes and made another test shirt and then fixed the pattern and cut out the beta.

A beta shirt (in this house) is a shirt that is very near ready for expensive fabric but just needs one more try. I found two pieces of leftover fabric that go together and had enough between them to make a shirt. It's all cut out now and ready for assembly. But I'm not. Tomorrow will be soon enough.

The OnBoadDiagnostic plug arrived for my gas tax by mile testing and I got it installed. (unplug the Automatic and plug in the new one - no heavy lifting required)

Country ribs and twice baked potato for dinner. Yum. And a night of TV and knitting. I'm totally cool with all of this.
Collapse