Washington state is testing out road/gas/transportation tax by mile. Instead of a flat tax, taxing according to use. A while back, they asked for volunteers and I signed up and then they said they had more than they needed and would let me know and last night they did... I was in if I wanted to be. I don't remember why I signed up but why the heck not. As usual, I glossed over the details. Life's too short.

They will be sending me a meter thingie to go into my OBD port and, of course, I have an app. It will at least be fun to watch and see what happens.

My phone rang about 5:30 last night and, per usual, I didn't answer it. But got an instant voicemail. My window blinds are in!! a week and a half early!! It was the installer guy. He's coming over tomorrow morning to install them. Yahooooo!

Alexa, Get ready to be movin' some blinds!!

A few years ago, you could connect with people on Google maps and follow them. I could "see", for instance, a friend coming to my house - is he two blocks away, nearly there, at my front door. It was very cool. And then the privacy police landed and arrested all interesting things.

Now, it's kind of back but not nearly as good. My brother and I are connected and it is fun. Especially now that he's on the road. He and his wife are taking a road trip east from there home in Texas. Last night they stayed in a BnB in Vicksberg, MS and this morning I can see that they are at the military park there. He's into all that historical war stuff. There is no genetic vin there. He got it all. But, I'm glad he's getting to scratch his itch and it's fun to follow along the map while he does. I think their next stop is Nashville.

The next stop here is the sewing room. I have a pattern tweak that I just can't seem to figure out. Today I will try again. And I need to get out again - a walk around the block or maybe take the car out to get gas. Pretty exciting stuff.

But, first, I need to get dressed and hang up my swimsuit.

I grew up in the 50's in the Southeastern part of the United States. I don't know if it was everyone or just my family but we did not use drinking straws. If we were eating out (rare) and we got milk shakes or malted milks, then maybe. Otherwise, nope.

And I never picked up the habit. Last Summer Seattle outlawed plastic drinking straws. It was nothing to me, except every time I ordered a drink anywhere, I had to hear how they were not allowed to give me a plastic drinking straw with that drink. Fine. The fancy restaurant at the baseball stadium used paper straws with long, involved apologies to go with them.

For a short while until Mom threatened bodily harm (which was still very legal back then), we would, in a restaurant, tear off the end of the paper rapping and shoot that sucker across the room. But, that's the extent of my drinking straw use.

Until lately. (OMG is she still talking about drinking straws?????) I keep a tall covered container of ice water with me always around the house. (Covered in case it tips over - on it's own or via cat.) I sip on ice water all day long. I hate drinking vessels that 1. sweat and 2. have any metal of any kind near the drinking lip and 3. have a top/cover that is difficult to remove.

I found one that meets all requirements nicely but the cover is not a sipper, it's a straw holder. I bought it anyway and thought I'd just learn to suck on a straw. I finally gave up. I'm not a straw person. Hopefully there's a straw person who shops at the Goodwill cause that's where this vessel is going.

I had planned a discussion of wait staff in restaurants who feel compelled to tell you their names. But, I'll save it.

I took the pattern of my favorite top and made a whole new version of the pattern. If I had any education on how to architect clothing, it would have been a simple job. But I'm really clueless about how you are supposed to do it so I did it the Susandennis Way (tm) and it seems to have worked fine. Tomorrow I'll finish the shirt and then polish off the pattern and plan the next one.

Zoey's been madly batting around something while I typed this entry. She ended up with her little cat butt sticking out from under the credenza, so after I stopped to Instagram her, I got down there with my phone flashlight and pulled out the stuff I could reach. Let's not even discuss the stuff I could not. 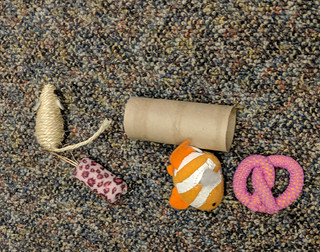 I finished watching Season 2 of Victoria last night. It's so well done. Finally now that the Olympics is over, we've got some TV back.

And speaking of TV, last fall? there was a mini series on the USA Network on that I recorded and never watched called The Sinner. I see now that it's on Netflix, too. Meanwhile my brother found the audio book about that same time and read it instead. It's been sitting in my library unread since then and finally the other night, I gave it a go. Well, now I'm 3 hours in and captivated. This woman can flat out tell a story. I've got 10 hours to go which is a treat. I haven't decided if I'm going to watch the TV version when I finish the book.
Collapse