I had a great swim this morning. Energetic and easy and nice. Then I got home, whipped up a breakfast burrito and sat down with the internet. Now I'm on my second cup of coffee and I've killed nearly an hour and a half with no sign of getting started on my day.

But I did get a little organized. I checked all the financial accounts and paid all the credit card balances off. The I updated the calendar. I never know historical dates like when my last haircut was or when exactly is 30 days from when I started my last inhaler ... stuff like that. Now I have it all entered into my calendar. That little chore has been on my todo list since forever. And now it's done.

My toe is way way better. It still hurts some when pressure hits it wrong but I'm convinced that will be gone in time. At least now I can put on shoes that are good to walk in. And I may do that today. For at least a walk around the block. Or maybe up to the park for a food truck lunch.

But, first. I think I'll get dressed. 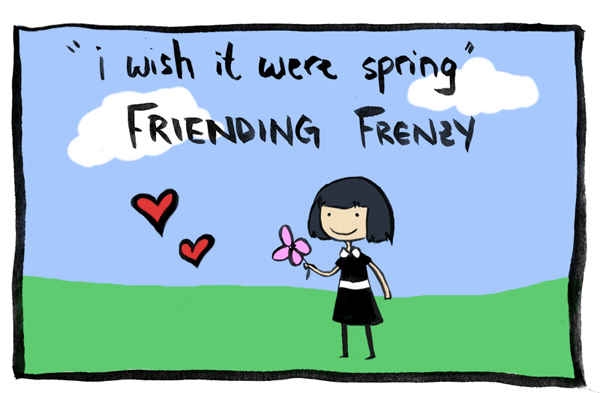 "i wish it were spring" friending frenzy | Right here!

I've been enjoying the music player I got via Kickstarter for swimming. It's heaven to be able to just drag and drop my music on from my chromebook without having to go over to the PC and fire up that godawful iTunes. The player also came with a lap counting app which is actually pretty cool. While I'm swimming along, listening to tunes, I hear a voice telling me how many laps I've done and how long I've been swimming and how fast my last lap was. I have it set to do this every 5 laps (a lap being 50 yards). It's way more handy and cool than I imagined such a thing would be.

They did an update to it last week and it quit telling me the time of my last lap. I missed it. So this morning, I sent the head guy a note with three days of logs and told him about it. They investigated and just now I got a note from him that what I found was a bug and they fixed it. The app is in the Amazon app store and I just got a note saying there's a new version.

Very cool to be able to help developers while I swim.

I worked today on a shirt that I also dreamed up while I was swimming this morning. It was a busy swim. I took one of my all time favorite patterns and made it better, I hope. Better as in made a winter version of a summer pattern. Tomorrow I'll baste on the key piece and if it works, I'll take it off and draft a new pattern out of it to then be able to use over and over again.

Both my tracker and my tummy were happy about a lunch time walk up to the park that has food trucks.

I also did two loads of laundry. Actually I want to go get those things all folded and put away and then I'm taking the rest of the day off!
Collapse