I'm sitting here in the living room internetting and getting increasingly colder. The sun is coming through the windows but only causing glare, not warmth. It's 8 am. Why so cold. Must be my imagination. Nope. Just looked at the thermometer... it's 60 fucking degrees in here. That's 15 in the hipster countries. No wonder I'm cold.

I also notice that the sliding glass door has water spots on it. Now, they could be older ones showing up because of the sun. Or they could be evidence that the ceiling leak is back. I vote for the former. We're supposed to have some rain tomorrow night so I'll be keeping a close eye on that situation.

The JoJo Moyes book that I made disparaging remarks about when I first started it, totally turned on me. I'm hopelessly sucked in. I generally only listen to books for the hour before I turn out the lights and go to sleep. But, I want to hit play now and find out what Louisa Clark has been up to since I hit pause last night. But there are only 4 hours left and I want to make them last as long as possible. This is one that will make finding the next good thing to read a really difficult chore.

It's warmer in the sewing room so I think I'll go sew.

After my dad died, my Mom had trouble spending money. She may have the same problem while he was alive but he handled it. After he died, I helped her with her finances. She would agonize over some perfume she wanted or a blouse she saw and also over the big things like a new sofa. I kept telling her to buy, spend, do what she wanted. She had the money and You Can't Take It With You!

One of the most fond memories I have of her at that time is when we went to Target. Target came to Charleston and she was so excited. My brother and sister-in-law took her but, much as I love him, shopping in a store like Target with my brother is agonizing. He would rather have a root canal. So they didn't get to stay long. Mom wanted to go and stay forever.

So the next time I was there, we hopped in the car first thing in the morning and headed to Target. I told her she could take as long as she wanted and if that wasn't enough we'd come back tomorrow. I put her in one of those mobility scooters they have and off we went. She examined every single inch of that very large Target store. She filled up her basket before she'd done half the store. So I followed with a second cart that she then also filled up.

She got herself all new bedding and all kinds of other stuff. But, mainly she had a ball. Towards the end of the shopping when both carts were full, she found a shopping cart. About 18" long and 12" high with wheels and even that little front shelf for your purse. We both loved it. She hesitated but snapped it up and put the little cart on top of the cart. It sat on her counter in her little assisted living suite and, at least when I was there, everyone who came in remarked on it. And she got to tell the tale of her amazing Target shopping day over and over again.

My brother and sister helped clear out her things after she died. I was not there. All I asked for of all her stuff was that shopping cart. My sister, after noting what a waste of shipping charges it was to send 'that stupid thing', did get it to me. And it sits in my kitchen today. Every time my eyes go by it, I think about Mom and the fun we had that day. Spending money on things on silly things or unnecessary things can be wasteful and also can be so gratifying. 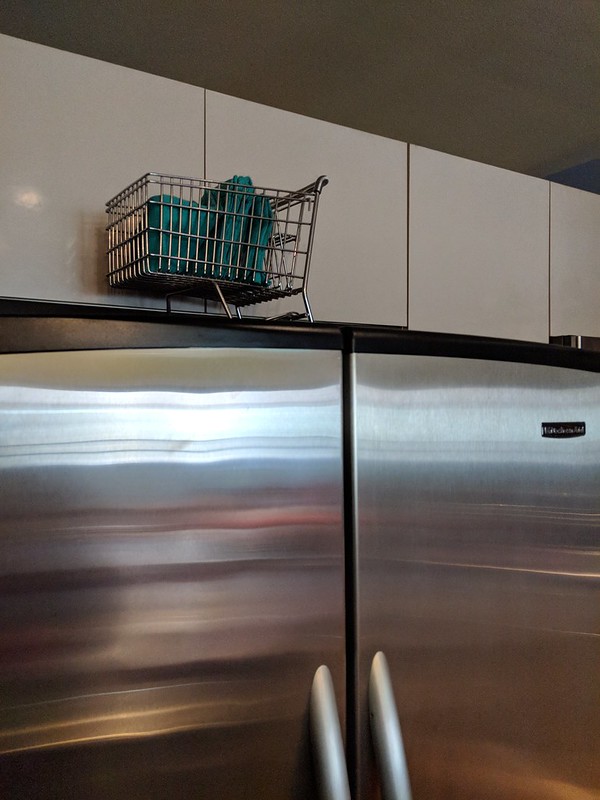 I've wanted to replace my window blinds now for about a year. They are only 3 years old but their tech feels like they are 23 years old. Also, I made the mistake 3 years ago of not getting insulated shades. I got a quote from the shade guy a few months ago and have been chewing on spending the money since then.

This morning I lowered the blinds a bit to block the sun and now one of them won't go back up. I'm sure it needs new batteries or something equally as simple but to me it was a sign. Order the new shades. It's only money and you can't take it with you.

So I sent an email to Jordan, the shade guy, who reinforced my decision by calling me 10 minutes later to set up a time to meet and talk colors tomorrow at 12:30. His rapid response was all the validation I needed. Nice.

And speaking of spending money, I think I'm going to 13 Coins for dinner. It's fried chicken night. And, my tracker wants more steps. Seems like a perfect way to kill two birds... so to speak.

My brother and I have decided to blow off Hulu at the end of the trial. I've enjoyed watching some stuff but not enough to pay for it. Plus now there's stuff on Netflix that I haven't seen yet. So weird. I feel like I don't have anything to watch and so I buy a new service and then I don't have time to watch anything. I think something's broken in my plan and it's more than likely me.

Soon we will throw baseball in the mix.

Oh, I just remembered laundry. Someone needs to fold it up and put it away. Zoey just wandered by and allowed as how she would put all of her clothes away but none of mine. So...
Collapse